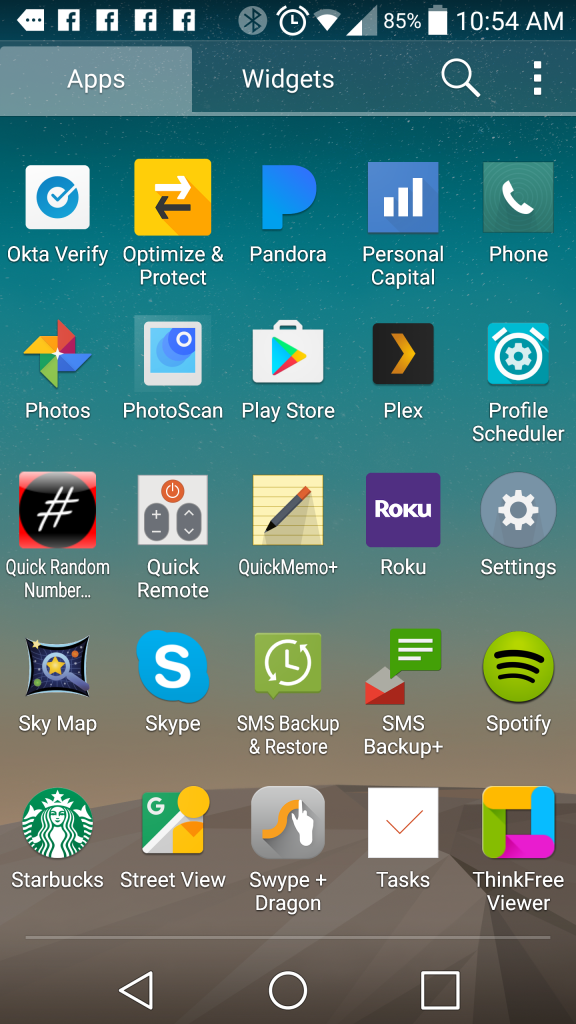 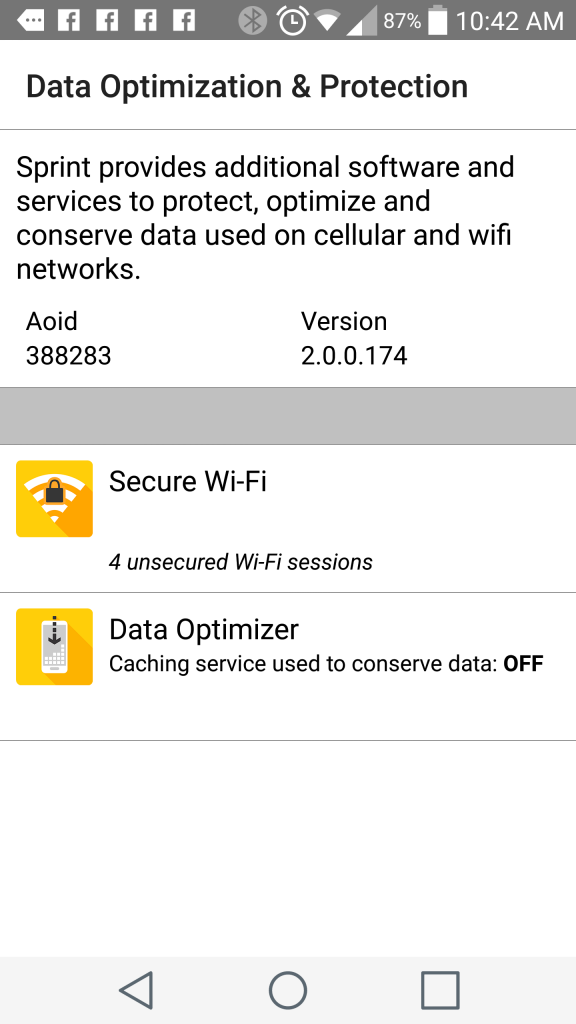 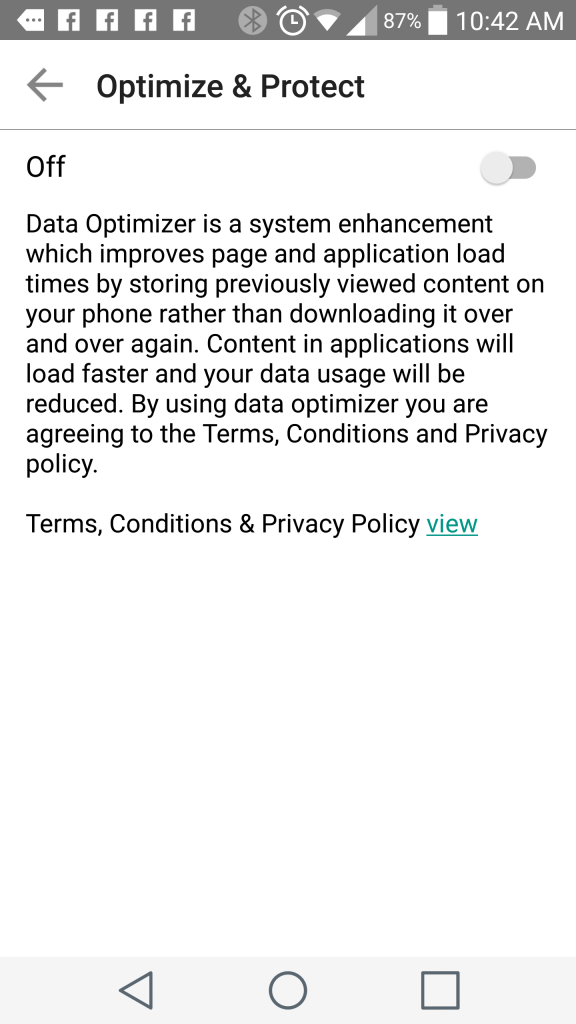 For about three weeks (end of June 2015 until mid July 2015), when I tried to go to a web page on my phone using Google’s Chrome browser (my default browser), about 2 out of 3 web pages wouldn’t load.  Instead, the bar at the top would freeze about half way and then nothing would happen.  Kind of like this:

Initially, I didn’t think it was a big deal as it was only a page or two.  But when it continued, I started to get really frustrated.  That’s when I started trying to solve the problem.  What follows are all the things I tried that didn’t work, followed by the actual solution:

My first attempted solution was to clear the cache and all the data the Chrome browser had stored.  That didn’t help.

Thinking the problem may be with the Chrome browser, I started using the default browser that ships with Android.  Of course, that browser is very similar to Chrome (they are based on the same base software, Chromium).  So, when the stock browser had the same problems, I thought it might be still related to the Chromium browser base.

This led to Wrong Solution #3.

I installed Mozilla’s mobile browser for Android thinking the problem was with Chrome.  Nope.  The same thing happened in Mozilla’s browser – it would freeze after loading about half way and never finish.

At that point, I wasn’t really sure what to do as I had tried three of the most popular mobile browsers for Android and all were having the same issue.  But something else happened that started to lead me down a different path.  I also use Feedly for my news.  Feedly started having issues as well.  I would simply try to open the app and it would just sit on the “loading” screen indefinitely, like this:

Occasionally it would load, but sometimes it would take upwards of 10 minutes or more.  I checked Feedly’s website and searched online to see if there were problems with Feedly loading for other people and no one was reporting any.  Whatever the problem was, it seemed to be unique to me and my phone.

Not sure what to do about Feedly, I tried deleting all of its cached files and other data.  That didn’t fix the problem.

I then tried to uninstall the Feedly app and reinstall it.  That worked, one time.  Then the problem returned.

At this point, I was kind of at wit’s end.  Two of the apps I use really often were not working – Chrome, and Feedly.  I didn’t know what else to do. Then I started considering what the two have in common.  That led me to realize that I had an ad blocking app installed.  I wondered if the ad blocking app was some how causing the two apps not to work.  That would be pretty nasty of both Google and Feedly, to reduce their functionality because I wasn’t looking at their ads.  But I was getting desperate.

I removed the ad blocking app.  That didn’t work.  Both problems remained

My last smartphone, a Samsung Galaxy S3, would periodically start running a bit slower and I would start getting weird messages (sometimes ads).  That usually meant I had installed some app I should not have (I like trying out new apps) and then I would go through and uninstall as many unnecessary apps as I could (and if that didn’t solve the problem, I’d wipe the phone and start over).  Thinking I may need to do the same thing on my LG G3, I started scanning through all the apps on the phone.  I found a few I could uninstall, but I haven’t actually tried out that many new apps.  However, in the process of scanning through the apps I had installed, I found one I didn’t recognize.  The app is called “Data Optimizer.”  I knew I didn’t install that.  Plus, something with a name like “Data Optimizer” just sounds sketchy to me.  So, I selected it to see what it was, and that’s when I found the problem.

Data Optimizer is a Sprint app.  I’m guessing it tries to cache data from websites or compress that data in order to make websites load faster or improve the browsing experience.  I don’t know for sure, as there isn’t tons of information about that app readily available online (if you search for it, you usually get information on Sprint’s Connection Optimizer, which is completely different).  But what I did see is that the app had mountains of data stored on my phone.  Here’s a screenshot from after I turned the app off:

When I initially opened up the Data Optimizer app, under Storage, the Total was 1.6 gigabytes.  Most of that was Cached data.  Perhaps the app is designed to periodically clear out the cache and stored data and for some reason it didn’t on my phone.  Perhaps not.  What I can gather is that this app was caching a ton of data, supposedly to help improve my browsing experience.  But something went wrong somewhere and instead of speeding things up, the app completely destroyed my browsing experience.  I’m assuming that both Chrome and Feedly were trying to access files in the Data Optimizer cache, but because it was so huge, it was having a hard time retrieving those files.  As a result, both Chrome and Feedly were freezing up most of the time.

Anyway, I deleted the cache and all the stored files, then tried opening up Feedly and Chrome.  Both worked perfectly, as if the phone were brand new again.  The Data Optimizer app was the problem!

Again, the above screen capture of the Data Optimizer app is from after I cleared the cache and deleted all the stored files.  I also disabled the app (that’s why there is now an “enable” button in the app) to prevent it from doing this again.  Not sure if I should enable the app now, but I don’t want to run into the same problem in three months when the app’s stored files get huge again.  So, I’m just going to leave it off and see what happens.

Anyway, I’m posting this here in case anyone else runs into the same problem.  It turns out, an app that was supposed to speed up web browsing was what had killed my web browsing, slowing it to a crawl or stopping it altogether.  Sprint’s Data Optimizer app was the problem.  Once I realized this, I was tempted to root my phone just to get rid of that app.  But it appears that the app is now permanently disabled, so I shouldn’t have the same problem again.  At least, I hope not!

As my regular readers know, Debi and I recently bought new cellphones that run the Android operating system. For about three years before that, we were running an old Windows Mobile OS (I think version 5). On our old phones, I had installed an ebook reader that allowed me to copy and paste text from the books I was reading (no DRM, of course) to a word file. The ebooks that would allow that were ebooks I had created myself. This was a necessary feature for me because of how I read books – I copy and paste or highlight text then use that text when I’m done reading the book to write the book review. So, imagine my disappointment when the two most highly rated ebook reading applications in the Android store – Aldiko and Wordplayer – turned out not to have the ability to copy, paste, or highlight an ebook. Wordplayer had the ability to add a bookmark, but that’s as close as I could get. After some lengthy searching, I ended up right back at the application I used to use on my old Windows Mobile phone – eReader.  It turns out the free ebook reading app from eReader.com does have the ability to copy, paste, and highlight text in non-DRM books.  So, here are instructions on how to put an ebook on an Android phone in eReader.

For the average user, of course, you’re probably just going to buy books from various online marketplaces, like Amazon (using the Kindle app) or from eReader.com.  So, the above will likely be unnecessary.  But given the specific requirement of someone creating their own ebook that can be annotated, this is the way to do it on Android devices.