I have been collecting music files for decades, like a lot of people. My total collection includes over 10,000 tracks. When I built my own NAS recently, I decided it was time to do a careful audit of my music as I hadn’t organized my music in a very long time. In the process, I realized that I had to decide on a clear naming convention system for my music.

There are some tricky components to this. Assuming you want all of your music in one main folder (not everyone does), the next question is what level of folder comes next. I’ve typically used the Artist as the next folder, so the folder structure looks like this:

I typically use software to manage the renaming and also add the information to the tags at the same time to make this easier. In the process, I realized that the structure above should really be:

However, using “ALBUM ARTIST” can also be advantageous when the album is primarily by one person but they have a guest artist on one or two tracks. Using the primary artist as the “ALBUM ARTIST” solves the problem of the separate tracks being organized in a different folder.

The next level below ALBUM ARTIST is the ALBUM TITLE, like this:

This structure generally works for most artists and albums to keep things relatively organized. The next issue is the naming convention for the song files themselves. I don’t think this part matters as much, but I have seen different approaches. Some seem to think that including the name of the artist and the album in the name of the file along with the track number and title of the track is necessary, like this:

Alternatively, since the file itself is organized within folders that indicate the artist and album, others use the following convention:

This results in shorter names for the files themselves. I’m not sure that there is a better or worse approach. However, including the artist and album title does run a higher risk of running into a character limit for a track (on most operating systems, files can only have a 255 character name).

In light of the file name length concern, I have opted to go with the second, shorter naming convention. Here’s an actual example from a recent album purchase:

Finally, there is also the issue of multi-disc albums. I used to put the different discs into separate folders. Now, I add the disc number at the beginning of the file name, like so:

The software I have used for quite some time for playing my music, Clementine, has had some issues with recent releases, leading me to switch to a forked version called Strawberry. However, as I’ve worked with both of these, I’ve come to realize that their ability to manage ID3 tags and lookup up metadata and tag information is problematic. As a result, I’ve switched to using Picard, that relies on MusicBrainz directly (the other two have implementations of this that are buggy in the latest versions of the software).

Picard also does the best job of actually filling out all of the information in the ID3 container, pulling in as much information as possible. As I result, I’ve switched to using Picard for tagging my music.

As for organizing the files, I switch back and forth between having Clementine/Strawberry organize the files (when I import them, I do this), but when I complete the tag information in Picard, I often have Picard redo this just to make sure everything is organized correctly.

In the almost 15 years I’ve been using Linux I have gone through a number of music playing apps. From Amarok to Banshee to Rhythmbox and at least a few more. My favorite at the moment is Clementine. I’ve grown to really like the basic interface of Clementine and it does a good job with pretty much everything I need.

The one issue I had with it over the years is that I didn’t think I could use it to add music to my music library and organize it at the same time. Turns out, I was wrong. Clementine does have the ability to add songs to your music library and organize them (into folders and renaming the files). It’s just not the most intuitive process. So, I figured I’d outline the process below.

You’ll then need to set your music directory in Clementine which is where you want to store your music files. Go to Tools -> Preferences. 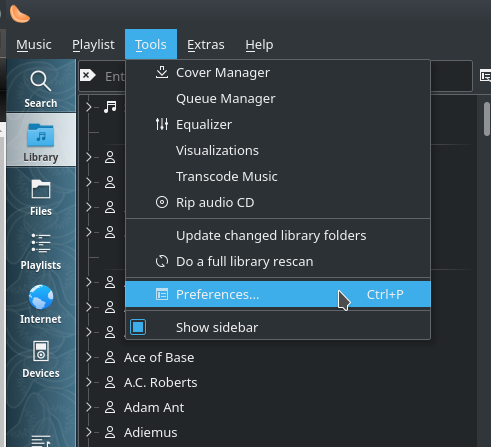 In the window that opens, click on “Music Library” and then add the folder where you want to store your music: 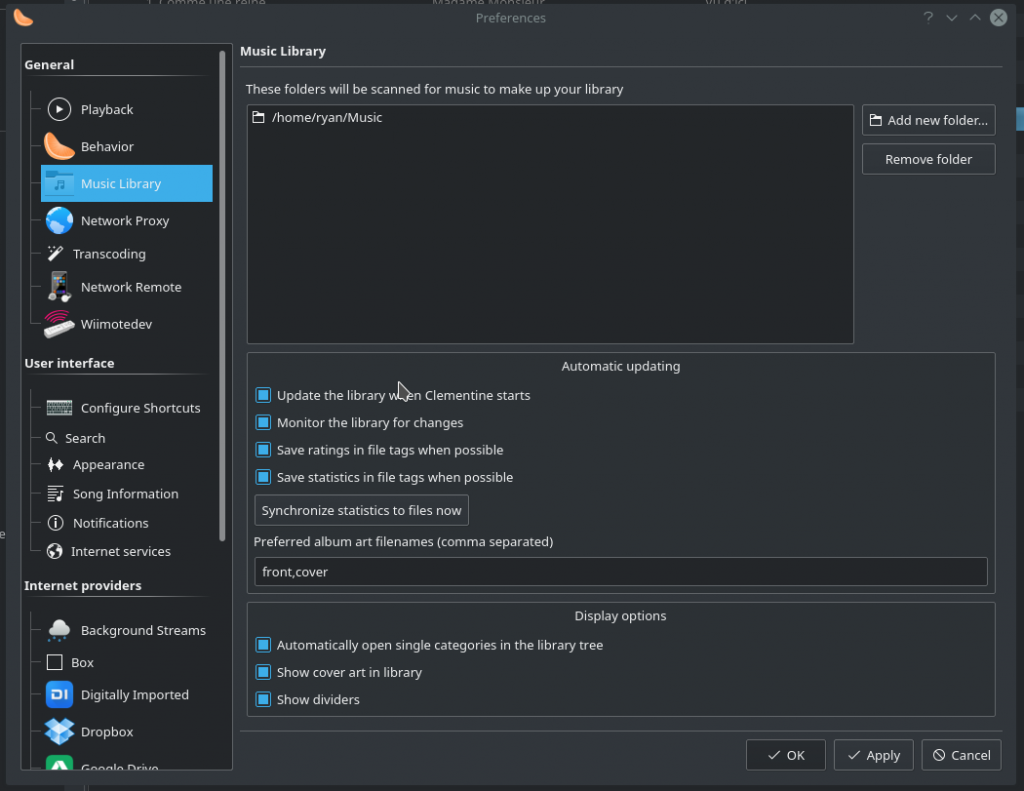 Next, to add music to your folder, go to the left side of Clementine and look for where it says “Files”:

Click on that and you’ll be able to browse to any folder on your computer. 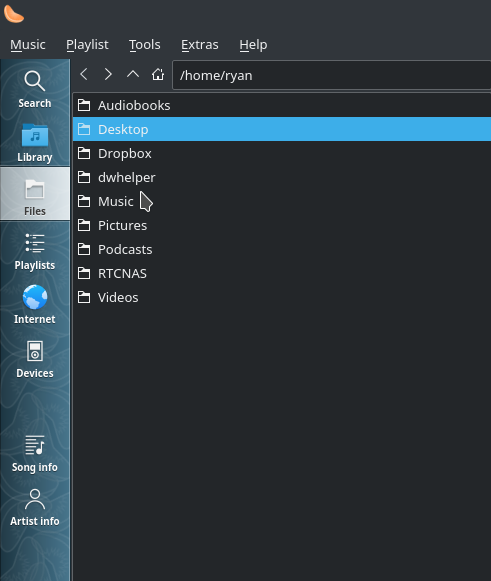 I usually put the music I want to add to my collection on my desktop, so I navigate there, find the folder, and then right-click on it. In the context menu that comes up, click on “Copy to library.” 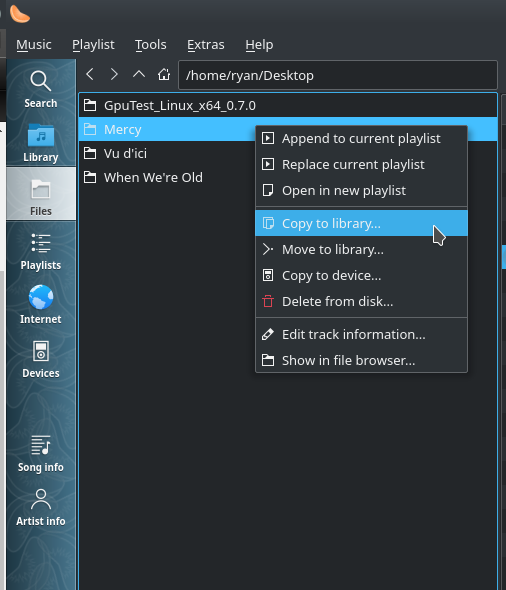 In the window that comes up next, you’ll have the option to change how the files are organized, both at the folder level and with the renaming of files. 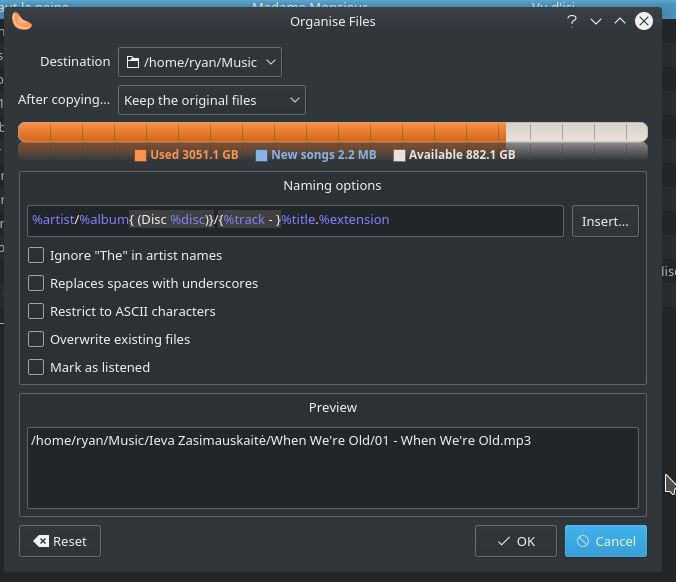