Debi and I went to Tall Stacks this past weekend (Saturday). One of our dance students from the Copacabanna set up a deal to get tickets on the Salsa cruise on the Harriet Bishop. We thought it might be fun, so we paid the $30 per ticket to see what all the fuss is about.

We headed down to the river early to check out the rest of Tall Stacks, getting there around 6:30 or so. We walked through the whole shindig on the Ohio side. There were a ton of people there, though, intriguingly, the only black people we saw were working (odd for a city that has such a large population of blacks… not sure what the deal was). There’s something about these types of events that doesn’t really appeal to us. Part of it is we are cheap and everything there costs an arm and a leg. Honestly, and this is going to reveal our true, geeky nature, I think we’d have more fun at a Star Trek convention… We kind of got the impression that it was really just kind of an excuse for people to get together and drink.

Anyway, we did meet up with a fellow graduate student and his wife at one of the musical performances. The band was Rhett Williams and the True Believers. The music was pretty good and, as is always the case with this particular grad student, the conversation was good. We enjoyed that part. An added “bonus” – they shot off fireworks while we were there, which was kind of fun (I have mixed feelings toward fireworks… they are very expensive and I think the money could be better spent). I don’t think I’d mind occasionally visiting an event like this for the music, but I think my graduate student guilt complex is too ingrained to allow me do this often – I like listening to music, but only as I do something, anything. Hanging out with friends will do, but only if I don’t have to yell over the music…

We left the concert a bit before it was over and headed across the Purple People Bridge to Newport-on-the-Levee to find a place for dinner. We’ve eaten at the Irish Pub there and it’s pretty good, but I was in the mood for something different. So, we went to a new Japanese place called Aio. Debi was skeptical, considering our dining experience in Japan. I mistook this restaurant for Pacific Moon, an Asian Fusion restaurant that recently opened, and thought they would have more vegetarian options. Oops! Not surprisingly for a Japanese restaurant, they hardly had anything vegetarian on the menu. So, we ended up getting vegetable tempura, a tofu salad with wasabi sauce, and a vegetarian sushi roll. It was good, but I can’t recommend the restaurant for vegetarians – the selection is just way too limited. It’s a nice place and not too expensive; so, if you’re not vegetarian and like Japanese food, you may want to give it a whirl.

On the way back across the bridge I snapped a few shots of downtown, something I’ve wanted to do for a year or so now: 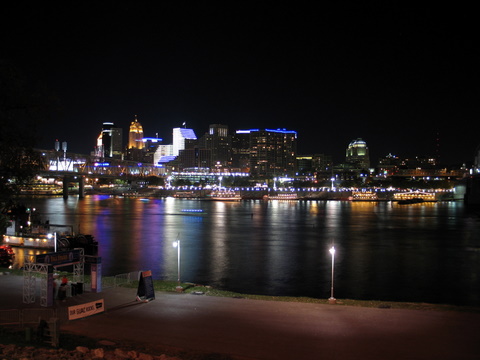 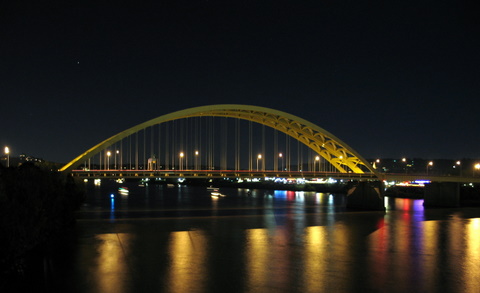 I really never get downtown – this was the first time I’d walked the Purple People Bridge. It offers some great views. While I was snapping some photos Debi bought some candied pecans, which complimented our Japanese meal quite well (sweet with protein).

We made it back across the bridge just in time to board our cruise – a paddle boat called the Harriett Bishop. We had carried our dance shoes with us the entire time just to dance on the boat and were kind of excited. When we boarded the ship and saw the dance floor, our excitement crashed… The dance floor could comfortably accommodate one, yep, that’s right, 1 couple! It was probably 8 feet wide by 16 feet long. That would be good for two or three couples, but for some reason the band and singers set up on 1/2 the dance floor, cutting it down to an 8′ by 8′ square. It was tiny. Disappointed, we headed up to the second and then the third floors to see if there was additional dancing space. Nope. There was a bar on each floor, but otherwise it was jam-packed with chairs and tables. It was at this point I realized the purpose of these cruises – drinking! My earlier assumption about the purpose of festivals like Tall Stacks was confirmed. There weren’t even speakers to pump the music from the bottom floor up to the other two floors. And the sound didn’t carry. So, if you were on the third floor, not only could you not dance, but you wouldn’t even be able to hear the music. That left one thing to do – drink!!!

Determined to dance, we went back down to the bottom floor and squeezed into a couple of chairs. The band started up and… nothing. No one was dancing. The music was good and the band was fun, but no couples seemed courageous enough to put on a show for the 100 or so people packed into that microscopic room. If you danced you’d basically be doing a show since no one else could take to the floor while you were on it. After two numbers came and went and no one took to the floor, I told Debi to put on her shoes – we brought them and we were dancing. Salsa isn’t our best dance (that honor probably goes to Cha Cha), but we went to dance so we were going to dance. As it just so happened, two other very good couples decided to take to the floor on that same dance. Oh well, the three of us did what we could in that tiny space. It was fun, but oh so cramped…

We did a few more dances – they played a couple Cha Chas, more Salsa, and a Merengue and even a quasi-Rumba. Eventually the floor filled up and it wasn’t really worth it. So, we just watched and talked with some of the other people there.

Speaking of which, we actually knew a lot of people on the cruise. The person from our class who set it up came with her boyfriend (whom she met on eHarmony, I kid you not). The owner of the Copacabanna, Rhea, was there, along with another couple that competes and teaches. Several more of our students came as well, including two adolescents who are probably only 16 or so. When I saw them dancing I said to Debi, “Where do we know him from?” She didn’t remember but then it dawned on me that we taught them the Salsa about 2 months ago. Just as I realized this the boy’s father leaned over to me and said, “Do you remember them? You taught them to Salsa a while back.” I replied, “I was just realizing that.” Then I added, “I’m amazed they remember it so well; they’re doing really well out there.” They were, in fact, remembering all of the steps we taught them. That was nice to witness for a teacher. Some of our other students ventured out onto the floor as well.

Anyway, it was a fun experience, but the microscopic dance floor was a big drawback. I don’t know who planned this thing, but if they consider doing it again in the future, they’ll have much happier patrons if they do the following:

If they made those changes, I’d do it again. If they don’t, well, I’m not really interested…

The cruise left the dock at around 10:30 and got back at around 12:00am. We disembarked and headed back toward our car. Along the way we passed one of the stages where the bands play and were astonished to find this: 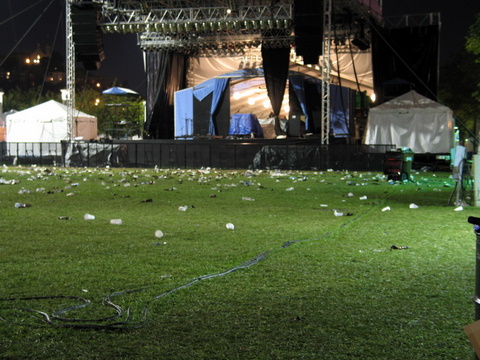 As you can tell, we don’t get out much. This is probably typical for such events. Even so, the picture doesn’t really do it justice. There were bottles and cups and all sorts of other junk littering the entire field. It was sad… I mean, okay, I understand people accidentally dropping a cup or two, but damn! What a bunch of lazy asses! The one “up side” to throwing trash on the ground – it will bring more blacks to Tall Stacks… to clean up after the inconsiderate white slobs who can’t clean up after themselves! And yes, that was sarcastic.

Overall, Tall Stacks has a lot of potential and clearly is popular among white people in the Tri-State area of Cincinnati (I don’t know why there were no blacks there – honestly, I saw more Indians than blacks). If we’re here in four years, maybe we’ll go on the ice cream or dessert cruise… Anyone interested?