In preparation for my class on sex work tomorrow (it’s a class on human sexuality) I did a little sniffing around to see what I could find on prostitution in Cincinnati. One of the first thoughts that came to mind was to see if the Cincinnati Police had any statistics on their website regarding prostitution. They didn’t have anything easily digestible, but they do have a complete list of their arrests online. After I got over the shock that the Cincinnati Police made 50,000 arrests in 2006 (seriously, it was like 49,997) in a city with close to 300,000 people in it (if it were not for repeat arrests that would mean 1 in 6 people was arrested in Cincinnati in 2006), I found what I was looking for… sort of. Any criminologists reading this (hint, hint, Mike) will probably correct my analysis, but my cursory examination of the data revealed the following prostitution information:

I’m sure the numbers are probably a bit higher, but this was the clearest indication of prostitution and sex work I found in the arrest records, so I went with it. There are, of course, a few intriguing things about the above. First, more women are arrested than men. Certainly more women are sex workers than are men, but why aren’t more “Johns” arrested for solicitation than are the sex workers themselves? (This is aside from the fact that I think prostitution should be legalized and regulated to protect the workers, but that’s a different issue.) Also, more blacks than whites? Even though blacks make up a large percentage of the population of Cincinnati, that is a disproportionate share of arrests for prostitution. Are blacks more likely to: (1) sell sex, (2) buy sex? My guess is that neither of those are true. The real answer, and I’m only speculating here (again, criminologists’ views are welcome), is that whites, given their higher SES, are more likely to frequent sex workers who are not on the street (e.g., escorts or call services rather than streetwalkers). Streetwalkers are, by definition, more public and more prone to arrest and police harassment.

Finally, one nifty element of the arrest spreadsheet is that it includes the actual address of the arrest. A quick import into Streets and Trips and I was able to plot almost all of the arrests in 2006 for prostitution on a map of Cincinnati (this is just the jurisdiction of the Cincinnati Police, so it is limited to a relatively small geographic area). (Note: Click on the image to see it full size): 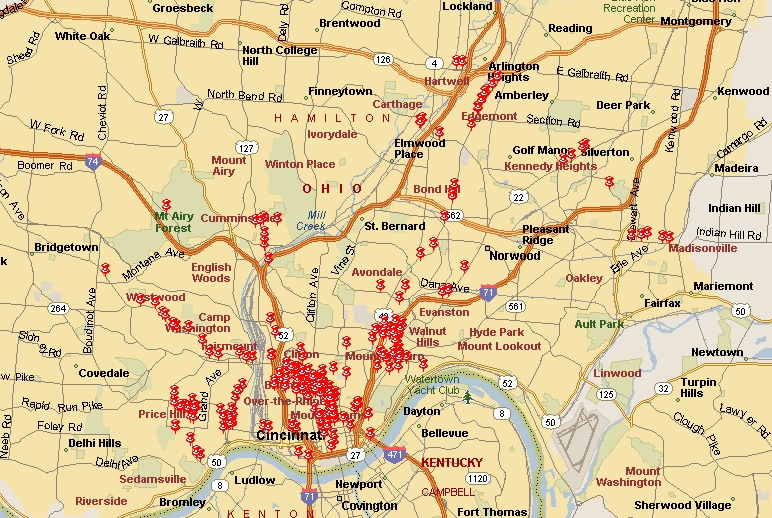 Living in a relatively quite, semi-suburban neighborhood, I don’t see many streetwalkers nearby. I’m not completely oblivious; I know prostitution is taking place despite it being illegal (see comment on legality above). I just didn’t know where it was happening. I can’t say I’m stunned by this, but it is kind of interesting to see.