We spent most of the morning picking up Debi’s sister, Suzy, and her husband and baby, Brent and Ethan, respectively, along with picking up cars and arranging transportation. Debi’s parents rented a mini-van, which I drove most of the time. But with Suzy et al. there, we didn’t have enough room in the mini-van. And since I needed a car to drive to Arizona anyway (see next post), we ended up renting a second car, giving Brent the wheel of the mini-van and I drove the car. After getting all the transportation arranged we headed to the Getty Villa, in Malibu. I had heard of the Getty Museum, but not of the Getty Villa. For those who don’t know what it is, it’s an amazing recreation of a Roman Villa. It’s enormous, beautiful, and remarkable. It is filled with all sorts of Classical artifacts, mostly from Rome (most are between 1800 and 2600 years old), but also from a few other places. Here are a couple pictures to illustrate just how beautiful it is: 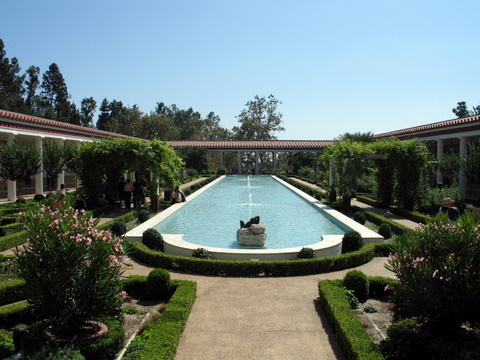 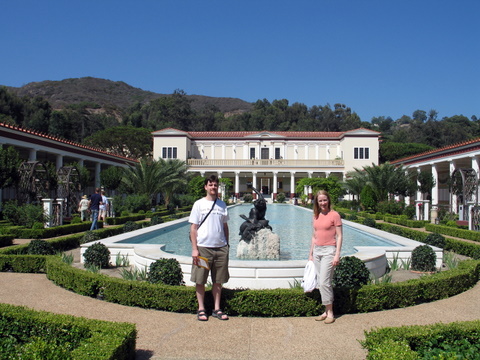 We spent a few hours here learning about Roman architecture and history. We then headed back to the hotel then out to dinner at a Persian restaurant called Javan. It was okay, but different. I think I would have liked a different dish than what I ordered, but so it goes. The dessert I had, a coconut mango ice cream, was awesome. That about wrapped things up for Day 3.