Mark and I woke up around 5:45 to get ready for the hike. Tom, well, Tom had been up all night anyway and was semi-awake when we got up. For those who don’t know the intimate details of our trio, Tom may not do the most hiking of the bunch (Mark and I probably hike more than he does), but he is generally in the best shape and is able to run up mountains. So, when Tom weakly sat up and asked, “Do you think I should try to do the hike?” both Mark and I knew he was in bad shape. I’m not a physician, so I deferred to Mark (who is), but didn’t think he should. Mark pointed out the major issue – dehydration. Tom hadn’t been able to keep down water, let alone any food. If he attempted the hike there was a good chance he just wouldn’t make it… And it may even result in something worse, like him collapsing half way up and needing help getting out. So, we encouraged him to just stay in the hotel room. We offered to do something else rather than hike so we could spend time together, but Tom insisted we do the hike. So, Mark and I headed out around 6:30 for the trail head.

The hike starts at the Arizona Snow Bowl, which is a ski resort. When we arrived around 7:00 there were probably 20 cars in the parking lot, which made us think we’d see a lot of people on the trail. We started out around 7:15. The trail crosses a few ski runs then heads into the trees. It then works its way up a number of switchbacks until it reaches both the treeline and a saddle at the same time – the saddle is right on the tree line. In my estimate, the saddle is about 2/3 of the way to the top. We reached the saddle around 9:45 or 10:00. From the saddle you follow a mostly defined trail north, passing below the ridges of several smaller peaks. This part of the trail can be somewhat deceptive as it gives the impression several times that you are at the top or heading to the summit but then you reach that point and see another summit beyond it. Expect another 45 minutes to an hour of hiking from the saddle to reach the summit.

The nice thing about this hike is that from the saddle to the summit you don’t rapidly increase much in elevation (there is a sharper incline just below the saddle than anywhere above the saddle). This is the first summit I’ve reached in years where I walked up to the top and wasn’t completely out of breath and feeling like I wanted to die. We reached the summit around 11:00. There were three young hikers up there (though about 10 left just before we got there). We chatted with them for a while then they left, leaving the summit for Mark and me. We stayed for about 45 minutes, snacking, taking photos, and engaging in our yearly tradition of brushing our teeth on the summit. Mark also made a few phone calls, though the reception was a little spotty.

We dropped off the summit around 11:45 and followed a relaxed pace back down, reaching the trail head around 2:00 or 2:30. Once down we called Tom, who was waiting downtown to meet up with us. We found out later that Tom came up to the trailhead after checking out of the hotel. His plan was to hike up the trail a ways then hike out with us. But someone gave him bad directions and he ended up hiking for about an hour on the wrong trail. It was probably the right decision for him not to hike with us as he reported he made very slow progress while he was hiking, stopping frequently to rest.

Anyway, we met up with Tom then stopped at a subway for a late lunch and to exchange photos. Here are a few good ones:

Mark and me at the trail head before the hike: 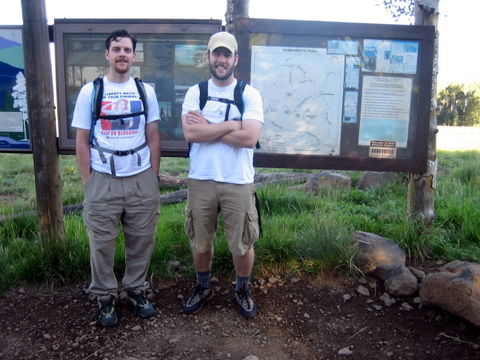 Here I am working my way up to the summit: 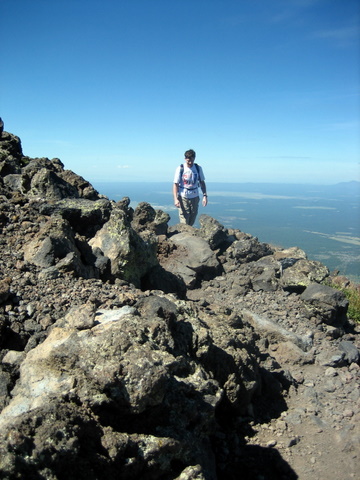 Mark and me on the summit: 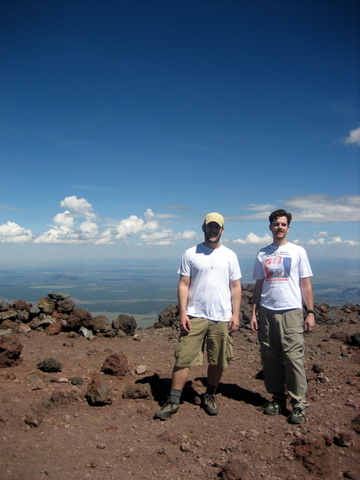 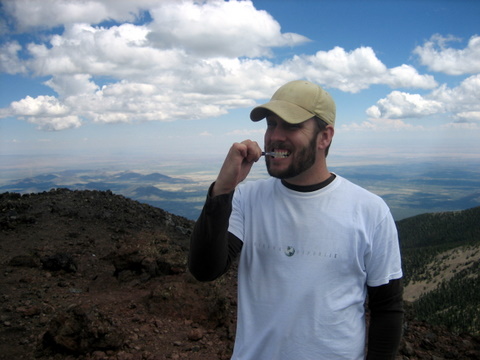 I left Flagstaff around 3:30, hoping to make it to Los Angeles around 10:00. I once again set the cruise control for about 85. I hit Barstow around 8:15 or so, refueled, then grabbed a bite to eat. From Barstow on the traffic was heavy, but still moving pretty good. I’m guessing it was all the weekend gamblers returning from Vegas. I made pretty good time and arrived home around 10:15, where Debi had a towel waiting for me, as I was pretty stinking after a big hike and long drive home.