I forgot to mention one fun thing that happened the previous night. We had just finished setting up camp and it was getting dark when I heard a loud rustling in the brush near our camp. It was loud enough that I though someone was walking through the brush. When it finally stopped, I thought I could hear something in the dark coming toward our camp. I was a little nervous at first, but I figured whatever it was couldn’t be that big as I couldn’t really see it. I donned my headlamp and went investigating. Turns out it was an armadillo. This was the first time I had seen an armadillo live and in the wild. A friend of mine described them as bumbling blind tanks. He couldn’t have been more accurate. The armadillo bumbled into the camp next to ours (which was empty at the time) and started bumping into things – logs, tables, etc. It seemed pretty oblivious and didn’t even seem to care that Debi and I were watching it. It bumbled around for a good 30 minutes before heading off into the brush again. Funny animals, those armadillos.

The next morning we drove back into Sarasota. Our first stop was the MOTE Aquarium. As geeks, that’s the kind of thing we tend to do. It was funny – most of the people there our age had kids. We presume they were only there because of the kids, but we had a great time. We asked a bunch of questions of a couple of the volunteer docents and they went out of their way to help us. Debi had never seen a live sand dollar (neither had I, but I also didn’t realize it was a living creature – I’m a sociologist, damnit, not a biologist!). In one of the touch pools they have a bunch of mollusks, including live sand dollars. The tricky thing with sand dollars is that they burrow under the sand, so you literally have to dig for them to find them. One of he docents spent about 10 minutes digging for one just for Debi. It was very cool. I didn’t take a picture, but here’s a good one courtesy of Wikipedia. The aquarium isn’t huge, but is probably a medium-sized aquarium. The really cool thing about it is the scientific side – MOTE isn’t just an aquarium but also a cutting edge research station. And they integrate the science into what they do.

They also have a second building for sea turtles and marine mammals which is used primarily for rehabilitating animals that have had problems (caught in nets, sick, injured, etc.). When we went they had three sea turtles, one of which is completely blind. They have two adult manatees and two dolphins. You can’t see the actual medical center where they are treating the injured animals, but the docents told us they had a number of additional animals there. We were, in our typical fashion, pestering the docents with questions. Debi asked a good one about manatees, “How do they sleep?” That’s a tricky one, when you think about it – manatees can’t leave the water nor can they move into shallow water where they are completely exposed as they can’t move themselves back into deeper water. So, how do they sleep? Turns out they are basically narcoleptics – they can fall asleep instantly and they nap for about 20 minutes during which time they might sink to the bottom. But that is about as long as they can hold their breath before they have to resurface. I then asked about their extinction status, “Why, if they have no natural predators, are they in trouble?” Turns out they do have a natural predator – humans. I knew about the speedboat issues (manatees regularly get hit by propellers), but I didn’t realize manatees were actually hunted by primitive groups. Here’s why – they taste like bacon! I kid you not; I asked. I apologized ahead of time, but I was wondering why someone would hunt one unless they tasted good. Apparently they are bacon-y. Also, their ribs don’t have a marrow – they are completely solid, making them great clubs for humans. But that leads to other questions, “Is that why they don’t dive deep?” (it is – dolphins have flexible ribs that expand and contract with their lungs) and “Where do they produce their blood cells?” (I stumped the docent on this one); it is probably in their other bones, but that is weird considering our ribs have marrows.

After we finished bugging the docents at MOTE (we were there for a good four hours or so), we headed over to the Ringling Estate. I had the wrong impression from the website – I was under the impression that there was just a small museum or two there along with the Ringling mansion. Nope! This is really more of an all day deal. We arrived around 3:00 pm and it closes at 5:30. If you’re going to go to the Ringling Estate, give yourself at least a good 5 or 6 hours as there is a ton to see.

Rushed, we hit all the big things. We stopped by the miniature circus museum first. This really is remarkable to see, even though I’ve never been to a circus other than Cirque du Soleil. You learn about just how big of a production this was in its heyday (the early 1900s) and how amazingly organized it was. Here are a couple pics of the miniature circus known as “The Howard Bros. Circus“: 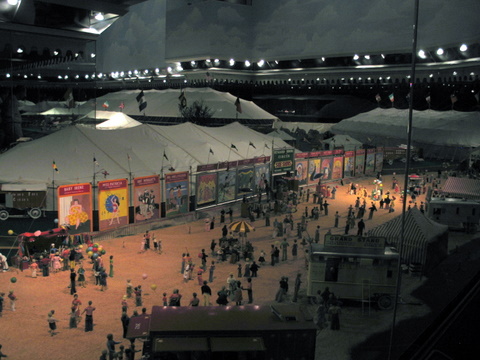 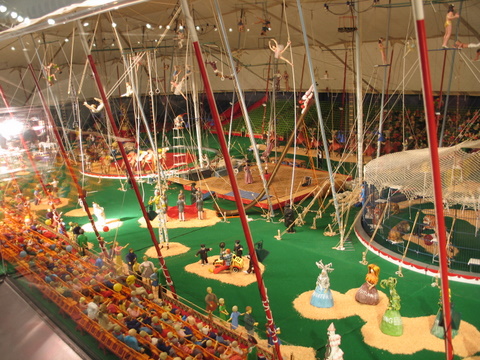 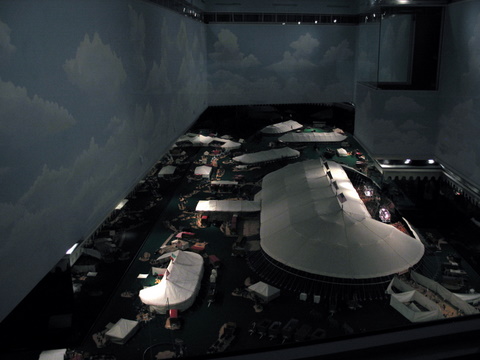 From the mini-circus building we headed to the Circus museum, which has a variety of circus artifacts, from costumes, to posters, to old circus wagons. Then we headed to the area of the estate that was of most interest to me – Ca d’Zan. Ca d’Zan is Phoenician for “House of John.” The home is amazingly extravagant and cost over $1.5 million to build in 1926. Amazingly, the Ringlings, who had no children, donated it to the state of Florida after their deaths. Here are a few pics of the house: 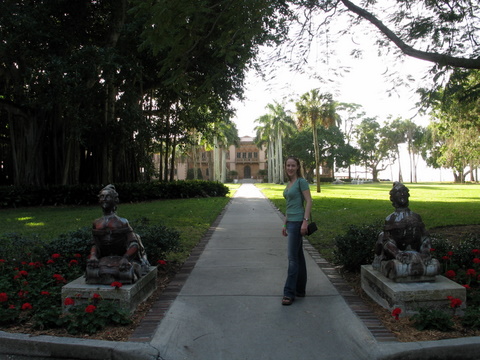 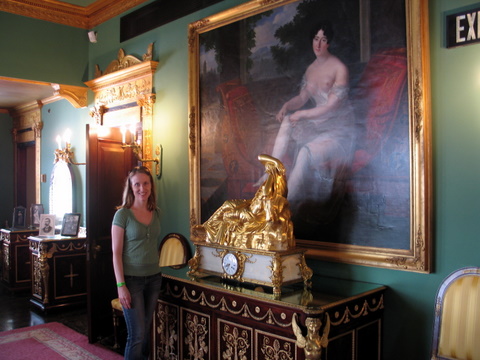 (Debi in John Ringling’s room; he liked nudes – and, let’s face it, who doesn’t?) 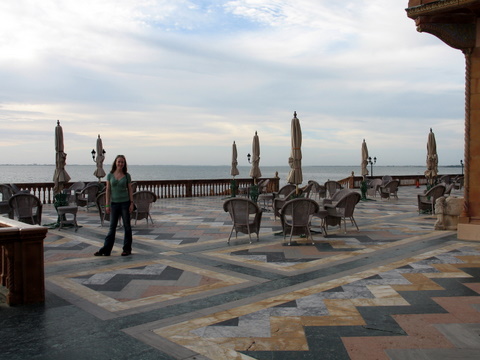 (Debi on the all marble terrace and dock; yep, a marble dock) 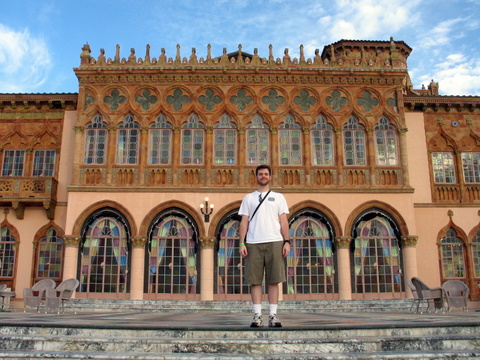 (Ryan standing on the marble terrace; this is the famous view of the house from the bay)

(this is my attempt at a panoramic photo of the rear of the house; click on it for full size)

After Ca d’Zan, we headed to the Ringling Art Museum via the Rose Garden. We usually like taking our time in rose gardens but were rushed. It was a very beautiful garden, but we didn’t really have the time to loiter and snap photos. As for the Art Museum, the structure itself is remarkable (see photo), but the paintings are unbelievable. I’m not an art aficionado and don’t know much about art, but the museum was very impressive nonetheless. I asked a docent during our rushed tour through the gallery how much the collection was worth. He laughed and said it was literally priceless. The museum wasn’t interested in selling any of the art, and when it can’t be sold, it really is priceless. Even so, they were offered $14 million for one painting, which they turned down. This museum alone is big enough that you could spend several hours in it. Here are a couple pics from inside: 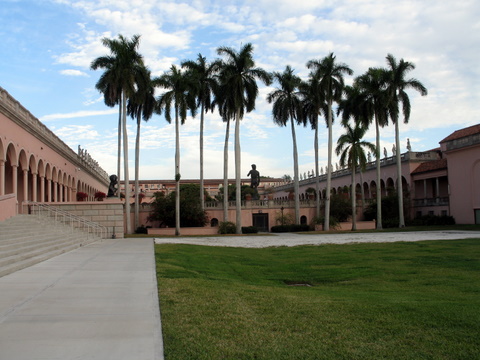 (the exterior of the Art Museum) 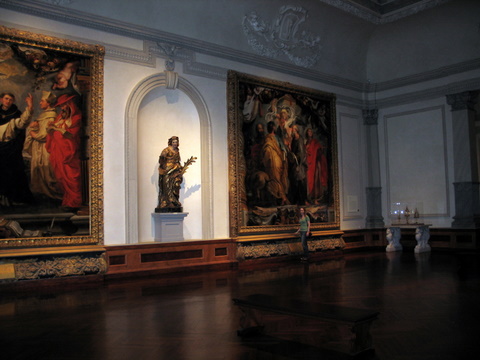 (Debi by one of the huge paintings) 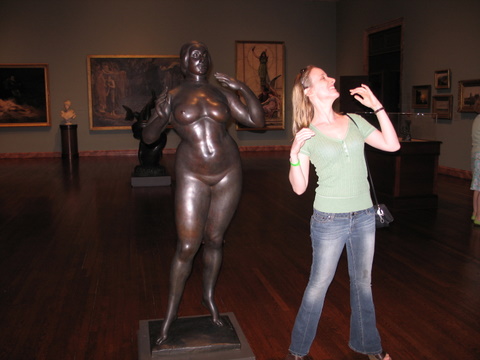 After the Art Museum, we headed back to our campsite for a night of roasting marshmallows by the fire. Stay tuned for wild boars and alligators…