I’ve been wanting to write this for a while but am just now getting around to it. When we moved to Cincinnati we bought a very modest condo in a working class condominium complex. We liked the area and even though we didn’t know most of our neighbors, we were mostly content. At least, that was true initially. Over time little things about the complex started to add up and turn into big things. One of the things that really got on our nerves over time was the fact that there was a manager of the complex who made a lot of money for basically doing nothing. I wouldn’t go so far as to describe my graduate school work experience as slave labor (20 to 25 hours per week at roughly $10k per year – though that doesn’t factor in my tuition), but I know I worked a lot more hours per week than the manager of our complex did and she made $18,000 per year. Here’s a scan of the yearly budget as evidence:

In addition to the purely gratuitous wages of the complex manager, there were a lot of other things that eventually really upset us. For instance, on the rare occasion that it snowed enough to be an issue with driving, the complex would plow the main parking areas, but not the back lots, which is where our assigned parking was. I shoveled most of our back lot twice while we lived there – spending almost the entire day each time. The complex also had the power to levy sudden, emergency fees whenever it felt like it and you had to pay them or else. This happened about three times while we were there, and we can only imagine the hardship it must have caused to some people in the complex who lived on fixed incomes. Finally, the complex had a pool and club house. The pool was a decent size, but a bit old and regularly needed repairs. Additionally, it was seldom used during the summer but cost thousands of dollars in upkeep. Given all of the financial problems of the complex, Debi suggested that they not open the pool one year to save money. This was met with a stunned silence and then an outcry, “How dare you suggest…” As for the club house, while it was supposed to be a common area, it was basically treated as an addition to the club manager’s condo. This was most evident in the fact that it was not smoke free (the complex manager smoked) and always smelled heavily of stale tobacco. To hold an event there you had to pay a fee, even if you lived in the complex. I never really understood that either.

Never having owned a condo before (nor really knowing many people who do), we were really disappointed with the whole experience. Maybe others have had better experiences living in condos, and I certainly hope that is true, but our experience soured us to owning a condo ever again… (Of course, with the housing market currently tanking, we’re beginning to wonder if we wouldn’t just be better off renting the rest of our lives.)

On a brighter note, we are now officially Floridians (okay, that’s probably only true in the technical sense – not sure when we’ll start feeling like we are “from” Florida): we have Florida Driver’s Licenses. We had to get them in order to get the strange “Homeowner’s Exemption” here in Florida (which is a tax break for people who actually live here year round). I was a little sad to see this beauty go: 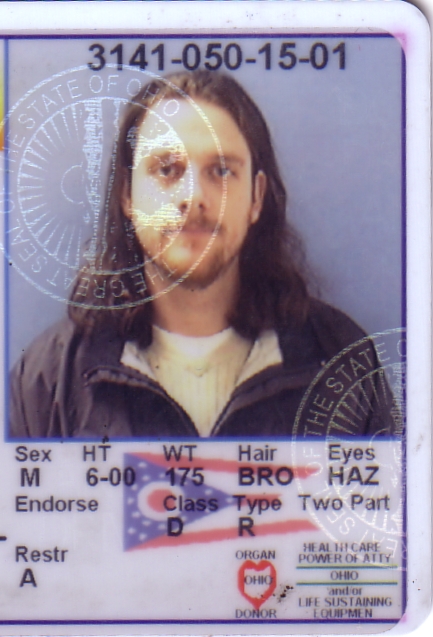 Also, we received a copy of a photo taken at our University’s holiday party. One of the perks, I guess, of working at a smaller university (that probably also has a little more free cash than most public universities) is that there is a yearly holiday party. It’s a rather posh affair with chocolate fountains, decadent food, live music, and even an open bar (which we will, unfortunately, never really take advantage of). Anyway, we liked our picture from the event: 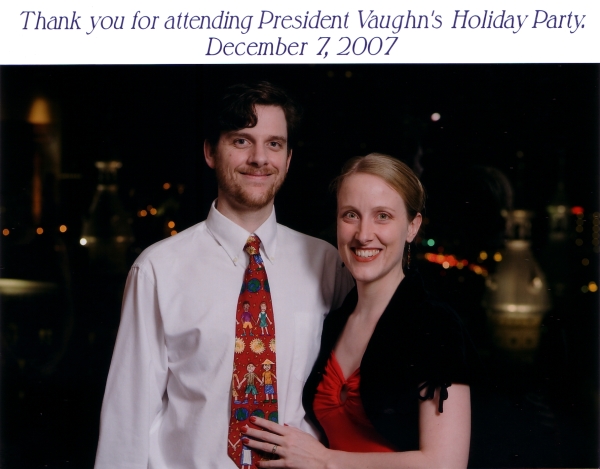 3 thoughts on “ever lived in a condo? (and other sundries)”