We tried to get an early start into NYCity, but sleep won the battle against sightseeing… So we ended up taking a later train from Princeton to Penn Station than we originally planned. From Penn Station we took the Subway down to the Staten Island Ferry, which is the poor man’s way of seeing the Statue of Liberty (it’s a free ferry). We rode the ferry across the bay and snapped a few pics: 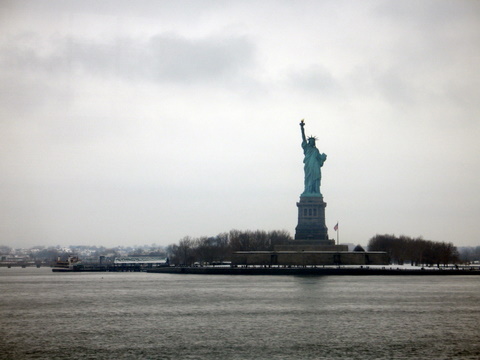 From there we headed into some of the ethnic neighborhoods. I had heard about some of these neighborhoods and thought they would be good places for a quick lunch (I dig authentic foods). We originally cruised Chinatown for a restaurant, but couldn’t find anything that looked good, and pretty soon were solicited by someone outside a tiny Italian place in Little Italy. We were pretty hungry by that time, so we allowed ourselves to be herded into the tiny, tiny seating area where we basically shared tables and chairs with every other tourist in New York on February 23rd. I get that NYCity is short on space, but I was really amazed at how many people they crammed into that restaurant. Even so, the food was good and it was a fun experience.

After lunch we headed to the American Museum of Natural History. We’re science geeks, what else are we going to do in NYC? It was about 2:30 at this point and the museum closes at 5:45, so we cruised through the exhibits. You could easily spend several days there and not have time to read everything they have on exhibit. It’s an impressive, enormous museum, but would probably be more fun with kids. And it also happens to be where I flipped someone – okay, something – off…

But first, a little background. On our first anniversary, Debi and I went to Vernal, UT. They have a dinosaur quarry out there and some petroglyphs, and since we’re total geeks, we thought it would be fun. It was fun, but it was also empty – no one goes to Vernal UT on New Year’s Eve. The emptiness of the museum in Vernal gave me an idea. The full-scale skeleton of a velociraptor looked menacing, but I know that my large human brain (with the help of other human brains) could outwit that nasty hunting machine. So, I flipped it off and Debi caught it on film: 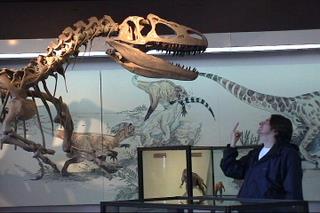 When I saw the velociraptor’s big brother on display at the Museum of Natural History, I couldn’t help myself: 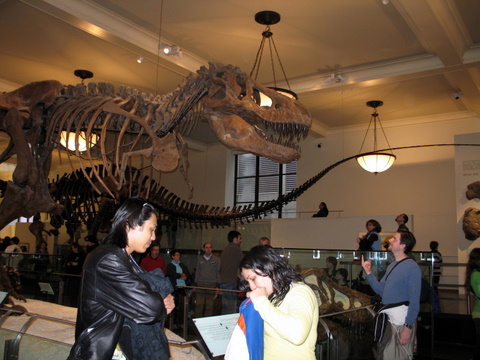 (For those who guessed an actual person, I’ll still buy you the drink. There’s no way you could have guessed a t-rex!)

From the museum we walked a couple blocks to around 71st street, outside the Dakota building so I could see where John Lennon was killed… (Rot Mark Chapman, rot, rot, rot!) We then traipsed around the Strawberry Fields of Central Park, but had no luck finding the monument as it was buried in the snow. Oh well, I have made my pilgrimage…

From there we walked the short distance to the Mormon temple in NYCity just to see it. We then headed to Times Square, again, just to see it. It was around 6:30 or so at this point and bitter cold. But guess who was hanging out in Times Square? Who else but the naked cowboy. Not much of a musician, but the Japanese girl we watched pay him to squeeze her ass for the camera didn’t really seem to care. From there we hiked over to Grand Central Station, again just so I could see it in my whirlwind one day tour of NYCity.

We were hungry again and opted for an Irish pub near Grand Central Station. It was actually really nice. It wasn’t packed and the servers were very nice (and very Irish). We wrapped up our dinner then booked it back to Penn Station (quite the hike that one) to catch the 9:04 express train back to Princeton Junction. It was a long and busy day, but entertaining to finally see all of the things I had heard about for so long.

A couple things stand out in my mind about NYCity. On our first trip on the subway I overheard conversations in at least four different languages – English, Spanish, French, and Russian. Only the French-speakers seemed to be tourists. I guess you know you’re in a true metropolis when people are just as likely to speak another language as they are to speak the primary language of the country. The number of people was also shocking. This really wasn’t that apparent most of the time as you get lost in the sea of buildings. But it really stood out at the Museum of Natural History. We were able to see pretty much whatever we wanted, but I’ve never been in a museum that is that filled with people. Every room we entered had to have had at least 30 to 150 people in it. Regardless of how obscure the exhibit, it was chuck full of people. I was also taken aback by the garbage. I guess I’m used to suburban living or something (even though I live very close to downtown Tampa), but the piles of garbage on the sidewalks was odd. People bagged their garbage or tied it up, but there were no recycling bins and no large plastic cans that can be hefted by automatic garbage trucks. Just piles and piles of trash, everywhere. Odd… Finally, the music in the subway. We walked past a couple of Asian men playing Oriental-sounding music on one of our subway rides and I was very, very impressed. I could have sworn it was a CD. Steve said he’d seen virtual concerts in the subways of New York… I guess when you have that many street performers to compete with, you have to be good.

I’m sure I could spend years living in NYCity (not that I’d want to) and not see everything there is to see there, but this was a fun trip.

Teaser for tomorrow: Name the school just outside Hartford, CT that has children so highly prized it has local police officers guarding the intersection just outside the school on Sunday nights? (Another drink on me if you guess right…)

—————-
Now playing: Simon & Garfunkel – A Poem On The Underground Wall
via FoxyTunes