My work trip started Sunday while Debi and Steve got to spend another day in NYCity. I picked up a rental around around 9:00 and headed to Demarest, NJ where I met with one of the researchers from the institute I was visiting for lunch. From there I headed to Hartford, CT. I checked into my hotel for the evening then drove to the house of the other researcher. We chatted over tea then he took me for a drive around Hartford. The drive included a quick jaunt through Farmington, CT, which is a remarkably old town (it was incorporated in 1645 – you read that correctly, 1645). It’s so old and posh that people post both the year their house was built and the house’s name (e.g., the Wolcott Estate) on the exterior of the house so people can see it.

Farmington also happens to be the location of Miss Porter’s School, a semi-famous (I say “semi” because I’d never heard of it) prep school for girls. It was Sunday night, around 6:00 pm when we drove past. There was a marked police cruiser in front of the school just watching the intersection. My host suggested that it was probably to protect the girls as they are the daughters of some of the wealthiest people in the world and kidnapping is a legitimate threat. Who knew? If you guessed Miss Porter’s School – you are way too preppy!

The researcher I was with then took me back to his place where we watched Argentinian soccer for a few minutes, during which he figuratively blew my mind. Ever wondered why there are often multiple soccer teams in a city or why soccer is so popular around the world but not in the U.S.? While it isn’t true of all soccer clubs, it turns out many of them were started by either religious or political rivals and the initial rivalries were quite intense. A good example of this is the Scottish teams The Rangers and The Celtics. I had no idea about any of this until this researcher pointed this out. I’d love to see clear delineations of political and religious affiliations of soccer clubs around the world, if anyone knows of one.

Anyway, he had me mesmerized by this for quite a while as we headed to dinner at a local Indian place in West Hartford. We ate and chatted late into the night…

Debi, on the other hand, spent the day in NYCity with Steve. I don’t know what all they did, but they did stop at Ground Zero long enough to snap a few pictures: 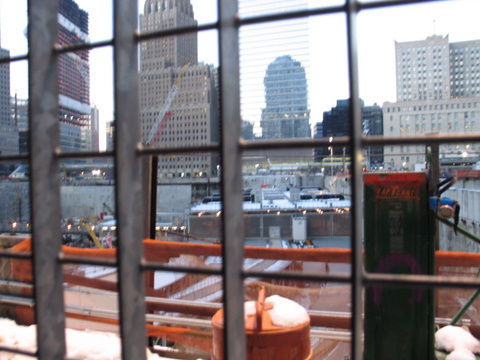 I did kind of want to see Ground Zero, but it’s basically just a construction site at this point, so I guess there isn’t much to see.

They also went to a Broadway show – Mama Mia – which Debi really liked. They ended up in the “biggest tourist trap ever” (Debi’s words, not mine): The Empire State Building. It costs about $20 to go up to the top, and, apparently, there are people hawking pop-up city maps all along the way (for like $12 a piece). She shot some pictures from up there as well, but they didn’t turn out so hot.

Teaser for tomorrow: Without looking it up, is Trinity College affiliated with a religion or non-sectarian? (No reward this time, you just get the benefit of being right.)

7 thoughts on “Hartford CT vs. another round in NYC”