The last couple of weeks of school were packed with grading and other activities. We are now finished with those responsibilities and have started our “summer of research” (some people get “summers of love” or “travel summers;” we get “research summers”!). We have enough research projects to keep us busy for two summers, but we’re going to do our best to get as much research done as possible.

But life isn’t all about doing research… Okay, the tenure clock is ticking, so it is all about doing research! 🙁 But all research and no play makes me… go… insane! So, I insisted that we schedule a few fun activities amidst the 12 hour research days (literally, we wrote them into our calendars). Yesterday was our first fun activity. We biked the Gandy Bridge that connects Tampa and St. Pete. The walkway/bike path is actually called Friendship Trail Bridge (sounds so inviting, doesn’t it?). The bridge is about 2.6 miles and is the old Gandy Bridge for vehicular traffic. It was converted from car traffic in 1999 and is now open only to walkers, runners, bicyclists, rollerbladers, skateboarders, etc. Having crossed the Gandy Bridge via car a number of times, I’ve seen the Friendship Trail Bridge and thought it would be fun to bike across it. I mapped out some of the key points in Google Maps. Here are a couple of helpful pictures. First, here’s the Gandy Bridge (the thin strip at the top is the Friendship Trail Bridge:

Here’s a close-up of the parking area:

And here area a few pictures of us there. First, here’s Debi on the west side of the bridge, advertising water bottles: 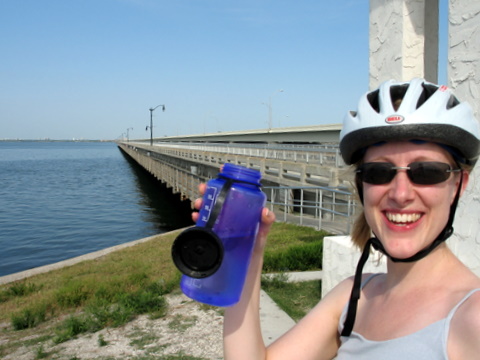 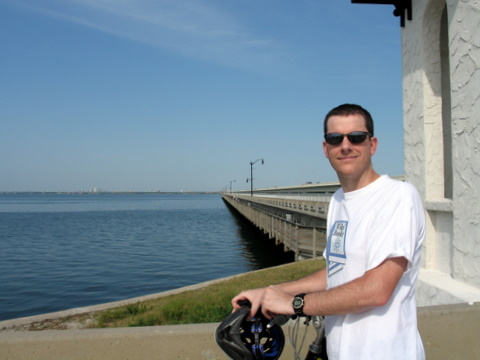 If you look close in the above picture you can see some buildings in the background; that’s downtown Tampa.

And here’s Debi on our way back over (headed east), 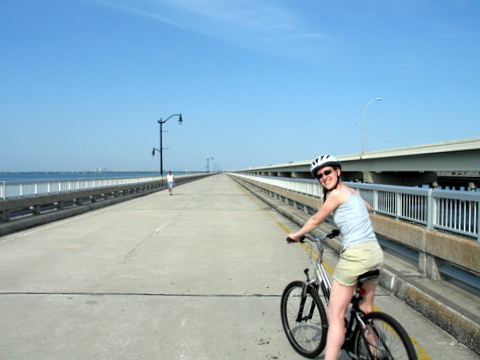 We were biking the trail for exercise, but we were also chatting about our research as we went and didn’t push ourselves. At our pace, it was about 20 minutes from one side to the other. The great thing about the bridge is that there is no concern of cars; your biggest concern is hitting other people. But the bridge was not busy at all and everyone there was friendly. There is one hill towards the east side where the bridge rises up to allow boats underneath, but otherwise it is flat and perfectly straight.

If you’re looking for a great place for a jog or to get a little exercise during a trip to Tampa/St. Pete, this is a very scenic place to do it.

Aside from our biking adventure (we’ve got another one penciled in for next Wednesday), two of my aunts (with their husbands) came to visit us this last Saturday. One aunt and uncle, Al and Norma Liston, were serving an LDS Mission on the LDS ranch in Florida (Deseret Ranch, of course). We kept talking about going over to visit them, but with how busy we were, we never did get over there. But, as loving relatives, they decided to come visit us. Another aunt and uncle, Helen and Ray Johnson, were in town to visit them and drive home with them. So, they came over to Tampa (the ranch is near the east coast of Florida) on Saturday, arriving at 1:00, just after our commencement finished. It was great to see them and spend the afternoon with them. We took them to Fort de Soto’s North Beach, the same place we took my dad when he came. We now have quite a collection of beach chairs, beach towels, and beach umbrellas (hint, hint) – enough for all six of us to sit comfortably in the shade and enjoy the beach while we caught up. We had a great time.

After the beach we headed to Rouen Thai for dinner. There was an unfortunate, relatively minor accident on the way into the restaurant (one of my aunt’s skinned her arm when she tripped on a parking block – I still feel bad about that as I almost caught her), but we had a great dinner (Rouen Thai is awesome and they were very accommodating). We then drove up Bayshore Boulevard and stopped at the University of Tampa to show them our campus, which is very beautiful. By that time it was getting late and they had to get back across Florida and home. Which leads me to my funny story…

My aunts and uncles are super nice and very knowledgeable in their respective areas of expertise (one is an electrician, the other builds homes). But they aren’t particularly tech savvy. They bought a brand new GPS unit for their trip home driving across the U.S. to Utah. It’s a Mio unit and it’s very nice. But, they weren’t exactly sure how to work it. They plugged it in and figured out how to put in an address and used it to get from their place, literally just miles from the east coast of Florida, to mine, just miles from the west coast. They called about 10 minutes before they arrived and told me that they were on Martin Luther King Blvd. and about 22nd street. That wouldn’t be unusual except I-4, the freeway that runs east/west from one coast to the other would have taken them right passed that area. It sounded to me like they got off the freeway early, but I didn’t really think much of it.

Having only been to Fort de Soto once, I wasn’t 100% positive of how to get there, but I was positive that we could take I-275 most of the way. So, I directed my uncle who was driving to get on I-275 then pulled out their GPS unit and plugged in the address for Fort de Soto. It took me a minute to get used to the new unit, but I figured it out and told it to plot us a course to the beach. Right away it told us to get off the freeway. That seemed really odd to me as I knew the fastest way to get there was on the freeway – my GPS unit (a Garmin) told me so last time. I figured maybe it was trying to route me a different way, but I wasn’t convinced, so I ignored the unit and told them where to go. Even so, I left the unit on and it continued to tell us to get off the freeway at every possible exit. After about 15 prompts to get off the freeway it dawned on me that maybe there was something wrong with the settings of the GPS. I started flipping through the screens and eventually found the setting that I was looking for. Apparently the Mio allows you to choose your method of travel: taxi, car, big rig… and walking! The default setting on their GPS was “pedestrian.” The reason it was telling us to get off the freeway was because pedestrians are not allowed on the freeway and it thought we were pedestrians. Apparently it’s pretty common for pedestrians to do 65 mph (come on, Mio, how hard can it be to figure out when someone is a pedestrian and when they are not?). I was glad I figured it out, but then it dawned on me what had happened earlier: My relatives had driven all the way across the state of Florida on back roads because their GPS thought they were pedestrians. That’s why they were not on the freeway when they called. I felt kind of bad telling them, but they were cool about it and we all had a good laugh!

2 thoughts on “biking the Gandy Bridge”