I caught the announcement that Barack Obama was visiting Tampa for a rally a few days ago via the local paper. So, Debi and I signed up for tickets and went today. We had already been to two rallies for candidates we’re not going to vote for (Mitt Romney and John McCain), so we figured we better go see the candidate we actually like.

The doors were supposed to open at 10:30. We wanted decent seats, so we got there around 9:30 only to find that the line to get into the St. Pete Times Forum literally wrapped all the way around the building: 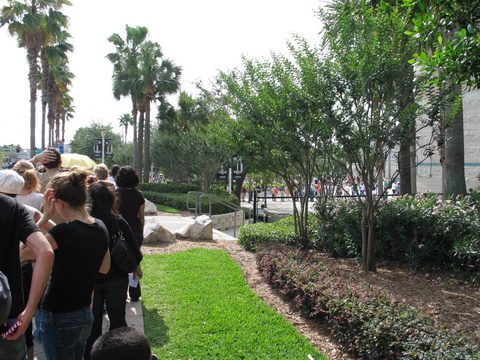 You can’t see it very well in this photo, but this is about 3/4 a mile from the entrance and they were already letting people in. The people you see in the distance are part of the line and they aren’t even close to the beginning. Debi, as always, was quick to point out the demographics (she beats me to it every time): It was close to 40% black; the rest were white or Hispanic. And, Obama supporters come in every shape and size: 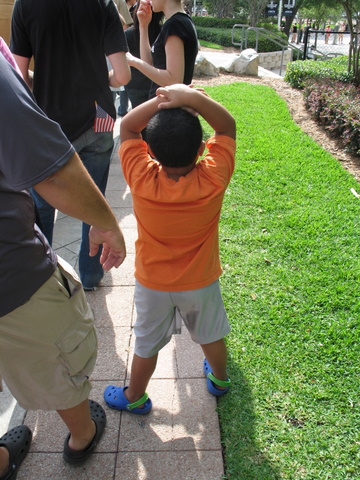 When we first arrived we thought we might not get in, but lines can be deceiving – we got in with plenty of space. In fact, we went against the recommended seating and sat all the way across the Forum, directly opposite the podium. When we arrived, no one was sitting there so we got front row seats. It was kind of far, but gave us a great view. (Note: The security personnel and volunteers were trying to position everyone behind the podium so the place looked full for the news media. Yes, Democrats do stage their rallies too. It wasn’t really necessary as the place filled up anyway, but so it goes.)

The news media probably worked against filling up the St. Pete Times Forum by claiming tickets were running out the day before, but the Forum was still pretty full by the time Obama arrived. The NYTimes article on the rally estimated around 15,000, which is what I estimated it at as well considering the upper level was mostly empty and the capacity of the Forum is 20,000. Here’s a panorama (click on it for full size) of the Forum about 30 minutes before Obama actually arrived. Tampa Mayer Pam Iorio, who endorsed Obama at the rally, was speaking at this point:

I snapped this shot zoomed in as close as I could with my camera (not a great zoom). You can barely see Senator Obama in the picture: 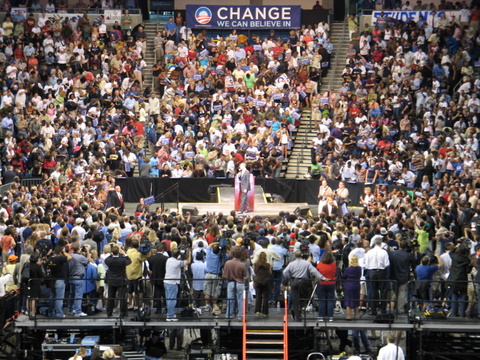 So, I went the easy way and snapped this one off the jumbotron: 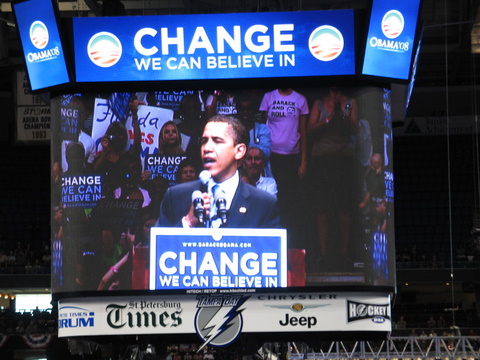 Having listened to Mitt Romney, and based on Debi’s report on McCain, Obama is a much more charismatic speaker. Maybe it helps that we agree with him on most issues – ending the war in Iraq, providing better healthcare (we actually think Hillari has a better plan here, but he at least wants to try), funding alternative energy research, etc. Whatever it is, the guy is likable and charismatic. What’s more, he spoke for over 30 minutes extemporaneously and kept our attention the whole time. (I’d love to see our current president try to wing it like that for 30 minutes…) It took up most of our day, but here’s to hoping we just saw the next president of the U.S.!