There’s a lot to like about working as a college professor, but one of the best perks is the flexible schedule, especially over the summer. We usually work every weekday, and usually most weekends, but sometimes we take a day off (or even a couple hours) to go explore our new surroundings. The flexible schedules we have make this particularly nice, as we can take off some time in the middle of the week rather than weekends, so we can go places that would be very busy on the weekend and find them almost empty during the week. At least, that was the logic in our decision to go bike Fort de Soto Wednesday afternoon. And, our logic was accurate – the place was nearly deserted.

On our two previous visits to Fort de Soto with family, we went straight to the North Beach (which is a remarkable beach) and didn’t check out the rest of the island. We did notice, though, that there is a great “recreation” trail along the main road. According to the official website, the trail is 6.8 miles long (according to Google Maps it’s closer to 5 miles (4.79 to be exact). Plus, it’s wide enough to ride at least two bikes abreast, which means we can chat while we ride. So, we took the bikes out yesterday and biked the entire trail. Here’s an aerial shot of Fort de Soto with the key landmarks indicated: 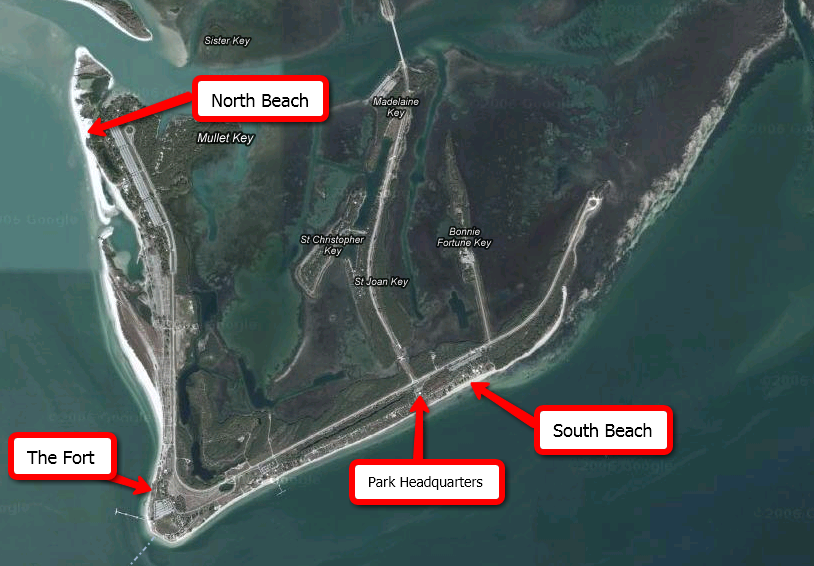 We arrived around 4:45 (it’s about 25 minutes from our house). We parked at the park headquarters, which is located right where the road comes in to the park. We hit the trail around 4:55, heading east first. We wandered through the East Beach on whatever trails we could follow on our bikes, then followed the trail to where it ends about 1/2 a mile past East Beach. Here’s Debi at East Beach (it’s handicap accessible, so we rode our bikes all the way out to the beach). In the background you can see the Sunshine Skyway Bridge: 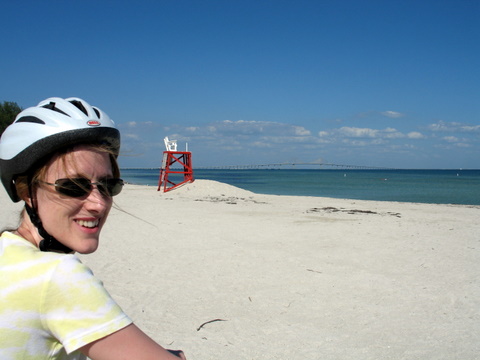 We did find a secluded section of South beach, which we returned to a little later (more below), but continued on. We followed the path to where it ends (better seen here), then turned around and retraced our path back to the park headquarters and continued on to the actual Fort, Fort de Soto.

Here’s Ryan at the turn around point: 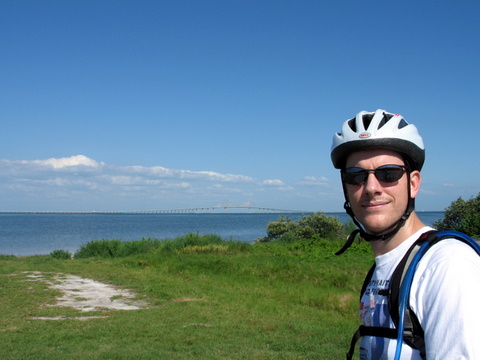 Again, the Sunshine Skyway Bridge is in the background.

There are a couple of piers off the island, one of which is the launching point of a ferry to Edgmont Key, which is another island just southwest of Fort de Soto. We stopped at Fort de Soto, which is pretty cool. You can walk through most of it in about 30 minutes, though a full tour of the original fort could take a couple hours as there are a lot of other building remnants away from the fort with information signs that would take a while to walk to and read about. We rode past most of them, then walked through the fort. Here’s Ryan in the fort: 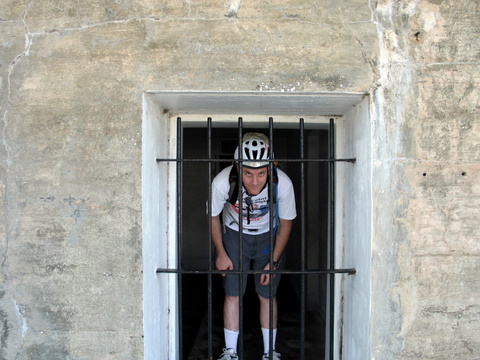 Here’s Debi getting up close and personal with one of the four 12 inch mortars. These guns are huge (some of the biggest ever made). 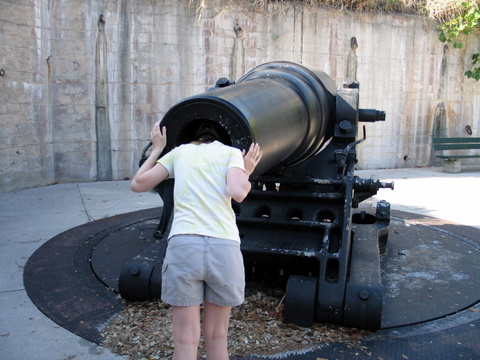 The fort is actually pretty smartly designed. The mortars are behind massive concrete walls, making them invisible from the sea. They could easily fire out (though they never were fired at enemies), but it would be hard to spot them. You can also walk on top of the fort, which is covered with foliage to hide the fort. Here’s Debi on top of the fort with one of the many gorgeous beaches in the background (that’s not even a named beach): 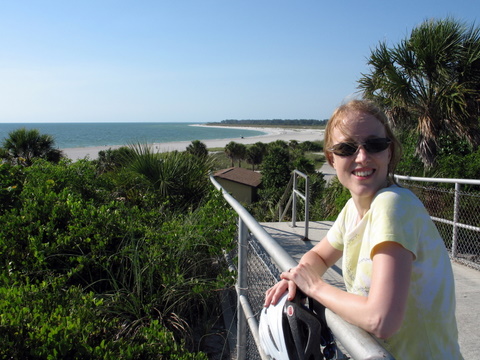 We continued our bike ride up to North Beach, but since we’ve been there a couple times we turned around and biked back to the park headquarters. The entire trip, with our side adventures, took about an hour and a half is all. We put the bikes back on the car then drove to East Beach and pulled out chairs and books to lounge by the beach for a bit. We originally tried our secluded spot pretty far down the beach, but the flies were pretty bad. So we moved back to the completely abandoned beach (literally, by 7:00 pm there was not a single person there), and read for a while. Here’s a shot to advertise for Florida: 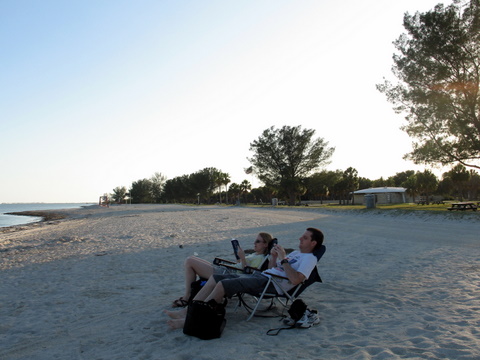 This is literally one of the nicest beaches in the US and we had it to ourselves. Yes, we’re lounging, but what you can’t see in the picture is what we’re reading: Debi’s reading a book on Biomedical Ethics for a book chapter we’re working on and Ryan is reading When Prophecy Fails by Leon Festinger on his handheld. The perfect way to end the day. Do you need any more motivation to come visit us?