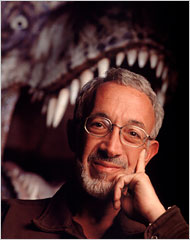 I found out this morning that my uncle, Stan Winston, passed away Sunday night. Stan was a favorite uncle in my family, not because he was rich or famous but almost despite his fame. Stan was always kind and considerate. Even while he was winning Oscars, he kept up with Cragun family happenings in rural Morgan, UT. He went out of his way to make time for his immediate family (he has two kids and four grandkids) and also his extended family, which was no small task considering the size of my family (I have 8 siblings). He and his family came to most of our weddings; the Winstons were a regular fixture in Utah when I was growing up.

Some of my fondest memories are spending Thanksgivings with the Winstons and my Nealey grandparents at their home in Ogden, UT. It was a tradition to go see a first-run movie on Thanksgiving, a fitting tradition given Stan’s line of work. I remember very clearly going to see my favorite movie of all time one of those nights: The Princess Bride at the domed theaters in Roy, UT in 1987. The movies were always more entertaining as a result of Stan’s humor and insightful criticism, something I didn’t really appreciate as a young, relatively naive boy growing up in rural Utah. Stan and his son, Matt, were side-splittingly funny, especially when they were together. It was impossible not to be entertained when the Winstons were around.

The Winstons were also gracious hosts. I remember my mom pointing out at my cousin Matt’s wedding the amazing ability of all of the Winston family to entertain people by getting people to talk about what was happening in their lives, which is all the more amazing considering the remarkable lives they led. Stan was also always willing to share his work with my family. Over the years I’ve been on at least half a dozen tours of Stan Winston Studios, many of them guided by Stan himself. He guided tours for my closest friends and even my in-laws and some of their friends. I’m sure he had very important meetings and phone calls he needed to take care of, but family was always right up near the top of his list of priorities.

Stan also gave me some of the best advice I’ve ever heard. During one visit to his studio, he asked me and my guests what we were planning to do with our lives. We weren’t sure at the time and said so. Then Stan offered the following (paraphrased from my memory of the event), “Hopefully you’ll be as lucky as I have been. But it’s not all about luck. If you want to be as happy in life as I have been, find what you are passionate about and do that. Then work isn’t work; it’s play.” He was right. For those of us lucky enough to have a choice in what we get to do, finding something we are passionate about and doing that turns our work into a pleasure. His advice directly influenced my decision to become a Sociologist, as I’m sure it has influenced countless other people to pursue their dreams.

The world may have lost an amazing, artistic genius Sunday with the loss of Stan Winston, but it also lost a favorite uncle, an amazing father, and a generous, loving, and kind person. We’ll all miss you, Stan…

(Note: His death was covered by the NYTimes and Slashdot, among thousands of other news sites.)

Addenda (I’ll be adding stories and thoughts as they come to me over the next few days):

I’m constantly amazed at how widely known Stan’s work was and how devoted his fans were. On my way to Costa Rica in early 1996 I sat next to a relatively nondescript individual. I stood out, of course, as a Mormon missionary and we struck up a conversation. As we talked on the overnight flight, it eventually came out that Stan Winston was my uncle. As soon as he heard that, he flipped, as though some how meeting me providing some metaphysical connection to Stan. He talked nonstop for at least 30 minutes about all of the movies my Uncle had worked on and how much he loved his work. He knew more about Stan’s work than anyone I had ever met (other than Stan, of course). We talked about Stan and his work for quite a while and then I surprised him with a gift. My parents in the Salt Lake City airport had just given me a hat with the Stan Winston Studio logo on it. I always loved getting merchandise from Stan’s Studios – they had the coolest artwork on them and were great conversation starters for “people in the know”. When I pulled out the hat, the guy’s heart rate must have doubled. As much as I wanted to keep the hat, I felt it would really make that guy’s day, so I gave it to him. I was reminded of this as I have followed the forums discussing Stan’s passing on some of the tech websites I follow. The devotion of some of his fans is really touching.

Here’s a great tribute video highlighting much of Stan’s work.