As I noted last week, my Uncle, Stan Winston, passed away. I had the opportunity to go to the funeral along with most of my siblings and in-laws. 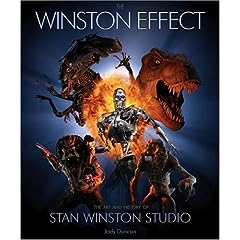 On the way out to the funeral I read a book about Stan Winston Studio called The Winston Effect. The book was published in 2006 and Stan sent all of the kids in my family a copy with a personal note in it. I skimmed through the book back then, but thought it a fitting time to read it in depth. It does a great job highlighting the many, many contributions Stan Winston Studio made to the fields of makeup, digital effects, puppetry, animatronics, and prosthetics. It also gives some of Stan’s personal history, which I was not completely familiar with. I’m really glad I read it as it helped me recognize some of the people at the funeral who worked with Stan for years and contributed to the studio’s success.

The Associated Press wrote up a nice summary of the funeral, which you can find here. Rather than repeat what they wrote or highlight all of the famous people who were there, I just want to touch on one point that really touched me. Many of those who spoke pointed out that despite his money and fame, Stan’s greatest treasure and most valued “possession” was his family. He talked about them to all of his professional colleagues and spent a great deal of time with them. This reinforced in my mind the human condition: We spend a great deal of time on pretenses – who is more popular, who has more money, etc. In the end, none of those things matter: we are all vulnerable animals.

But, and this is the part that moved me the most, we have the remarkable opportunity to share our lives with other vulnerable animals and experience something truly remarkable: deep, powerful connections with the people around us. While probably an artifact of our biological evolution, the power of those relationships is hard to deny.

My cousin, Matt, described Stan’s last day at the funeral. While it might seem voyeuristic, he explained that describing it perfectly illustrated and celebrated Stan’s life. I won’t go into all the details except to say that, at one point, Stan was in a hospitable bed with an oxygen mask on. He was barely able to breath, but as he looked as his wife, my Aunt Karen, Matt described Stan as “radiating love.” That’s powerful!

While in no way can Stan’s passing be described as a good thing, I have to admit that, from Matt’s description, his family made the most of a really difficult situation. It sounded, to me, like Stan’s final moments were how every person should exit this world: He was surrounded by family and friends who wanted only to express their love for him. Matt also noted what he described as a miracle: As Stan was passing, The Beatles’ song “Golden Slumbers” was playing in the background (Stan was a huge fan of The Beatles). If you know the song, you know that it is about the most perfect song to have playing at a time like that. A miracle, maybe not. But the perfect accompaniment for the loss of a loved one, absolutely!

We were in LA for several days and did a few other things while there (went to a restaurant that we first went to during our honeymoon, toured the USS Midway in San Diego, played cards with my family, visited Debi’s brother, sister-in-law, and nephew, and walked along the pier at Huntington Beach). Our last night there we stopped by 6522 Hollywood Blvd to see Stan’s Star. We forgot our camera and our phone batteries were dead, so we couldn’t take a picture, but I wanted to see it before I left LA as I don’t know when I’ll be back there. It was a nice culmination of a trip dedicated to the memory of my Uncle Stan.

All in all, it was a great trip to celebrate the life of a great person. Debi described it as the best funeral she’s ever been to. I couldn’t agree more. Even in passing away, Stan created powerful memories…