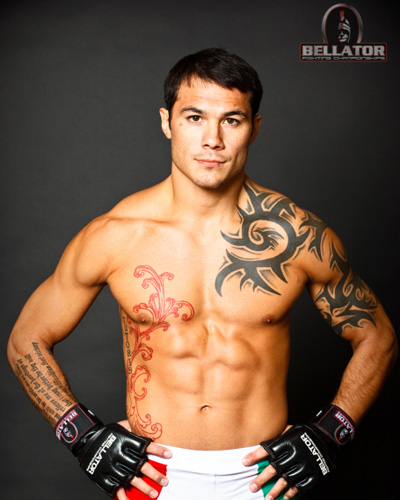 Most people probably don’t know this about me, but I’m a fan of Mixed Martial Arts (MMA).  I wouldn’t say I’m an over-the-top fan; I have yet to go to a live event (and probably won’t).  But I do watch the events I can and even read news about the UFC online.  So, after a couple years of following the UFC, the repeated exposure to fighters who are often very cut kind of got to me.  It’s not that I was super fat or even obese, but I had been wanting to loose 10 pounds just to get down to the weight I’ve wanted to be at for years.  Inspired by guys like Roger Huerta (the fighter in the photo to the right), I finally decided to just do it:  This summer I dropped the 10 pounds I’ve been wanting to drop for a couple of years.

So, because I was inspired by UFC fighters, I’m calling this the UFC Diet.  How did I do it?  I followed the tried and true “diet” formula: caloric intake = food eaten – activity.  Rather than increase my activity (it’s actually probably gone down over the summer), I just started eating less.  Less food = fewer calories = lower weight.

This isn’t revolutionary of course.  No quick fix.  In fact, it’s hard to feel hungry sometimes.  But it’s the price you pay for getting to a good weight.

Now, don’t get the wrong impression.  I don’t have the 8-pack of George St. Pierre (in the picture to the left).  I also can’t say the UFC did anything specifically to encourage me to do this.  But seeing fighters who are physically fit not for the sake of looking good but because they need to be at a physical peak to fight at their best is inspiring.

(Postscript: Hopefully lawyers from the UFC won’t show up here and make me take this down over copyright infringement, etc..  I’m not claiming to represent the UFC or anything of that sort.  But, if lawyers from the UFC do show up, I’m not above discussing a book deal turning my idea/experience into a book.  Hint, hint.)