This was our last day at Lake Powell.  Traditionally we get up and basically just pack up and leave.  Not having learned from the previous day, I decided to go skiing again.  This time it was Mark, Kristen, Corbin, Jake, and Carson.  Mark and Kristen skiied first, then I went.  I got up fine, but my arms were burning and I was really too weak to be skiing.  I lost control at one point but muscled through it.  In the process, I screwed something up in my back.  I’m hoping it’s just a pulled muscle and not something more permanent like a herniated disc, but, as I write this nearly a week later, my back is still killing me.  I can barely pick anything up.  Poor me – I hurt myself skiing. 🙁

Anyway, I gave my camera to Jake, who snapped this shot: 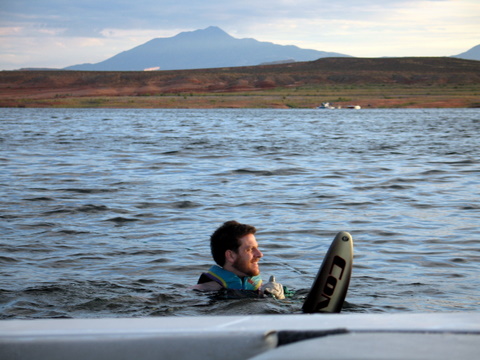 He didn’t get any of me skiing, but I did get one of him skiing: 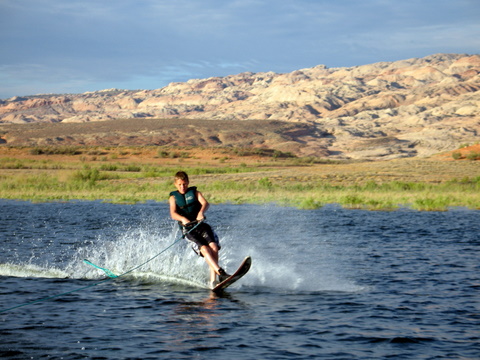 He’s 14 and slalom skiing.  Pretty groovy.  We also got Carson up on two skis and Carter, who I think is 5, rode the kneeboard.

We were a little late getting back, but then went right to work pulling up the anchors and ropes and getting eveything on to the boat.  I then took a crew of nieces and nephews on one of the ski boats to let them ski while the houseboat headed up the channel to gas up, unload, and get everything ready.  We finally wrapped everything up around 1 or 1:30 and got on the road home.  We made it back to Salt Lake around 6:30.

Lake Powell is always fun, even though you never really feel quite clean as showering generally consists of lathering up your hair and jumping into the water.  It was also far more tiring this year.  I felt like I could use a week just to recover from the vacation (not to mention my back is still screwed up).  The day after we got back, Debi developed a rash that we think is from swimming in contaminated water at Lake Powell – a risk you always run.  The rash is almost gone, now, but it was kind of disturbing when it first developed.  Overall, a lot of fun.

We basically took Sunday off.  I built my mother-in-law a new computer (which was sorely needed) and caught up on the news.  We then headed up to Morgan to help my dad and sister with computer issues.  Then came back to Taylorsville to get ready for our next trip.