Here are the other two interviews I did that landed me on local TV.

The first is from the day of the raid – May 20th.  I happened to have students coming over for dinner that night (from a small May class I taught).  A reporter from Fox 13 stopped by before my students did and asked me if I’d walk down the street around 9:00 and do an interview that would air at 10:00.  Since my students were still around, they walked down with me and got to watch to the interview from the Fox 13 news van:

This second video is from a few days later (May 24th). A different news program, NewsChannel 8, contacted me for an interview. I did this one in our backyard:

I mention something in this video only briefly that I didn’t mention in the others – an assault I witnessed. This was also mentioned in the St. Petersburg Times article. Here’s the long version of that encounter:

The day before the raid (May 19th), Leonora LaPeter Anton, the reporter from The St. Petersburg Times, and Stephen J. Coddington, a photographer for The St. Petersburg Times, came over.  I’d already spoken with Leonora at length about the clinic, but she wanted to talk some more and check the place out.  She and Stephen arrived around 4:00.  We chatted for a bit, then walked around my neighbor’s house and into the alley behind my house where I showed them the rear door to the Tampa Bay Wellness Centre, when it was behind my house.  I walked them around the front so they could see the front as well.  We then walked down the street about a block to the new location, 2137 W Martin Luther King Jr. Blvd.  It was about 4:45 or so at this point, and the clinic was still humming with activity.  There were probably 75 to 100 people waiting around in the parking lot for their prescriptions.  Leonora, Stephen, and I stood out front on the sidewalk, talking, taking notes, and taking pictures.  Leonora approached one person who looked like he worked there, but he basically wouldn’t say anything.  Several people stared at us, including one young guy who was probably in his early to mid-twenties.  He was standing directly in front of the building (we were a little to the west of it at this point).  He was wearing a baggy yellow outfit and looked like a gang banger.  He had a solid gold grill.  I’ve generally tried to be nice to the people at the clinic, but this guy looked and acted like a thug.  Ergo, he is the “yellow-shirt thug.”

One of the things we were doing while standing there was noticing license plates.  At least 70% of the cars were from out of state, and we were wondering just how far out of state they were.  So, when we saw one from far away (e.g., Nebraska), we’d mention it.  Stephen thought he saw a unique license place, so he stepped off the sidewalk toward the fence surrounding the parking area to get a better look.  As soon as he did, yellow-shirt thug came running at him/us.  He started cursing and yelling at us, “Get the f*ck out of here!  What are you trying to do?  Ruin people’s lives by putting them on the news?”  (etc. etc.).  He got right up into our faces and feinted several times as though he was going to attack us.  I noted for him that we had no obligation to leave that spot as we were on a sidewalk, which is public property.  He said he didn’t care.  He then threatened Stephen by saying, “If you take another f*cking picture I’ll smash your camera.”  I told him he’d go to jail for that.  He said a few more choice words, postured a bit more, then walked away.

After we calmed down a bit, we decided we’d cross the street to see if we could talk to the owners of the pharmacy and daycare that were directly across MLK from the pain clinic.  We crossed over to the pharmacy, David’s Pharmacy, and eventually got the owner’s wife to talk to us.  The people at the pharmacy were very nice and we ended up talking to them at length (they were mentioned in the St. Petersburg Times article).

Just as we were finishing up the interview with the pharmacy owners, we started to notice something weird was going on.  Yellow-shirt thug, and a similarly dressed green-shirted thug, were slinking around the west side of the daycare headed north, toward the pain clinic.  You can see everything in this map: 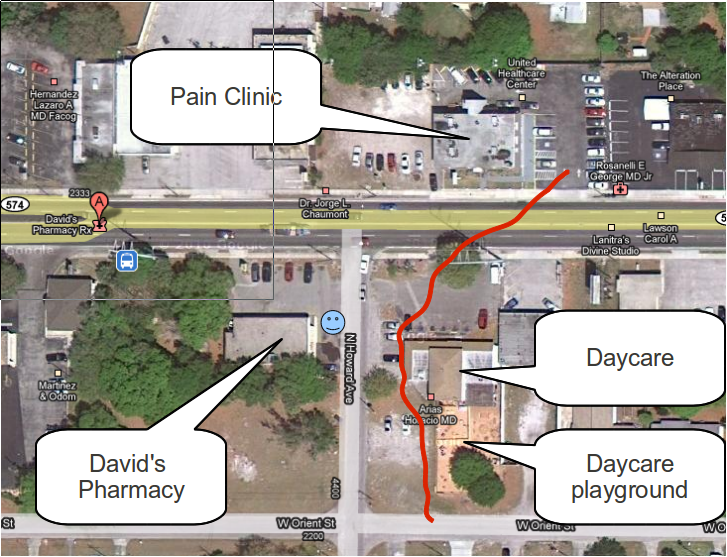 Leonora, Stephen and I were standing were you see the blue smiley face.  We were looking east (to the right of the photo) and watched yellow- and green-shirt thugs slink along the red line, from behind the daycare (past the fenced in play area), along the side of the daycare on the daycare’s property, across MLK and into the pain clinic parking lot.  I saw them slink past and thought it was weird, but didn’t really pay much attention to it as we were still talking to the owner of the pharmacy.  It was about 5:30 at this point and the daycare’s parking lot was full of parents picking up their children.  The traffic along MLK was also crazy busy.

A couple minutes after the two thugs headed north across MLK, we then saw yellow- and green-shirt thugs come running with an elderly guy chasing them right back along the red path.  The elderly guy was carrying four large pieces of concrete in his hands and had blood dripping from his mouth and down his chin.  The two thugs ran right along the red path and disappeared behind the daycare.  At this point, chaos was breaking out at the daycare.  A parent, holding his young daughter, saw a marked police car in the traffic on MLK and flagged it down.  It pulled into the parking lot and two non-uniformed police officers jumped out and chased down the elderly guy, forcing him to drop the rocks and pinning his arms behind his back.  The owner of the daycare was out of the daycare at this point trying to figure out what was going on.

Once all this came out, the police called an ambulance for the elderly guy, who left in it to have his jaw repaired.  Unfortunately, the thugs got away.  Argh!

Anyway, that’s the long version of the story.  Great place to have in your neighborhood, huh?!?  This is precisely why I’ve been saying I’m ecstatic to see the place gone.  Most of the “patients” at the clinic weren’t really in need of pain medication.  They were addicts or dealers getting drugs.   Good riddance!