Now that Toren is walking everywhere (when he does; he has wanted to be held a lot lately, probably because he’s been sick), he is more subject to injuries from falls.  After our most recent photoshoot (pictures coming soon), he grabbed the tripod, then tripped in the grass.  He sliced his cheek on the tripod on the way down, resulting in this:

I called him scarface for a few days as a result.

A couple days after this, he fell at daycare and gave himself a nice cut and bruise on his left eyebrow.  Poor guy – welcome to the world of the walking…

Speaking of which, while I’m not new at walking, you’d think I am as I have my own injury to report.  I’ve been playing soccer with some people at the University of Tampa a couple times a week.  It’s fun and good exercise, even though right now the heat is basically unbearable.  This last Monday I collided pretty good with another player and very well may have cracked a rib.  It knocked the wind out of me, which I’ve had happen before, but I’ve had pain since then – basically just when I bend awkwardly or try to lift things (like Toren).  It could just be a nasty bruise, but the symptoms are those of a cracked rib as well.  I haven’t bothered to have it checked out as the treatment for a bruised ribcage and a cracked rib are the same – take it easy and let it heal for about 6 weeks.  So, I’m hoping that will work.

Just so you can get a taste of the weather in Florida at the moment, here’s a graph of the temperature over the last week (about 95 degrees everyday): 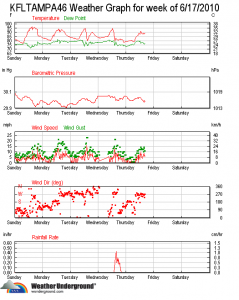 Unfortunately, it doesn’t include the humidity – 95%, all day, every day.  Try playing soccer in that!