Because we’re workaholics yet want to spend time with Toren, we’ve worked out our weekends so Debi has Toren in the morning until 1:00 while I work and then I have him from 1:00 until he’s ready to go to bed around 8:00.  That’s usually when I take him hiking or biking.  To add a third option to the mix, we bought a 1 year family pass to the local zoo, the Lowry Park Zoo.  Lucky for us (though also intentional), it’s less than 10 minutes from our house and parking is free.  The pass was $125.00 for Debi, Toren, and me (though, technically Toren would be free as he’s under 2).  Regular adult admission is $20.00 per visit.  So, one of us has to go 7 times for the pass to pay for itself.  I’ve been three times and Debi’s been once, so we’re more than halfway there.  Also, they say no outside food, but Toren NEEDS snacks and drinks, so his diaper bag usually contains a soda for me and snacks, as well as his drink and snacks.

I actually bought the pass without having taken Toren in, but figured he’d like it because he loves looking at stuff, particularly animals.  I was right.  He loves it.  He gets to be outside, see groovy animals, and even play in the water fountains they have there, which he was afraid of the first time, but now doesn’t want to leave.

Here’s a photo of Toren playing on one of the toys by the water fountains: 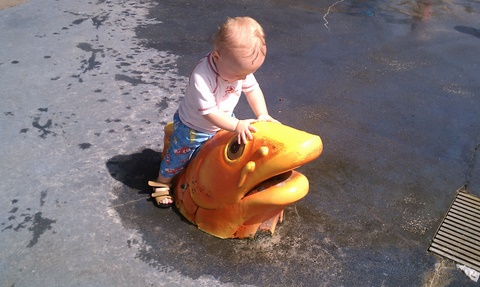 And here’s how Toren plays in the fountains: