This was our second full day in Venice, and while we didn’t technically have as much planned as the previous day, because of the gorgeous weather, it seems like we got to see a lot more of the city.

We started the day with a 9:30 am visit to the Doge’s Palace.  The Doge was the big cheese during the Venetian Republic, though he couldn’t, technically, make any real decisions without the approval of the senate.  His palace doubled as the center of government that included an aristocratic democracy and various committees and judges.  The Palace itself is pretty remarkable.  Again, we weren’t allowed to take pictures inside, so I didn’t, but you can see some great pictures of some of the rooms (which are enormous considering when they were built) here.  Here’s a shot of Debi, Steve, and Rosemary in front of the Palace:

And here’s a shot of St. Mark’s Campanile and the Piazza San Marco from the corner of the Doge’s Palace:

I did sneak one shot while in the Palace.  From the Palace you can cross the Bridge of Sighs I mentioned in my post yesterday.  It’s the bridge to the prison.  I guess you could say it was convenient to have a bridge directly from the court where prisoners were sentenced to their jail where they served their time.  But, admittedly, the view would make you sigh.  Here’s Toren checking it out with Debi:

The photo is washed out as I took it on my cellphone.  I was trying to be discreet because we weren’t supposed to take photos.

I also filmed this clip of Toren climbing the stairs in the Doge’s Palace:

He wasn’t interested in the amazing artwork or architecture, but he did enjoy climbing the marble stairs.

We spent a good couple of hours at the Palace, then we walked up to Campo San Bartolomeo, which is in the heart of the various shopping districts and close to the outdoor market (which is on the other side of the Rialto Bridge) for lunch.  We had lunch at a restaurant right in the Campo, then split up.  Brent, Ethan, and Gary went back to the condo to take a nap.  Rosemary and Suzy went shopping.  And Steve, Debi, Toren and I went on an adventure.  Our goal: Cross all four Grand Canal bridges (Rialto, Accademia, Calatrava, Scalzi) in a single day and take pictures on as many bridges as we could.  Here’s a rough sense of our plan (and what we did, but Google Maps won’t go over the Calatrava Bridge walking for some reason):

This is actually much easier than we thought, as Venice is quite small.  The hardest part is just figuring out where you’re going.  Anyway, here are a bunch of photos of us on different bridges:

From the Rialto Bridge we walked through the outdoor market and then got lost in Venezia Sestiere San Polo working our way toward the Scalzi Bridge.

We stopped for gelato at one point since, well, you can never get enough Italian gelato. Here are Steve and Debi ordering their gelato:

We eventually made it to the Scalzi Bridge. It was nice just wandering around and not worrying about having to be anywhere.

After crossing the Calatrava Bridge, we paused to change Toren’s diaper (on the side of a canal, of course):

We then stopped for a bit to let Toren run around in a plaza.  He wasn’t interested in the gondolas gliding past, or the other boats, or even the water for that matter.  He was interested in the pine needles that had fallen off the pine tree in the middle of the plaza.  And he was adorably cute as he walked around, so I did an impromptu photo shoot of him in Venice: 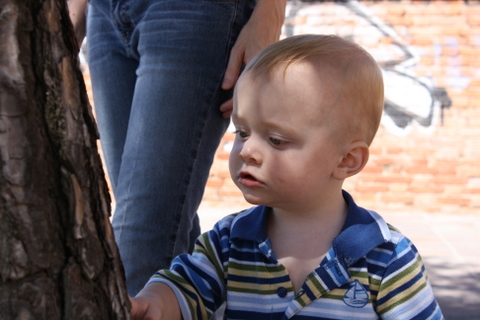 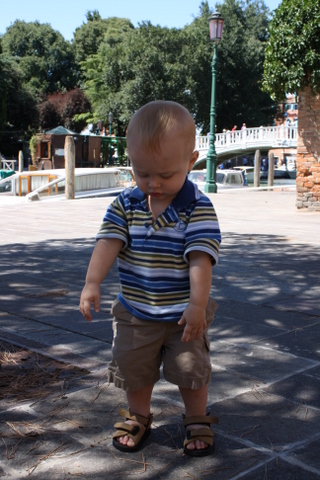 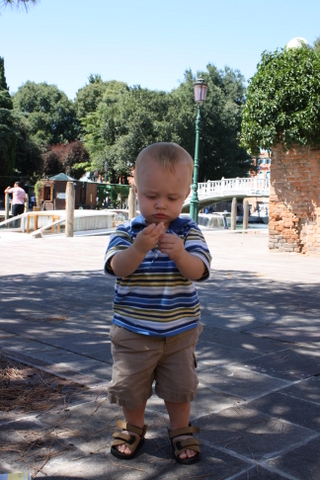 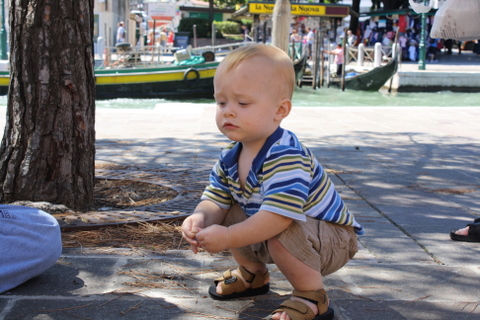 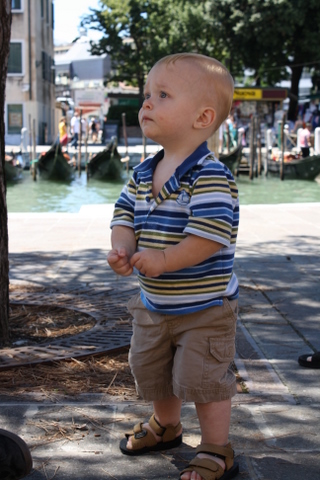 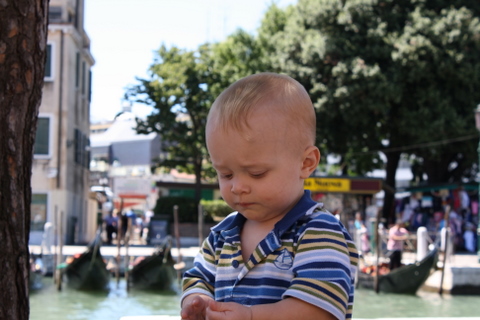 Note all the gondolas lined up in the background. 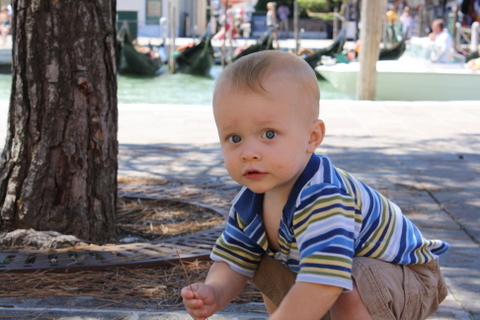 I snapped a couple of Debi as well: 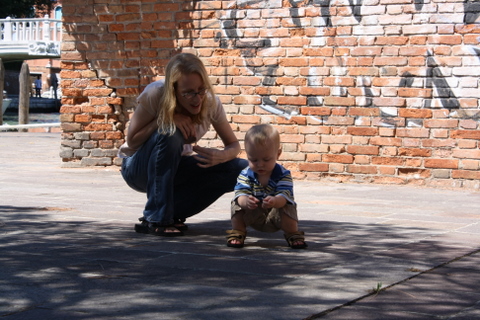 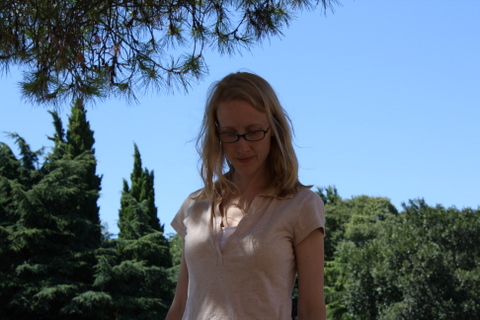 And here’s some footage of Toren running around the plaza:

After Toren’s break in the plaza, we continued our trek back toward the Accademia Bridge, crossing more small bridges along the way:

It took us a while, but we eventually made our way to the Accademia Bridge:

While wandering around in the south west region of Venice, we realized it isn’t as busy as the area near Piazza San Marco and, amazingly, it’s less expensive.  We even scouted out a restaurant for our last night in Venice.  If you have free time in Venice, definitely check out areas further away from Piazza San Marco; they are calmer, which is nice given the bustle around the Piazza.

We made it back to the condo around 3:30, just in time to take a break before we headed out for a gondola ride.  Of course, when you’re in Venice you have to go on a gondola ride, even though it’s something of a racket (80 euros for 40 minutes – crazy!).  But I’m glad we did, not only because I can say that I’ve been in a Venetian gondola, but because it’s actually quite relaxing and calming once you leave the Grand Canal and head down the side canals (we went down Rio de San Maria Zobenigo).  It’s calm and quiet and very peaceful.  We snapped a few pictures of the gondola ride as well, of course:

After the gondola ride, we crossed over the Accademia Bridge and had dinner at a nice little restaurant, Restaurant de Traviso, with a covered patio.  It was the best and cheapest food we had in Venice.  They were also very accomodating of our kids, which was good because Toren and Ethan were all over the place.  This is a great place for a quiet dinner away from the crowds.

After dinner, Brent, Suzy, Ethan, Rosemary, and Debi went to a fashion show in Piazza San Marco and Steve, Gary, Toren and I got gelato in the campo right by our condo and hung out.  Every place we visited there were people hawking small trinkets.  One of these guys was hawking bouncing balls that light up when you bounce them in the plaza.  He was slick.  While Toren was running around, he grabbed one of his balls, bounced it so it lit up, then handed it to Toren.  You would have thought Toren won the lottery.  I couldn’t pry it away from him without him putting up a serious fight and crying.  So I ended up buying it.  I’m not usually one for buying toys spontaneously, so I was bit perturbed, but watching Toren play with the ball was pretty darn cute.  In fact, lots of people in the campo thought he was cute, so it was probably worth it.

We did have a minor issue at the end of the night.  Debi said she’d be home at 10:00 pm, which is about when Toren was going to sleep at this point.  Toren was clearly tired by 9:45, but Debi has been nursing him to sleep and well, that’s something I can’t do.  So, come 10:00 pm, when Debi hadn’t returned from the fashion show, Toren started to cry… Then scream…  He wanted his mom and his milk.  The sippy cup with milk and cuddling I tried just didn’t cut it.  He wore himself out crying and screaming by 10:30 and fell asleep.  Debi got home at 10:35.  That was a bit perturbing, but otherwise it was a good night.