I don’t normally give advice, but sometimes I can’t help myself…

Debi finally wrapped things up at her job in Cincinnati and is now down here with me. She had a bit more than half of our stuff still with her in Cincinnati. It is scheduled to arrive today. Once that gets here, our move will be pretty much complete. We’re trying to adjust to life in Florida, but it’s not easy. I think our move to Cincinnati from Salt Lake was easier, as the climate was more similar. Florida is, well, Florida. This is a tropical climate and the forecast and weather reflect that. Yesterday was the first day we didn’t have torrential downpours in about a week. I just checked the forecast and it actually looks like partly cloudy skies for the next few days, which is shocking consider what the forecast is usually like down here – 40% to 60% chance of thunderstorms every day, from June through October. It rained a lot more in Ohio than Utah (my desert home land), but Ohio is like a drop in the bucket compared to Florida. And the heat… Well, it’s hot, very, very hot! But we’re adjusting. I hate to say it, but we’re already looking forward to the part of Florida that people find most appealing – mild winters 😉

Another treat of Florida – ANTS! I’ve never really had a problem with ants in any home I’ve ever lived in (we had a brief scare in Ohio, but it lasted all of about 2 days). Not so down here. Just after I moved in I started noticing these tiny, tiny bugs crawling around all over the place. I’m no entomologist, so I first thought they might be termites, which began to scare me. But once I called a pest control company and they sent someone out to check, I was “relieved” to find that they were “just ants.” The tiny ones were, in fact, pharaoh or ghost ants (the picture in the link is my own).

The “just ants” turned into a terrible foe pretty quickly. As we stocked up on food those tiny ants began their attack. They swarmed whatever was somewhat accessible in our cupboards. They first went after my vegetarian bullion, which was wrapped in foil and cardboard. They ate a lot of it before I noticed them, but it was too late – the bullion was a bust. Then they went for some of our cereal – they ate right through the plastic and were swarming in that cupboard going after an entire box of cereal. This all happened before I knew for sure what kind of ant they were, so I did what any uninformed, concerned home owner would do – I bought some Raid insect fogger and unleashed a wave of smoky insect death in the house. It killed thousands of them, but… That stuff basically is worthless in the end. All it kills is the ants you can see, not the queen and the nest.

Once I learned that, I started reading up on ants and how to get rid of them. Turns out, the only real solution, and this is what pest control people use too, is bait. I’d never even heard of ant bait (remember, I’d never dealt with this), but a quick primer on it and I was ready to attack. Basically, ant bait is either a gel or powder/granule that seems very appetizing to ants but actually contains a slow acting poison. The ants pick it up, take it back to their nest, and it gets spread around to the queen and larvae, which all end up dying, along with the workers. It’s the only way to kill ants for good, as killing workers doesn’t wipe out the nest and can even split nests, making your job harder.

A quick trip to Home Depot and I was prepared to wage all out war against these home invaders (or so I thought). I picked up several products, but it turns out products are only good for one or two kinds of ant. The one that worked the best against the pharaoh ants was Maxforce Ant Killer Bait Gel, which comes in a syringe. As soon as I squirted a little of that stuff in their path, they went to town on it and, well, started their slow march toward death. The only problem with the gel is that it dries out, resulting in a hardened resin-like substance after a few hours. One of the other baits I picked up was less attractive to the pharaoh ants, but was still successful and didn’t suffer from the same hardening problem. It is also gel-like, but comes in little plastic “hotels” that have some bait inside (it’s called Real-Kill ant bait). I bought a bunch of those, saw them do some minor damage, and decided I’d leave them out for the long term just in case the ants decide to come back.

I picked up one other bait at Home Depot that was supposed to be for ants outside, but it wasn’t very effective – Grant’s Kills Ants stakes. While dealing with the pharaoh ant infestation, I also noticed some other ants in the yard. We had a few building ant mounds and one kind of ant that was climbing up our exterior wall and entering our attic. I fought a pitched battle against the one entering the attic and seemed to have some success spraying them with regular pesticide and caulking their entry holes, but once I learned about ant bait, I realized I’d have to do more than that.

When the expert terminator came over, I asked him about those two types of ants as well. The mound builders are fire ants; the ones crawling into the house are carpenter ants. I tried the gel and my other baits on both of them, and neither seemed effective. The terminator recommended Advance carpenter ant bait and Extinguish Plus for the fire ants. I think my continual battle with the carpenter ants turned them away from the house, so I haven’t seen them and haven’t found their nest, so I haven’t been able to test the Advance bait.

The fire ants, on the other hand, once it was dry enough to apply the bait, I did, and they went to town on it. (That’s another important thing the expert mentioned – you don’t want to apply bait when it’s wet – it will just waste it. Apparently ants are discriminant in what they eat – they don’t like soggy bait (unless it’s a gel), so you have to put stuff out when it won’t get wet. Also, you don’t want to cover their hole with it, but put it around the outside. If you cover their hole, they think they are being attacked and will hide. Put it around the hole, they find it, scavenge it, and eat it.) The fire ants seemed to love the bait. I know they’ve eaten a bunch of it, but the question still remains – did it kill them. When I checked last night, they were still munching on it (and rounding it up), but were also still alive. I’m going to go check again this morning to see if I’m just feeding them or also poisoning them. Anyway, I think I’ve finally made some headway with these buggers.

And so begin our adventures in Florida…

Once you open it up they continue the charade of making it seem like this might still be from my mortgage provider: 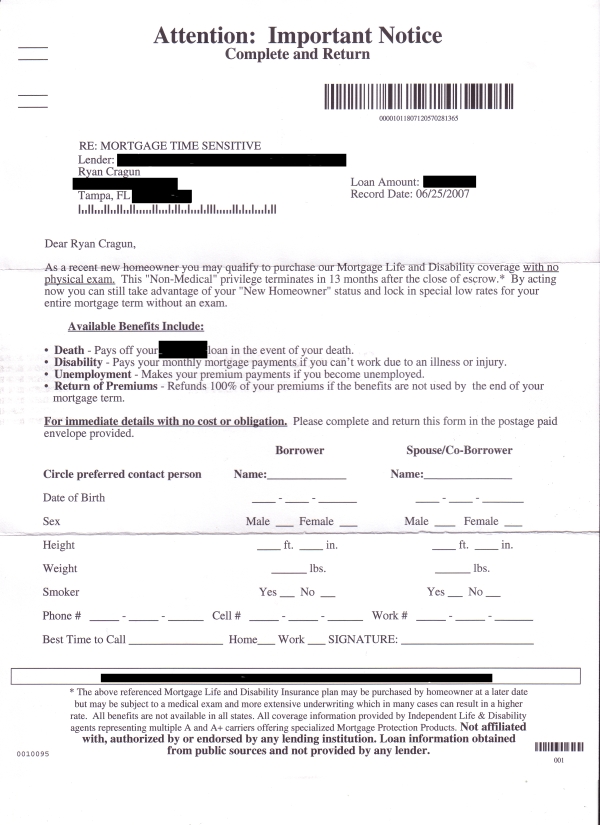 Of course it’s not from my mortgage provider and clearly this is lucrative enough for about 40 different companies from all over the US to send me the same damn mailing. If so, that must mean it’s absolutely not worth it! I’m just wondering how many more are going to come…

I’ve received a bunch of other crap, but this next one is the only other one that has really bothered me. They, too, use scare tactics to make it seem like I desperately need what they have to sell. Little do they know that I know that tap water quality is extremely highly monitored and regulated. In fact, with few exceptions, tap water is cleaner and safer than bottled water. Bastards:

A family member recently sent me an email encouraging me to try a new fuel additive that claims to boost fuel economy. Because I care about this relative and care about the truth, I spent a few minutes checking out the claims of this company to see if it is really worth my time. Here’s what I wrote back:

I took your claims seriously and did a little sleuthing to see what I could find out about this fuel additive – Ultimate ME2. Here’s what I found:

So, what am I saying? There is no reason to believe any of the claims of EYI, the company that makes Ultimate ME2. They don’t explain how their product works and the little data they do provide (which is of questionable origin) doesn’t actually support their claims. Your better off buying the least expensive gas you can find and making sure you: (1) check your tire pressure, (2) have clean air filters, (3) change your oil regularly, (4) don’t drive fast, (5) and get as much weight out of your vehicle as possible. Fuel additives are a scam, pure and simple. Sorry, but they are.

Update 2008-07-12: Here’s a recent article from the St. Petersburg Times giving the same advice I have given here.

An excellent article in the NYTimes this morning provided a bunch of links and information on how to opt out of all sorts of solicitations: