A couple years ago I brought you the holy grail of lids (a lid for tin cans).  Now I bring you the holy grail of pitchers.  Right around the time we got married, Debi and I bought a pitcher that seemed well-suited for mixing orange juice, the Rubbermaid Mixing Pitcher, Blessed be the Holy Pitcher.  Little did we realize then that what we had purchased was the world’s best pitcher.  Okay, that may seem a bit hyperbolic, but let me explain why I believe this is the world’s best pitcher.  First, you can obviously use it to mix juices without making a mess.  And, the mixer is built into the pitcher, so you don’t have to dirty a different kitchen tool.  Second, because the entire mixing/lid mechanism comes off the top, it makes cleaning the pitcher a cinch.  You can throw both pieces in the dishwasher and they both come out clean with virtually no effort on your part.  Third, they are sturdy (the one we bought when we got married is still running strong after nearly 9 years of very frequent use).  The sturdiness also means the lid doesn’t come off during pouring.  But, in addition to all of the amazing features of the Rubbermaid Mixing Pitcher, blessings be upon it, the competition sucks.

Tupperware Heathen Pitcher, curses be upon it

Since we purchased our first Rubbermaid Mixing Pitcher, Blessed be the Holy Pitcher, we have bought several additional pitchers.  We figured the Rubbermaid Mixing Pitcher, Blessed be the Holy Pitcher, was ideal for orange juice, which settles after awhile.  But we figured other pitchers would be better for big batches of lemonade or grape juice, also frequent juices one might find around our house.  Oh how wrong I was.  All of the other pitchers, curses be upon them, had so many flaws that I’m ashamed we put up with those other pitchers for years.  Take, for instance, the Tupperware Heathen Pitcher, curses be upon it.  While a classic and widely worshiped pitcher, the lid is prone to coming loose at inopportune times, releasing a flood of ice and juice when it goes.  This pitcher consistently lets its followers down.  We owned one of these for a while but decided the risk wasn’t worth it.  A pitcher that does not offer the existential rewards we expect in a pitcher is not worthy of our admiration. 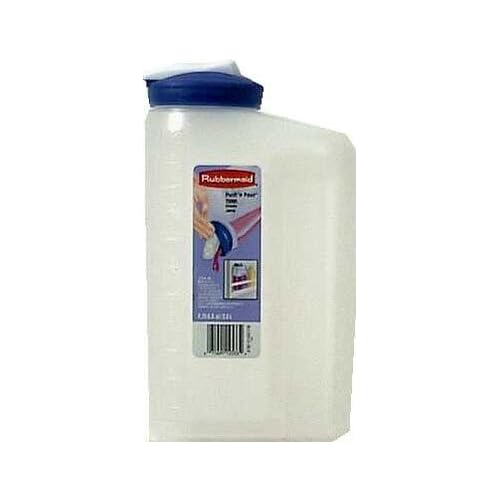 Rubbermaid Satanic Pitcher, curses be upon it

The pitcher that has been the bane of our existence for the last several years is the Rubbermaid Satanic Pitcher, curses be upon it.  The person who designed this worthless pitcher apparently never had to wash one of these out.  The opening is too small for an adult man’s hand to fit inside (though a small woman’s hand will fit).  It also doesn’t allow for easy dishwasher cleaning because of the opening.  Thus, what ends up happening is crap gets washed inside the pitcher during the wash cycle then lodges in the bottom corners.  And because you cannot reach inside to clean it out, you end up with a disgusting pitcher.  This pitcher made us unhappy, which is what always happens when you allow the influence of unholy pitchers, curses be upon them, in your home.

We also have a really nice pitcher – crystal nonetheless – that we received for our wedding, nearly 9 years ago.  We now consider this a sacred version of the Rubbermaid Mixing Pitcher, blessings be upon it, only for use when we are hosting worthy guests.  (Guess how many times we’ve used it?  Zero!  It’s not that our guests are necessarily unworthy, we just never remember it exists; we have not been good followers of the holy pitcher.)  Thus, we treat our sacred version of the one true pitcher in the store-it-in-a-cupboard-and-forget-about-it-forever fashion.  Only those worthy to see the sacred version of the one true pitcher will have that honor (if we remember it exists).

6 thoughts on “the holy grail of pitchers”