Debi and I went to a professional football game yesterday – Tampa Bay Buccaneers vs. New Orleans Saints. In fact, we even had $250/seat tickets for club seating. Here are a couple pics (from my crappy cellphone camera) as evidence:

Here’s Debi at the game: 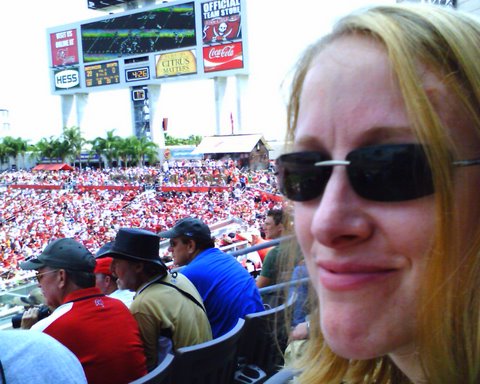 Here’s a shot of the famed pirate ship: 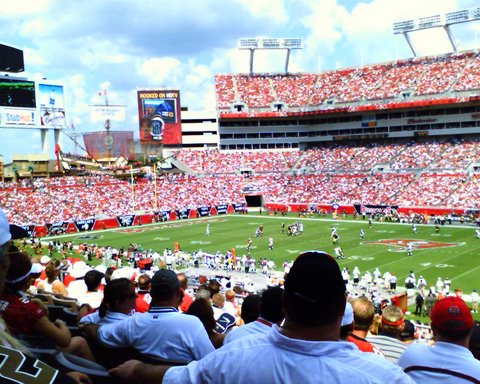 And here’s a shot of the action on the field: 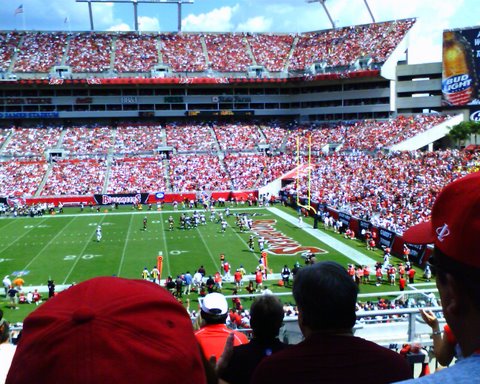 So, you must be asking yourself at this point, how did Ryan and Debi, two people who follow American Football about as close as most people follow developments in penile implants, end up in $250 seats at the first home game of the NFL season for the Buccaneers? One of my (Ryan’s) colleagues at the University of Tampa entered a raffle for four expensive tickets to the game to benefit the athletic department. He won and invited us to go along with him and another friend of his. Long story short, someone gave us tickets and, since we always said we should go to a professional sports game at some point, we went.

It was actually kind of fun. We learned quite a bit about the whole enterprise. First off, the sheer number of people who can fit into that stadium is amazing – 65,000 (or 75,000 if expanded). People also take NFL football very seriously here in Tampa. According to one of the people we attended with, all of the seats in the stadium are season tickets, meaning every game is sold out well in advance. Additionally, tailgating starts hours before the game and thousands turn out for it. All this got me to thinking – we had decent seats, but definitely not the best seats in the stadium, and our tickets were worth $250 a piece (I’m not kidding; it almost made us sick when we thought about how much they cost). If you assume that the average ticket costs $200, and every game is sold out, that’s $13 million per game in tickets alone. Add to that concessions and merchandise ($4 per bottle of water) and each game probably brings in close to $20 million just from the fans in attendance. (Add to that merchandising, advertising, TV contracts, etc. and you’re probably talking somewhere closer to $30 million per game).

Perhaps the most interesting thing about the cost of attending a game is the ramifications ticket prices have for racial and ethnic diversity. A recent glance at the U.S. Census Bureau’s website indicated that the city of Tampa is 25.3% black and 24% Hispanic. I saw more black cheerleaders (3 out of 36) than I did black fans in the stands (okay, that’s a slight exaggeration; I saw a group of 6 or so New Orleans fans who were black, but that’s about it). There were also very few Hispanics. This is an intriguing side effect of exorbitant ticket costs – it prices out racial and ethnic minorities.

One final comment – cheerleaders! One of the people with whom we attended said that the cheerleaders were all volunteers. I found that hard to believe considering how “professional” they looked and performed, so I did a little sleuthing online. According to this wikipedia page, NFL cheerleaders work “part-time”, though it is more like a full-time job. That would seem to indicate they get paid for their work, which would only make sense considering the time commitment – at least 4 or 5 hours actually performing every week, in addition to a number of hours practicing and lots of touring. Even so, they really don’t make much money directly from the team (see here). They can earn quite a bit from making appearances. And, of course there are the side deals for merchandising, as most NFL cheerleading squads have calendars as well. So, while I don’t have solid evidence that NFL cheerleaders are making big bucks, I’m pretty confident they do get paid.

Overall, the game was entertaining. We had good company and, even though it was a blow out, it was an upset blow out and the fans really got into the game. The only drawback was how hot it was. Just sitting there we were all sweating profusely (close to 91 degrees and 90% humidity). Otherwise, it would have been very entertaining. Probably not $500 worth of entertaining, but $20, easily (which is what we spent on concessions just to keep from becoming dehydrated). Would I do it again? If I had another set of free tickets and couldn’t sell them on EBay, yeah, probably.