We spent the weekend in Portland, OR, attending a conference called: Challenging Assumptions: Religious Faith, Genetic Science, and Human Dignity. It was an intriguing conference. There were probably 50 to 75 people who attended at some point. This was both nice and awkward. It was nice because we couldn’t help but get a chance to meet some of the more notable attendees (e.g., Dean Hamer, Joseph Graves, Jr., Ted Peters), but it also meant we only had about 4 people attend our paper presentation. Overall, the experience was definitely worth the trip. (Ask me some time about Dean Hamer’s thoughts on his recent book, The God Gene – funny story. Also, for future reference, Ted Peters said in his presentation, “I don’t think there is a future in therapeutic cloning.” Just a note for when therapeutic cloning takes off.

We arrived Friday around mid-day and checked into our hotel (Hotel Deluxe) then headed to a local vegan restaurant, Blossoming Lotus, for lunch. We then stopped by a coffee shop to do some work (i.e., prepare our presentation for the next day). The conference started later that night, at around 7:00 pm. Saturday we spent the entire day in the conference, attending presentations and giving our own. The conference technically ended Sunday morning with a breakfast with the authors, but we had too many other things to do and ended up missing it.

Given we were flying across the country, our flights were very odd. Our flight to Portland got us there very early, but our flight home left at 11:35pm and we flew overnight to Tampa (not fun). That left us with most of the day Sunday to explore Portland. We rented a car and headed up the Columbia River Valley, stopping at Multnomah Falls and the Bonneville Dam along the way to Hood River, where we stopped for lunch at an inexpensive pizza place – Pietro’s (I had hoped to stop at a nice place, but it only opened for dinner). From Hood River we headed south and looped around Mount Hood, which is a truly amazing mountain. We then headed back to Portland, stopping at the Rose Garden before heading to an awesome vegan restaurant for dinner – Nutshell (no website, but a must for vegetarians visiting Portland).

Here are a couple pics from the trip: 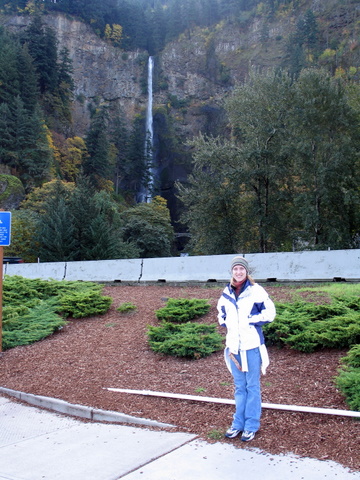 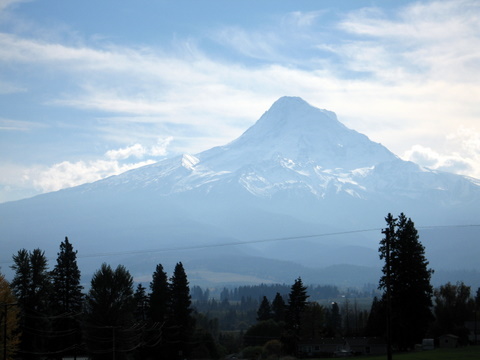 Debi at the Rose Garden 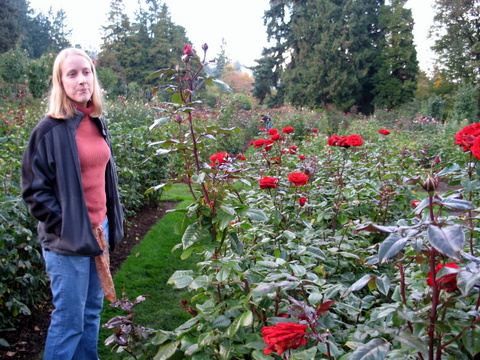 I had to teach all day the Monday we returned. Our flight got in around 10:15 and I had class at 11:30. We drove, literally, straight from the airport to campus where I brushed my teeth, combed my hair, then headed to class. I basically collapsed when I got home Monday night. Flying over night is never fun; following that up with classes all day is a nightmare.

In other news – I got the “bright” idea a couple weeks ago while making a scrumptious butternut squash soup to, instead of discarding the seeds, let the seeds dry up then plant them to see if we can raise some squash of our own. We went out and bought a few clay pots and some planting soil and planted a few of the seeds (we have tons of seeds from just the one squash). It only took about 5 days before we had sprouts. Now we’re trying to figure out what to do with them as our little pots aren’t going to be able to hold full squashes. We’ll see if we can keep these alive until they actually produce some squash – it’s kind of a fun experiment.