I left off yesterday’s story with Debi and I sleeping on the roof of the houseboat under the canopy hoping the rain wouldn’t be a problem.  As you’ve probably guessed by me telling this story, the rain didn’t ease up.  It got worse, much worse.  We were situated to protect us from the rain from one direction, but it switched in the middle of the night.  The rain poured in from the other direction and even started leaking through the canopy.  Around midnight the water was seeping into our bags.  Around 3:00 am our bags were so wet Debi woke me up and said she’d had enough.  We crawled carefully downstairs and looked around for a place to sleep, but with the grand kids sleeping everywhere and their parents and grandparents (my siblings and parents) in their respective beds, we couldn’t find anything but the hallway, which is a bad idea with 20+ people getting up in the middle of the night to use the bathrooms.  We finally found a location: underneath the kitchen table.  But we didn’t want to wake anyone up, so we weaved our way in-between the chairs and tried to get as comfortable as possible.  It worked enough for us to sleep another couple of hours, but it certainly wasn’t pleasant.  Here are a couple of photos illustrating why we went downstairs.

Tammy and Don are still asleep in this photo.  They were directly under the center of the canopy and built themselves a wall to protect themselves from the rain from one direction.  They still got a little wet, but not too bad. 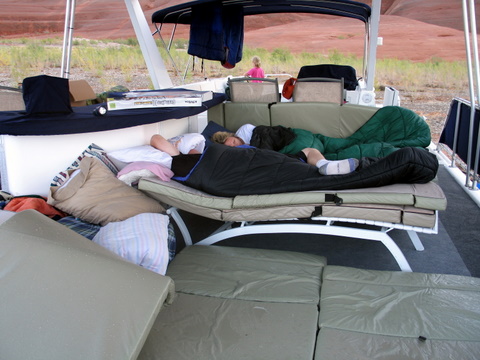 We were on the two pads perpendicular to Tammy and Don.  This next picture shows just a little of the water we slept in: 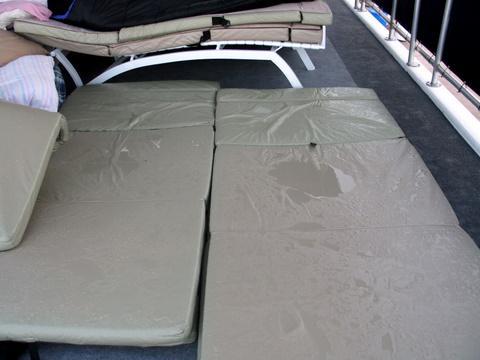 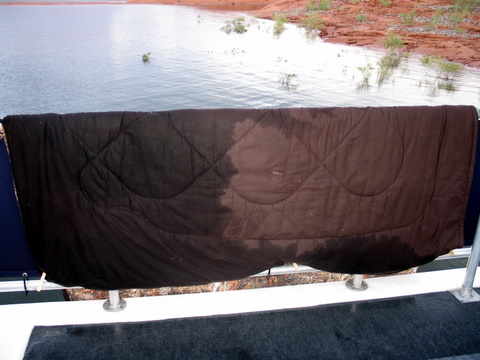 We were wet.  Here’s why we slept under the kitchen table: 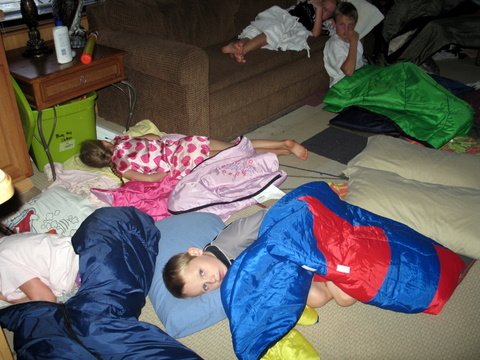 The kids were laid out all over, leaving us this spot: 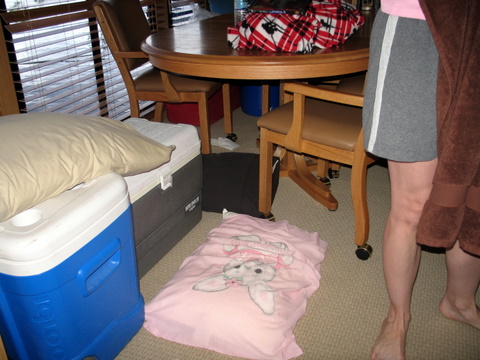 Debi slept under these two chairs.

One night under the table convinced us it was time to set up a tent on shore to make sure we didn’t have to do that again.  We set up a tent my parents brought, or at least we tried.  Some of the poles were missing, so, with the help of my Dad, we jury-rigged some poles and got a tent set up.  It worked, at least for a couple of nights (more foreshadowing…).

We also went hiking, snapping a few photos from the cliffs and hills above the houseboat.  Here’s Debi over-looking the canyon where we spent the week.  The houseboat is just to her left: 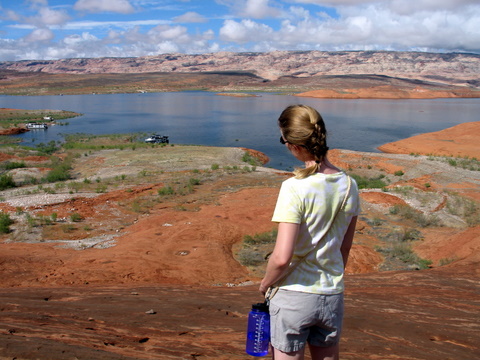 This was also our day to cook lunch.  We made hummus and cucumber sandwiches, which were generally well-received, though some of the kids didn’t dig them very much.

After lunch, we decided to have science hour with Ryan and Debi.  We tried hard to think of active science stuff that my nieces and nephews would find interesting.  We ultimately decided on studying ants.  I remembered my friend Tom mentioning that he and his brothers would go gather different ant species when they visited his relatives in rural Wyoming and put them into bowls together to watch them fight it out.  We figured we could teach them about ants – how much weight they can carry, how they developed trails to food, how they communicate, etc. – and then let them watch some ants tear each other apart when we were done.  We figured that would keep them entertained.  So, we took the kids up the beach and found three different ant species.  We dropped some food to let them build trails then scooped some up and took them back to the boat.  We put them together and watched to see what would happen.  As it turns out, not much.  There were some minor skirmishes, but it wasn’t the all out ant massacre we expected.  Then one of the kids suggested we drop a lizard in with the ants to see what would happen.  I’d like to say it was true scientific interest, but I think it was more an interest in carnage.  Two of the nephews caught a lizard and dropped it in.  Given the huge size differential, we were all thinking the lizard would stomp the ants to pieces.  Nope.  The ants teamed up and went to town on the lizard.  Debi couldn’t stand torturing the lizard, so we let everything out after about 30 seconds.  For our first foray into Ant Wars, it was definitely entertaining.  We also talked about different kinds of rocks; McKenzie and Carson, two of the grandkids, studied rocks this past year in school, so they did pretty well classifying them.

We swam a bit and for our evening entertainment played a few games.  I forget the first one, but I suggested one game – two truths and a lie.  A lot of people had very good truths and lies, and many were revealing.  Here are mine:

Any guesses as to which is the lie?

Again, feel free to guess which is the lie.

After the two truths and a lie game, Danny, one of my older brothers, taught us a game he played in college.  Basically you bring people into a room one at a time and have them kneel under a blanket.  You then tell them, “You are in a desert and can remove one thing on you that will help you cool down.  We (those outside the blanket) know which item you need to remove that will help you cool down.  You need to remove that item and hand it to us.  When you hand it to us, we’ll let you know if it is the correct item.”  We played the game using the older nieces and nephews and most of them figured out pretty quickly that the correct item is the blanket (a few handed out their shirts first).  Then Danny put his 2 year-old under the blanket and told him to take something off (all he was wearing was his diaper).  Hilariously, Connor took off his diaper and smiled and laughed when he handed it out to Danny.  It was awesome!

After the night activities wrapped up, we headed out to our franken-tent.  We spent about 20 minutes wondering if someone was messing with us as we heard a lot of sounds that sounded like there was someone outside the tent.  Turns out it was just our franken-tent rubbing against itself.  Once we realized it, we finally got a good night of sleep.