On the second day of our trip to Southern Utah we got up fairly early and headed out from St. George to Zion National Park, which is about 45 minutes away.  Debi’s parents had been to the park about 35 years earlier, but neither Debi or I had ever been.  I wasn’t sure what to expect, but was very impressed in the end.

The park has a shuttle system that moves people through the park and even into Springdale, the city just outside the park.  There are a bunch of stops and you can do a variety of things from each stop, including sightseeing, snacking, and hiking.  The shuttles cut down on congestion and are very convenient, though they were pretty busy.  We left the main parking area on our first shuttle and stopped at the Human History Museum.  The Human History Museum is a pretty small museum with a bit of information on the history of Zion as regards humans.  It talks briefly about Native Americans then goes into the history of European settlers, most of whom were Mormons.  There is also a 20 minute video that highlights many of the main features of the museum and recaps some of what the museum says.  From the Human History Museum we took theshuttle to the Court of Patriarchs.  Here’s a map showing the major stops and the attractions in the park: 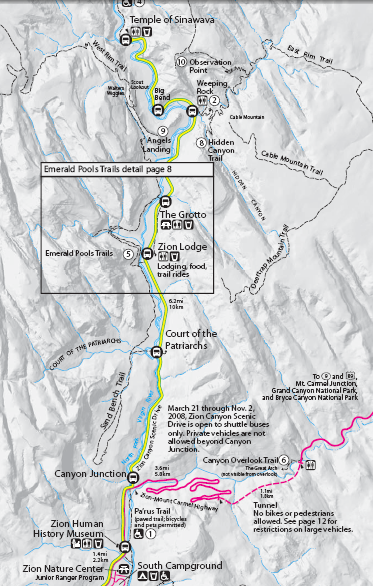 More information and a more detailed map are available here.

Here’s a shot of Debi at the Court of the Patriarchs: 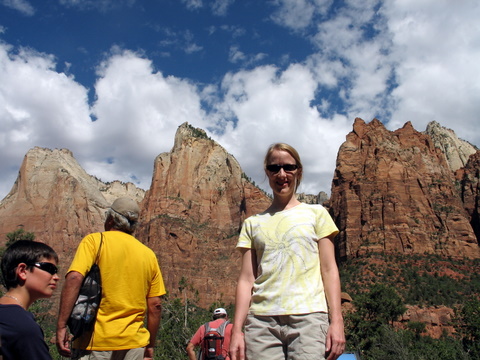 It’s called the Court of the Patriarchs because the three mountains you see are named after three Biblical patriarchs: from left – Abraham, Isaac, and Jacob.  It’s a very short hike up to this vista point.

From the Court of the Patriarchs we took the shuttle up to Weeping Rock, which is a bit longer of a hike, but not bad at all.  Weeping Rock is a cool sandstone cliff that sits atop shale.  Water that seeps down into the sandstone eventually hits the shale layer, which it can’t penetrate, then runs laterally until it drops out the side of the cliff.  This particular cliff has a nearly constant shower of water dropping out of the cliff.  The guide on the bus said the water coming out of the cliff entered the top of the plateau between 800 and 1,200 years earlier.  That’s just a couple hundred years after the founding of Islam and hundreds of years before Columbus sailed to the Americas.  Pretty fascinating stuff.

Here are Debi and her parents at Weeping Rock: 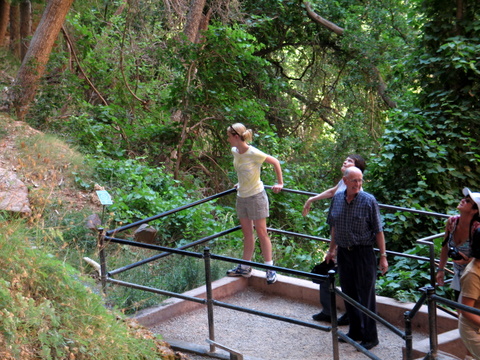 Here’s a shot of the area where all the water drips down from the cliff: 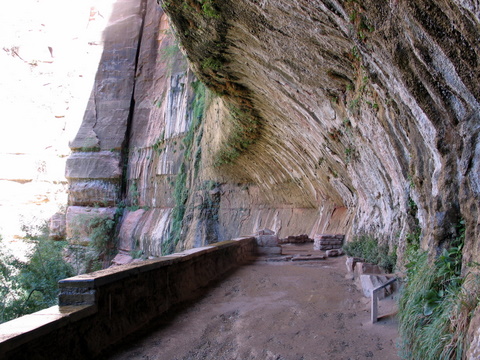 And here’s a panoramic shot I took from Weeping Rock (it’s much better in its full resolution, but it’s also an enormous file; email me if you want to see it):

From Weeping Rock we took the shuttle up to Big Bend, which wasn’t a particularly popular stop for people, but it does have a great view of The Great White Throne, which is the white peak you see in this picture through the red and brown cliffs: 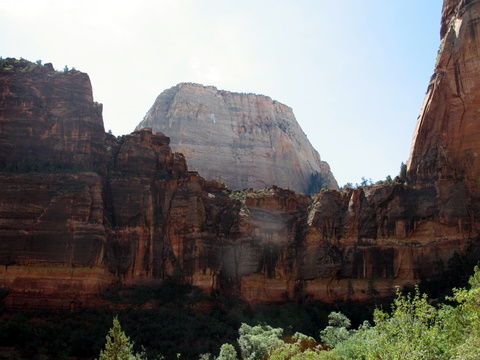 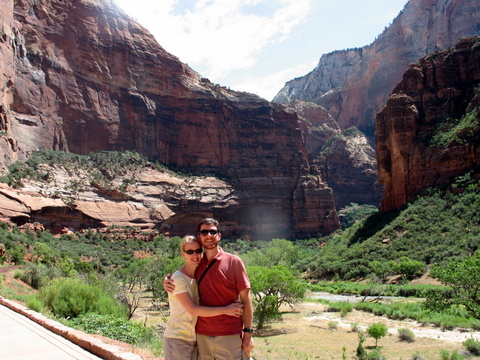 From Big Bend we took the shuttle to its final stop, The Temple of Sinawava.  The Temple is a large, circular area with some rocks in the middle, one of which is named the altar and one is the pulpit.  I couldn’t get a very good picture of those, but they were pretty cool.  The Temple of Sinawava is also the starting location of the River Walk, which is about a 2 mile round trip walk along the Virgin River until the canyon narrows to the point that they call it The Narrows and you have to basically walk in the river.  Debi and I double-timed it to The Narrows and snapped a few photos, then double-timed it back to catch her parents, who were walking the trail more leisurely.  It’s actualy a pretty leisurely trail and even wheelchair accessible.  It also passes a swamp, which is amazing to see in the middle of Southern Utah’s desert.  Here I am at the end of the River Walk trail and the beginning of the Narrows: 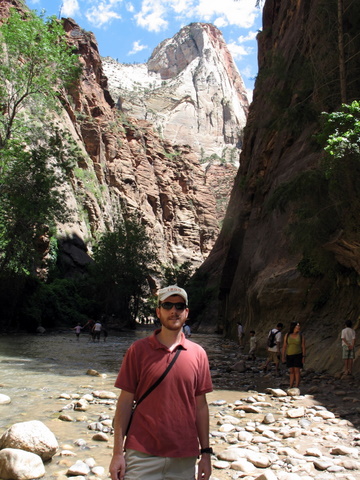 Here is Debi with her parents along the River Walk trail: 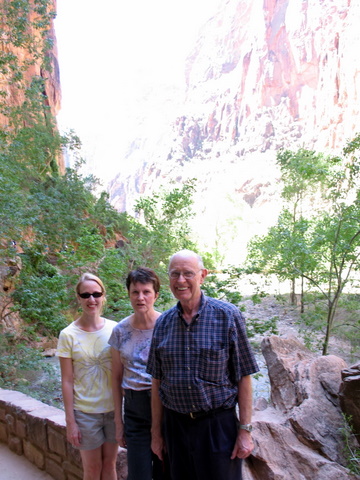 It was on our way down the River Walk that it really started to hit me what the demographics were of the park visitors.  Most of the people were middle class, of course, but more shockingly were the ratios of Europeans and Asians to Americans.  You could tell country of origin based on over-hearing languages.  I would guess there were 2 Europeans at the park for every 1 American (mostly French, German, Spanish, Italian, and Portuguese).  The ratio of Asians to Americans was about 1 to 1.  If you need any more indicators of how weak our economy and dollar are right now, just go visit Zion.  The Euro is doing so well that Europeans now outnumber us in our national parks (either that or Americans are just too lazy and indifferent to visit a park that requires walking around; I’m hoping it’s the money issue).

From The Temple of Sinawava we took the shuttle to Zion Lodge, where we stopped for lunch.  There are two restaurants there, a cafe where you order, pick up your food, and then carry it to your table and a sit down restaurant.  The cafe was swamped with people, so I suggested the other restaurant.  To our surprise, it was nearly empty.  We got a table and our food came out quickly.  It was also very good food and good service.  It was Gary’s favorite part of the park (he’s not a big fan of hiking).

Replenished, we took the shuttle back down to the parking area, hopped in the car, then drove the Mt. Carmel Road through the tunnels carved through the surrounding mountains.  I think I had seen pictures of these tunnels before, but I didn’t realize they were part of Zion National Park.  They were carved in the 1930s and are  barely big enough for an RV or tour bus to pass through right in the middle – meaning they can only allow vehicles in one direction at a time.  Here’s a shot of the entrance to the larger tunnel: 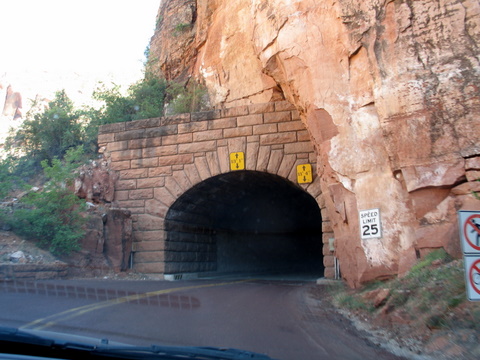 And here’s a shot of the switchbacks on our GPS as we were headed up to the tunnel (they almost double over each other): 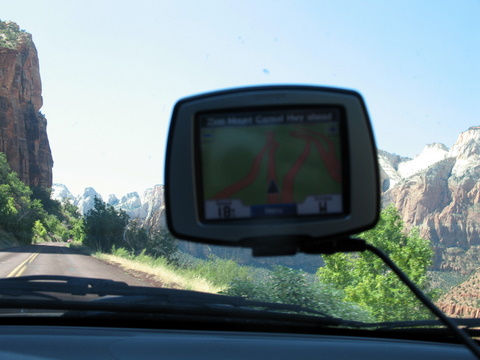 One of the coolest features of the main tunnel is that they carved windows into it that allow you to look into the canyon.  It was almost impossible to get a good shot of the windows, but here’s one Debi snapped as I drove through: 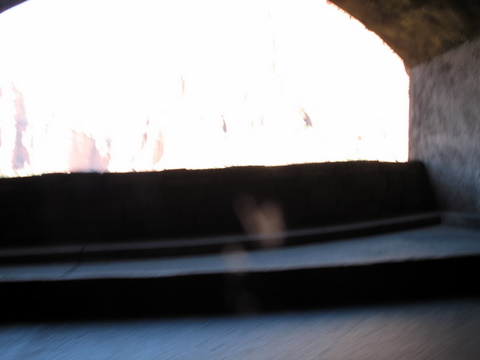 The tunnels have basically been left in their original state, which means there are no lights inside.  You have to turn on your lights to see.  Here’s a shot of the exit of the tunnel: 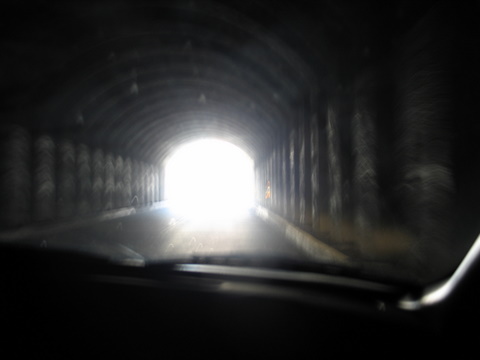 Once you get through the tunnels you are driving on the tops of the plateaus that make up Zion National Park and the canyon below.  The tops of the plateaus are geologically fascinating, with sandstone lines running in all sorts of directions.  It continues for miles.  The sandstone is hundreds of millions of years old and has been raised up over millions of years to a height of nearly 10,000 feet above sea level.  Geology is awesome.  We drove a bit on the plateau, then turned around and headed back through the tunnels then back to St. George.

We got back around 4:00 and most everyone crashed for a couple hours before we headed to the outdoor theatre called Tuacahn, which is about 5 miles outside St. George.  We saw Les Miserables.  The performance was generally pretty good.  The orchestra, unfortunately, was very small, which made it sound tinny and lacking in depth.  But the actors gave pretty good performances and the singing was, for the most part, very good.  Valjean, Javier, and Eponine were all really good.  The play started at 8:30 and ran until midnight, which was pretty late for us, but it was definitely worth it.

2 thoughts on “Zion National Park and Les Miserables at Tuacahn”