A friend gave us a gift card to Carrabba’s Italian Grill a little while back.  We used it on November 10th (it took me almost a month to remember to get the picture off my phone).  We had never been to Carrabba’s, so we were excited to try it out.  But, we’re also cheap.  So, we tried to make sure we could cover our entire meal with the gift card (that’s how we roll!).  Also, we know servings at most restaurants are big enough for the two of us, so we usually split one, especially when we are on vacation.

With all this in mind, we decided on the following: I would order an entree we would both like – the Manicotti.  Debi would order a bowl of soup.  The entree came with a cup of soup or salad.  We’d split the entree; I’d get the cup of soup, and Debi would get the bowl of soup and we would be good to go.  The soup of the day was an awesome tomato soup.  We thought this would fill us up, so we went ahead and ordered it, oblivious to what we had just done…

A few minutes later out comes the waitress carrying these: 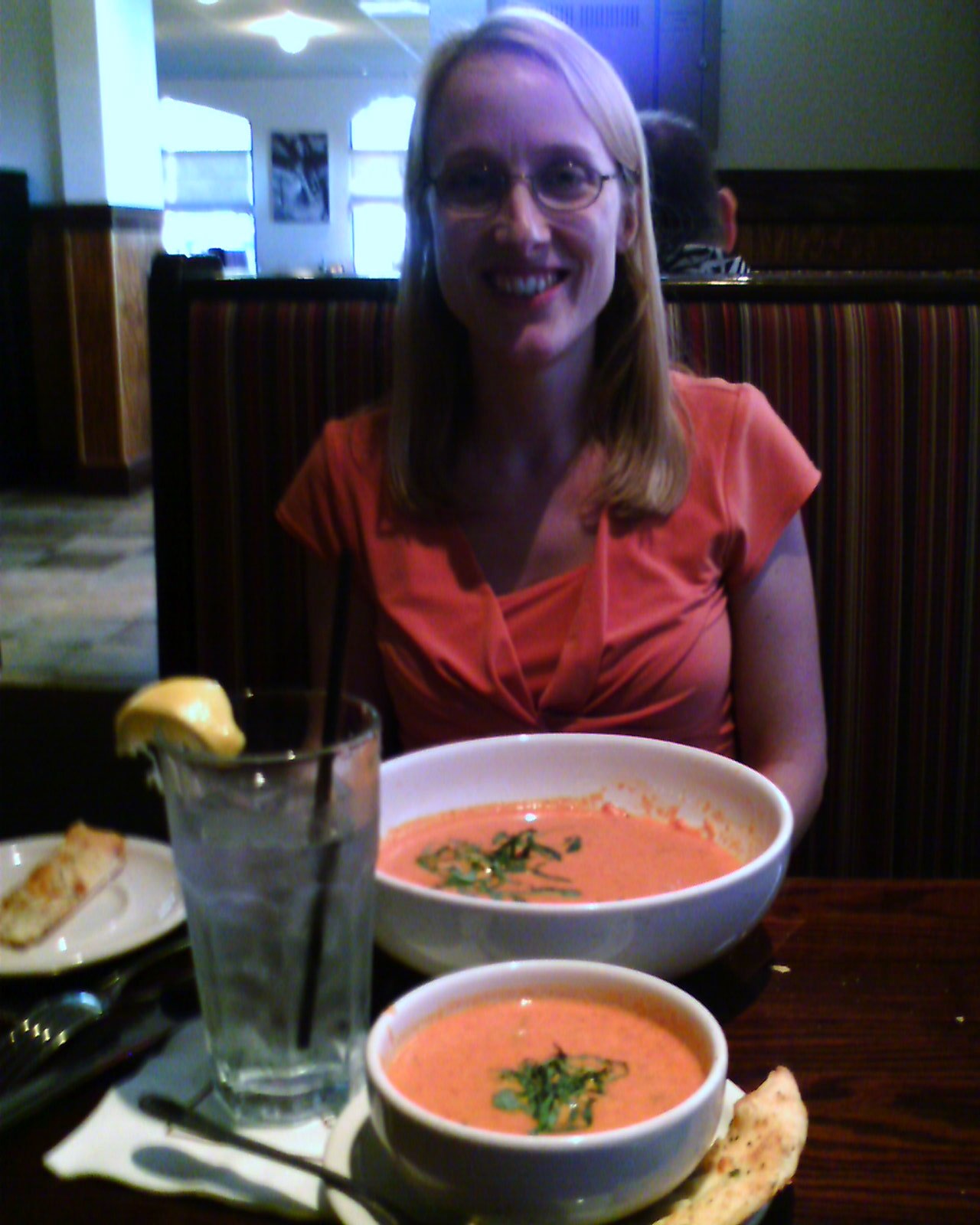 I actually said as she delivered these “bowls” to our table, “You have to be kidding.  That’s not a bowl, it’s a pot of soup!”  The waitress seemed surprised by our surprise.

I know the picture isn’t great quality (taken with my phone), but hopefully you get the point.  The small bowl fathest away from Debi was the “cup” of soup.  That “cup” is as big as the bowls we have at home.  It was easily a bowl of soup.  The enormous vat closest to Debi is what qualifies as a bowl at Carrabba’s.  I know it’s a little difficult to get a good reference to illustrate the size of this bowl, but think about it this way: Debi is 5’4″.  While her waist is quite narrow and she’s very thin, the “bowl” of soup was actually larger than her waist.  There was enough soup in the “bowl” to feed a family of 4.

They served both the “cup” and the “bowl” with a side of bread.  They also brought us half a loaf of bread with olive oil and pesto dipping sauce.

I ate my bowl and bread and was pretty full.  Debi ate about half her bowl and her bread and was stuffed.  I finished off her bowl and was ready to pop.  When the waitress brought out the entree we just laughed.  We told her to just put it into a to-go box. I skipped breakfast the next morning – too full from the night before.

Certainly you don’t have to eat what they bring you at Carrabba’s.  And, just so I’m clear, I thought the soup was great.  But I don’t really wonder why 34% of Americans are obese… If people don’t bat an eye at a vat of soup that is called a “bowl,” people have a serious issue understanding portion sizes.  We estimated that we were served somewhere between 14 and 16 servings of food (1 cup of soup is usually a serving).  We were easily served 8 servings of soup alone.  Add the half loaf of bread, the other bread, and the entree, and we were served enough calories for three people for one day (about 6,000).  I’m sure Carrabba’s is just catering to customer wants, but when will the over-sizing end?