Now that classes have started I haven’t had time to post about pretty much anything. Debi and the baby are fine – no news on that front for the most part. We did have a surprise visit by Debi’s brother-in-law, Brent, who occasionally overnights here (he’s a pilot for Delta). He brought an amazing bag of goodies for us (mostly Debi): tons of amazing maternity clothes from Debi’s sister, Suzy, and a number of groovy things for the baby. Their generosity saved us a few hundred bucks! Groovy!

The day before his visit we stopped by Raymond James Stadium to check out Superbowl activities on our bikes. We were almost the only ones there: (1) on bikes and (2) without jerseys on. As we rode into the morass of people, Debi asked, “So, who is in the Superbowl?” (No, I’m not making that up – it’s true!)  Amazingly, I knew – mostly because I read the local paper (Steelers and Cardinals, for all those out there who are like us). You’d think from all the people wearing jerseys she would have figured it out, but, um, yeah – we’re not a football family. It almost feels wrong that we live just over a mile from an NFL stadium and have absolutely no interest in the games other than to watch fans while so many other people would put the stadium to better use. Ce la vie!

Oh, and if you think Debi’s comment is bad, you need to hear Brent’s. As I mentioned, he’s a pilot for Delta. He flew in to Tampa the day after the Superbowl. While he was waiting in line for the courtesy shuttle at his hotel here in Tampa there were a bunch of other people getting on the shuttle to go to the airport. Just to be nice he struck up a conversation, “So, were you here for the Superbowl?” They all kind of looked at him like he was a little weird.

He nodded, then followed up with, “So, who won?”

Stunned silence all around.  If you know Brent, you know he wasn’t just trying to be funny.  He has zero interest in sports.  He really had no idea.  Once the uber-fans had recovered from the shock of someone being so disinterested in the most watched sporting event in US history, they told him it was Pittsburgh.

Brent, now informed, tried to get into the spirit, “Go Pirates!”

More gasps and silence, then laughs.  He thinks that, by this time, they must have thought he was an alien from another planet.  They really couldn’t believe he was that uninformed.  Brent, on the other hand, thought it was so funny he immediately called Steve (Debi’s brother), who actually follows a number of sports, and told him the whole story.

Anyway, I posted a couple shots from our bike ride.  The first shot above is of all the media satellites on the north side of the stadium.  There were so many I had to snap a photo.

As we rode into the area around the stadium across the various parking lots, I snapped this awesome photo of Debi (don’t tell her I posted it; she isn’t fond of it as I caught her with her eyes closed).  What I was really trying to get a shot of, though, was the prices posted in the background.  You can’t see them very well in this small version of the photo, but it is prices for parking: cars = $50; limos = $150; buses = $300.  I might pay $50.00 for a ticket to the Superbowl (they were being scalped for about $2,500 on game day), but $50.00 for parking?

We rode around for about 30 minutes then got bored and decided to leave.  You basically had to have a ticket to see anything fun – it was all inside the fences they had set up.  So, basically all we could see from the outside was the disproportionate number of Steelers fans – they probably outnumbered Cardinals fans by 3 or 4 to 1.

I did end up watching the game later that night while I scanned some stuff for work.  I figure one football game a year is plenty to watch, though I guess this makes 2 as I actually went to an NFL game in November.

On a completely different note, I found a couple of cool timewasters today thanks to lifehacker.com (cool website that I recommend if you’re into tech).

We have way more important things to do today, but when I saw a post about converting your handwriting in to a font for free, I couldn’t pass it up.  Both Debi and I filled out the forms and created our very own fonts.  Yeah, so, our handwriting kind of sucks, but it was fun.  You’re welcome to download our fonts: Ryan Cragun and Debi Cragun.  I tried creating the font using a ballpoint pen, but it didn’t work so hot.  I think a nice felt-tip pen would be ideal, but we ended up using a fine Sharpie.  It worked, but there is a lot of detail lost as a result.  You can see the end result:

Lastly, I found another cool site via lifehacker.com (I get their weekly round up of the best posts in my RSS feed): www.dynastree.com. It uses phone book data to map out the distribution of surnames in the US.  If you’re a Morgan, alas, you’re not all that unique (no offense to any Morgans out there; I’m sure you’re plenty special in your own way!): 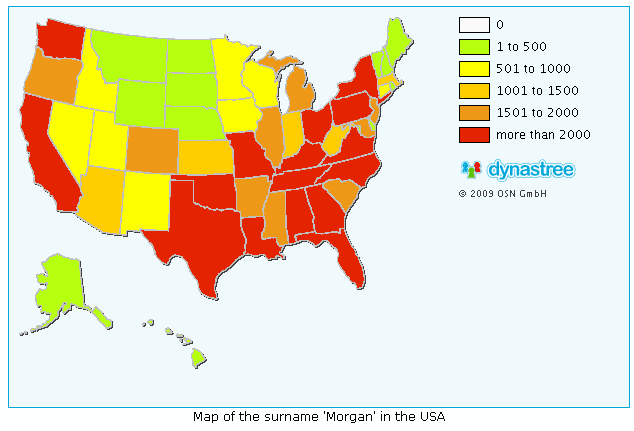 In fact, there are a lot of Morgans all over the US:

If you’re a Cragun, however, you’re a bit more unique: 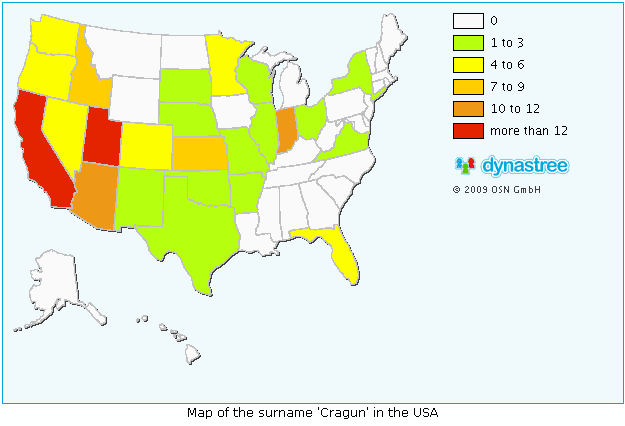 Get this, if you know me and Debi (and why wouldn’t you if you’re reading this?), you know half the Craguns in Florida.  Lucky you!  Here’s the rundown (with the same typo):

Debi has complained before that she never used to have anyone ask how to spell her last name when it was Morgan but now people screw it up all the time.  Well, that’s not all that surprising considering there are hundreds of thousands of Morgans and less than 1,000 Craguns nationwide.  Anyone have a surname more rare than Cragun?

5 thoughts on “a bunch of random stuff”