I’m preparing a lecture for one of my classes in which we are discussing Robert Putnam’s book Bowling Alone.  In the 2nd chapter on political participation he claims,

“The distinction between intracohort and intercohort change is crucial to understanding what’s been happening to turnout in America over the last thirty years.  Very little of the net decline in voting is attributable to individual change, and virtually all of it is generational.  Throughout their lives and whatever their station in life and their level of political interest, baby boomers and their children have been less likely to vote than their parents and grandparents.  As boomers and their children became a larger and larger fraction of the national electorate, the average turnout rate was inexorably driven downward.” (p. 34)

To illustrate this, I created some cohorts in the GSS (1972-2006 dataset) and ran simple crosstabs, looking at whether or not someone voted in the presidential election by their cohort.  The result is depicted in the figure below: 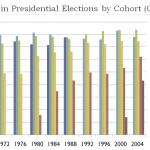 From what I can gather from the figure, Putnam is wrong.  This isn’t a cohort issue at all – it’s an age issue.  Younger people are less likely to vote.  But by the time they reach retirement, they are just as likely to vote as are their grandparents.  Am I missing something?