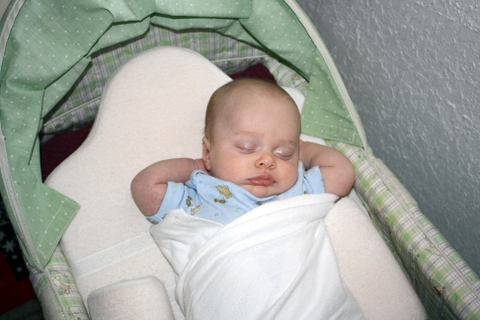 If you’re following the blog closely you’ll note that I said yesterday we usually swaddle Toren to put him down to sleep.  With his arms out, he usually wakes himself up.  That is, generally, true.  But that is also not the way Toren thinks about it.

We’ve noticed a pattern: Whenever I’m holding him to put him to sleep, once he starts to get a little grumpy, I swaddle him then hold him.  He will usually struggle for anywhere from 2 to 10 minutes, wiggling and crying, then fall asleep.  If Debi is holding him, he pretends to be hungry, rooting all over and sucking on anything he can get near his mouth for about 2 to 10 minutes, then he falls asleep.  I guess we should hope that our child is able to tell us apart at this point, but it does seem like he’s trying to manipulate us.

He also plays a game now.  He’ll fall asleep swaddled, but if he wakes up after we put him down, he’ll immediately wiggle until he gets his arms free (or tries for a while until he realizes we swaddled him tight enough that he can’t).  Sometimes he’s able to sleep with his arms free; other times he flails them all over, keeping himself up.  He’ll then whimper until we come tie him up again.  In the photo above it looks as though he tied them up himself by laying on them!