While in Utah I did my annual hike with my two hiking buddies, Tom and Mark.  Having hiked all the highpoints within about a day’s drive of Salt Lake City, we decided to do something local this year.  Of course, it’s not like a local hike is a disappointment – lots of people fly to SLC specifically for the hiking nearby (plenty of mountains around SLC).  Mark picked the hike: Pfeifferhorn or Little Matterhorn.  Most websites say the elevation is 11,326 with a round-trip hiking distance of about 9 miles.

The trail begins at the White Pine Trailhead up Little Cottonwood Canyon, which leads to two alpine lakes: White Pine Lake and Red Pine Lake.  Mark took a picture of the trail that was posted at the trailhead: 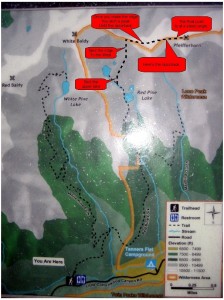 I added the upper trail to the image, which isn’t always clearly marked.  I also added some descriptions (in red) which you can see in better detail if you click on the above image and look at it at full size.

We started hiking around 6:30.  The starting elevation according to my watch, which includes an altimeter, was about 7,400 feet.  There were other people hiking the trail, but it wasn’t overly busy.

Here we are at the beginning of the hike:

It’s actually a very pleasant hike up to the lower lake with scenic views.  It seemed that was as far as most of the people who were on the trail were hiking. Here’s a photo from the lower trail on the way up to the lake:

There was a guy up at the lake who had camped there the night before.  He snapped this shot for us:

Mark, the designated hike photographer, took some great shots of the lakes, like this one:

There were also some beautiful wild flowers just to the East of the lake along the trail.  We were so overcome by the beauty that Tom and Mark had to frolick in the flowers:

From the lower lake you basically cross to the east of it then run into a rock scramble where the trail kind of ends.  If you follow the rocks up, staying to the west of the upper lakes, you’ll eventually run into a ridge that continues from the tree line all the way up to the ridge line that runs east/west.  This is definitely the easiest way to make it to the ridge, even though it is quite steep.  We didn’t see it, initially, but we saw a guy coming down that way and asked him the easiest way to make it to the ridge.  He pointed it out and it was very easy.  It’s obviously the way you are meant to go as there is a clear trail about half way up that ridge that is easy to follow.  Here’s a shot of the upper and lower Red Pine Lakes from the ridge:

You follow the clear trail along the back or south of the ridge until you reach the razorback.  People make it out to be particularly challenging, but it isn’t that bad.  It is a rock scramble with fairly steep sides (if you fall off the north side, you’ll probably die; the south side would just be very, very painful).  But it’s pretty wide – a good 20 to 30 feet in most places – and you can go over the top or to the north (the steeper side, of course) so long as you can scramble over fairly large rocks.  There were only a couple of times that I felt like it was a bit precarious, but for the most part it is not scary.  Here’s how it looks as you approach it headed up the mountain:

That’s Tom in the photo.  On the way up, we skirted to the right or north of the razorback, avoiding the really steep pile of rocks right in the middle.  On the way back we went right over the top.  It wasn’t that challenging.  What is daunting at this point, however, is the last push up the summit.  You can see some green along the ridge up the summit.  That’s basically where the trail runs.  It looks really steep and, well, it is pretty steep, but it’s not terrible.  Also, we had read that the last push is about a 700 foot elevation gain.  After we crossed the razorback, I checked my altimeter and it said about 10,300 feet.  That seemed about right assuming the summit is just over 11,000 feet.  About 20 minutes later, we were at the top.  It actually isn’t as bad as it looks.  My altimeter read 10,600 feet at the top.  I’m guessing there is something wrong with my watch, but based on my readings, the last push is closer to a 300 foot elevation gain, not 700 feet.

We spent about an hour at the top enjoying the view, eating, and snapping photos:

Another group of about 5 guys arrived on the summit just after we did and left just before we did.  There were a few flies and there was a chipmunk on the summit trying to raid our food, but it was actually quite pleasant and the view was great.

Here’s a shot of Mt. Timpanogos to the south:

We were tired, of course, by the time we got to the car, but we were not as exhausted as we’ve been in years past.  This was about the perfect level of hike for us – challenging but not insane.