One of the great features of Tivo (and one of the reasons why we won’t switch to a different PVR) is that you can transfer shows to your computer.  This is great for teachers as you can find shows and copy them to your computer to then use in class.  Alas, switching to Linux meant I would either have to emulate Windows and use that to run the Tivo Desktop software or try out Galleon, which is similar to the Tivo Desktop software, though actually more powerful in some ways.

I opted for Galleon, but boy is it hard to install.  So, having done it a couple times now, I’m going to document it in detail so others can see exactly how this is done in Ubuntu 9.04 based on the directions from the Galleon website.

1) The first step is to install the Java JRE (version 5 or later).  If you have installed the Ubuntu Restricted Extras package, you should have the Java runtime environment already installed, so you don’t need to worry about this.  You can still check by typing the following in a terminal as root:

You should get: /usr/bin/java or: 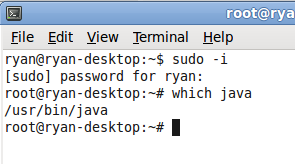 2) The second step is to add your network IP to the “/etc/hosts” file.  To do this you need a couple things.  First, you need to know what your in-network IP is.  Again, this is easily done using the terminal.  Just type in:

The part you need is the inet addr.  It should start with something like 192.168…  (Note: You can also get this by accessing your router and seeing what IP it has assigned to your computer.)

Once you have your in-network IP, you can use the following command in the terminal to edit the “/etc/hosts” file (it’s just a text file):

You’ll initially see your computer listed with the address: 127.0.1.1 (or something like that).  You need to change that to the in-network address you just found: 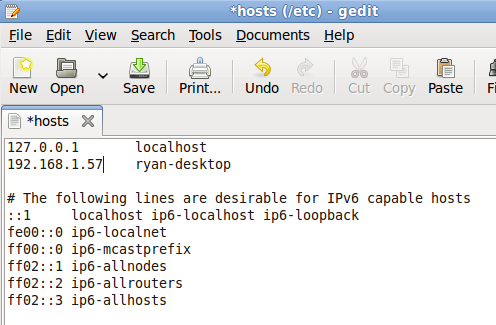 You can only save that file if you accessed it as root, so make sure you did.  Then save it and close it.

3) Download the Galleon zip file to your computer and unzip it to a temporary directory (doesn’t matter where, just make note of where).

4) Here’s where the directions on the Galleon site lost me completely.  You need to use the terminal to navigate to the folder where you just extracted the Galleon files (e.g., /home/USER/Desktop/Galleon), then type:

You’ll then get the following: 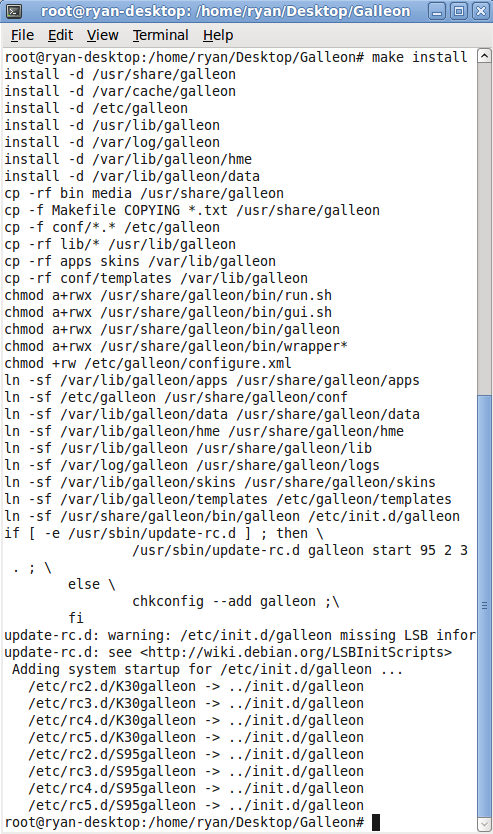 According to the Galleon website, the application is installed under “/usr/share/galleon” and set to start up on boot.

5) You can start the Galleon server right away by navigating to “/usr/share/galleon/bin” (this is where you just installed Galleon) then type:

If the server is already started, it should tell you that.  If not, it will start and tell you, “Starting Galleon Tivo Application Server…”

6) Now, before you do anything else, restart your computer.  Oh, and if you believe in some sort of higher power, you may want to pray.  If not, um, well, I guess we have hope, don’t we?  Sometimes Galleon starts and connects to the server; sometimes it doesn’t.  Why or why not?  I don’t know…

7) Once you’ve restarted and made the obligatory sacrifices to the Galleon gods, try accessing the GUI.  To access the GUI (the easier way, IMO, to manage Galleon’s downloading, etc.), you can navigate using a file explorer (not the terminal) to the newly created directory “/usr/share/galleon/bin” and right click on “gui.sh” then select “Open”.  You’ll get a prompt asking what you want to do;  select “Run” and, if you’ve done everything correctly, you’ll get this: 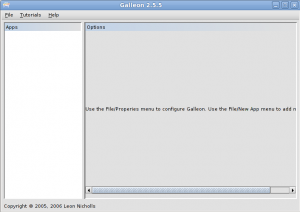 If you don’t get any errors, you’ve done everything correctly. Woohoo!

7) Of course, to get the software to actually interact with your Tivo you need to do a couple more things.  First, now that you’re up, go to “File->Properties” and type in your Media Access Key.  You’ll also probably want to include a “Recordings Path” where files transferred from your Tivo will be stored.  Before you do anything else, go to “File->Exit” to save your settings in the configuration file. 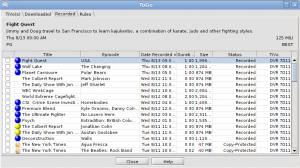 9) You’ll probably want to install some Apps as well. To do that, click “File->New App”.  You can add a variety of Apps.  I usually install the Music, Photos, and Go Back apps.

10) The final test is to go to your Tivo with your Linux box on, go to the list of recorded shows, and scroll down to the bottom of the screen.  If you see something like “Desktop” or something to that effect, you’re Tivo is communicating with your computer and you can transfer shows.  It’s something akin to a miracle.  Go offer another sacrifice (or maybe make a donation to the Galleon programmers) and pray that nothing breaks the magical bond between your Tivo and your computer.

1 thought on “Ubuntu: How to Install Galleon on Ubuntu 9.04 Jaunty”