Toren is my son

Part of the reason men get so jealous in relationships is because they don’t want to be cuckolded into raising someone else’s child.  Women are much less concerned about this as the maternity of children is readily discernible; the paternity, of course, is much less discernible.  While I’ve never truly questioned Toren’s paternity, it’s become increasingly obvious who his dad is because the kid is just like me.  He has sweaty feet (yep, I have sweaty feet), he has the same two crooked teeth I have, he likes adventure and traveling, he tries to lick people (I’ve learned that’s not something you do in polite company… most of the time), etc.  There are a number of other things he does that are similar to things I do, but I caught this behavior one day and was surprised.  Toren wraps his legs around the legs of his chairs: 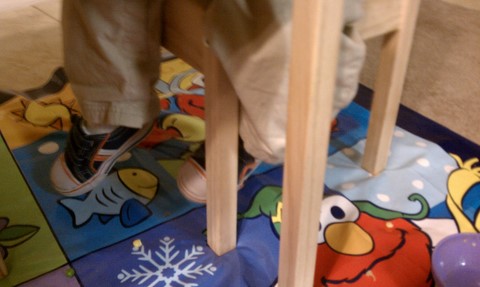 I’m sure other people must do this, but I’ve never really seen anyone do it.  I, however, do it all the time when I’m sitting in chairs in which it is possible.  Weird!  Does anyone else do this?

5 Replies to “Toren is my son”