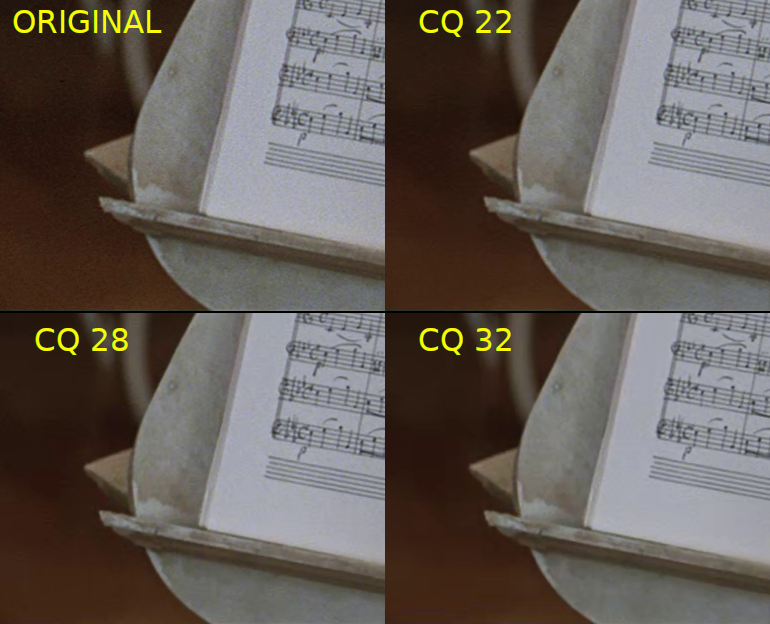 I thought I might see differences in the quality of the screenshots with the musical score (that’s why I chose this frame). I thought the lines might get blurred or the notes would become fuzzier. But that isn’t actually the case. Most of the space savings actually came from the detail in the brown section of this frame. In the original, if you look closely at the bottom left of the image, you can see lots of “noise.” This is basically film grain. The compression algorithm must look for that kind of noise and then remove it. If you look closely at the CQ 22 frame, there is less film grain. In CQ 28, large swathes of the film grain have been removed. And in CQ 32, all of the film grain has been removed and converted to blocks of single colors. Where there is fine detail in the video or distinct color differences, that has been retained. I should probably try this same exercise with a more modern movie shot digitally and not on film to see how the compression varies. Even so, this is a good illustration of how compression algorithms save space – they look for areas that can be considered generally the same color and drop detail that is deemed unimportant.

Scenario 1: Storage space is genuinely not an issue and you have a very fast internet connection, file server, and home network. You should rip your BluRay disks using MakeMKV and leave them as an MKV file with their full size. That will give you the best resolution with lots of options for future conversion if you want.