I wanted it this time to make this:

If you make something with this, please let me know in the comments.

I saw this sign on my way in to work the other day: 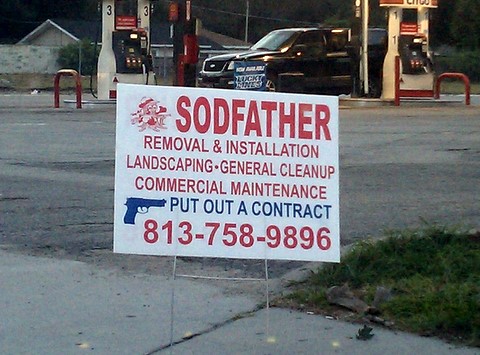 I hope it’s a joke, but it is Florida.  And that means… Well, anything goes.

Much to my brother Josh’s chagrin, I’m a kisser and I kiss Toren on the lips.  Toren has responded when I say “kiss” for a couple months now, but in the last week he’s started experimenting (seems a little early, but whatever).  Thursday, when I went to kiss him goodbye before I left for work, he licked my lips and giggled afterward.  I’m not sure if he knew what he was doing or not, but it was pretty funny.

Wednesday evenings I have a meeting at the university from 6:00 to 7:00 pm.  I work from the rest of the day.  This past Wednesday was no different, schedule-wise, but what happened during that time was a little different.  Because Debi would be alone with Toren for most of the evening, I volunteered to pick Toren up from daycare at 5:30 and dropped him off on my way to my meeting.  Debi had gone into work earlier in the day, so she was dressed in business casual – a blouse and pants.

When I got back from my meeting and walked in the door, Debi was scrubbing the rug in the front room and in shorts and a bra.  Here’s how she greeted me, “I’m done with him.  He’s yours.”  I’d only been gone about an hour and a half.

We give Toren a vitamin supplement – Poly-Vi-Sol – to help with his iron levels.  Because he eats a mostly vegetarian diet, our pediatrician is worried about how much iron he gets.  The Poly-Vi-Sol helps.  However, it tastes like crap and Toren hates taking it.  However, we’ve gotten into a habit of giving it to him just before he brushes his teeth before bed at night.

Debi was trying to get Toren ready for bed while I was gone.  When both of us are around, I usually hold Toren while Debi gives him the vitamins.  And when I say “hold” him I mean – I pin his arms to his sides and hold his head so he’ll take it.  Without my help, Debi was unsuccessful.  Toren hit the dropper, flinging Poly-Vi-Sol around the front room and covering Debi in it.  That wouldn’t be too much of a concern if it was formula or milk, but this stuff stinks and stains.  Amazingly, none of it fell on Toren.  Debi’s shirt and pants were covered, as was her neck, which still smelled like Poly-Vi-Sol when I got home.  She had taken off her shirt and pants and put them in the wash to get the Poly-Vi-Sol out before it stained and was scrubbing the rug where it had fallen.  She didn’t realize that it had also splashed onto the TV, but that wasn’t a big deal – I cleaned it up later.

I helped give Toren his vitamins and Debi went into his room with him to put him to bed around 8:00.  Usually she’s only in there about 15 minutes before he falls asleep and then she comes back out.  Around 9:00 Debi hadn’t come out and I thought she might have fallen asleep with him, which she occasionally does.  But 10 minutes later I heard, “RYAN!”  I jumped up from the couch where I was working on my laptop and rushed into Toren’s room just in time to… watch him vomit all over Debi!

He’s vomited a couple times before and we’re still not sure what triggers it, but it’s always sad when it happens.  I rushed them straight into the bathtub where Debi cleaned the two of them up while I cleaned up the vomit.  It took a while but I got it all cleaned up, then I took Toren while Debi tried to get the combined smell of vomit and Poly-Vi-Sol off her skin.  It took her a while, but I think she succeeded.

It took about another hour to get Toren settled down and asleep before Debi could relax, but eventually he went to sleep fine and woke up the next day fine as well.  We don’t know what caused him to vomit, but he’s fine now.

So, Poly-Vi-Sol stink and vomit in one night.  Not bad!

My thought while cleaning up Toren’s vomit:

Love = Feeling more concerned about your child because he/she vomited than you do about the fact that you have to clean it up.

I’ve seen this billboard a few times in the last few weeks and figured I’d take a picture of it:

Not sure what they were thinking.  Memorable? Yes.  Witty? No.

The last month or so around our house hasn’t been the greatest. Debi came down with an ear infection. Toren likely had one at the same time, but we didn’t realize it right away. Eventually they were both on antibiotics and each of them tried multiple antibiotics before they found anything that seemed to work. Of course, the antibiotics aren’t particularly friendly on the digestive tract. Both Debi and Toren had side effects, primarily diarrhea (yeah, I know, not ideal blog talk). The illnesses coincided with the passing of Debi’s great aunt and finals (more on the funeral soon).

This leads me to my story… Last Wednesday (the 5th) I stayed home with Toren most of the day as he couldn’t go to daycare. This whole time he was having explosive diarrhea, requiring diaper changes pretty much every hour. I put him down for a nap, and when he woke up, I put him on my lap.  He usually takes a few minutes to really wake up and want to do something, so I figured he could just cuddle with me while he really woke up. After a few minutes I noticed a smell and realized he had pooped again. It was powerful enough that it leaked out and onto my shorts. If parenthood teaches you anything, it’s to not freak out around feces (hooray for parenthood!). I wasn’t particularly worried about his diaper or the feces on my shorts, but he needed to be changed. So I took him to the changing table, set him down, and began changing him. Lately, Toren hasn’t wanted to sit still on the changing table. Instead, he immediately turns onto his stomach, then pulls himself up to look out the window by the changing table. Sometimes it’s not worth fighting him while he does this as he really freaks out. So, after getting the poopy diaper off and wiping him clean, I let him stand up. I was just about ready to put the clean diaper on when… Woosh!  Out comes a fresh batch of diarrhea, right onto the changing table.  It was green, gooey, and all in a big puddle.  Leave it to an 11-month old inquisitive child to look down at this point, see something that he doesn’t typically see on the changing table, and think it might be fun to play in it.  So, what does he do?  Before I could start wiping it up, he started stomping in his puddle of diarrhea!  Yep, stomping in diarrhea.  If you had asked me a year ago if I was ever going to write that sentence on my blog, I would have reconsidered the whole kid thing…

Anyway, the stomping is just the start.  Our changing table has, of course, a slick, wipeable surface, for obvious reasons.  Once Toren’s feet were coated in the diarrhea, he couldn’t stand up… Woosh!  He slipped into the diarrhea as his feet slipped from underneath him, coating his front side in his diarrhea.  Mind you, it’s not like I’m a passive observer during this – I’m trying my best to sop up the diarrhea with clean diapers and wipes, but Toren was moving so fast that I couldn’t get to it all before he had covered himself, chest to toe, in his own diarrhea.  At this point, I picked him up, let him stop dripping for a second, and carried him into the bathroom.  I promptly deposited him into the sink, turned on the water, and gave him an impromptu bath.  It took another 30 minutes or so to get him rediapered and the diarrhea cleaned up.  It was, um, well, everywhere.  And for the sake of anyone planning on visiting, I did a really good job cleaning it up, so you don’t have to worry about it being around when you get here.  But it was everywhere.

Oh, and it’s only in the last day or so that Debi has finally started to feel better.  After her multiple rounds with antibiotics, she ended up wiping out all of her intestinal flora, leaving her vulnerable to atypical bacteria, like clostridium dificile.  We think she ended up with a c. dificile infection, which is really, really nasty (what that means, symptoms wise, you really, really don’t want to know).  Suffice it to say, she seems to be on the mend, though she has lost a lot of weight over the last month and it will probably take her months to fully recover.  But we’re doing better now and everyone seems to be getting better, even if we’re not all perfectly healthy.

Almost all of Toren’s clothes are either gifts from family or borrowed from a colleague from UT who has very graciously lent us tons of clothes for Toren to wear since he was born (she has two boys and another child on the way).  Among the clothes she lent us was a striped shirt with very bright colors and orange pants.  Someone else gave us toddler shoes that have orange lions on them.  Put those together with my very strange sense of humor and taste… Et voila – Toren the metrosexual:

It’s not the best picture, but you get the point.  Debi said the workers at his daycare were a bit taken aback by this outfit!  Personally, I call this the “lady killer” outfit.

I saw that my brother Josh had zombified himself on Facebook.  I thought it was funny, so I zombified Toren:

FYI, Debi’s not a fan.  But I think it’s pretty good.  He looks terrifying!

My neighbor’s name is Jesus; he’s from Cuba.  He’s doing some work on our house.  It’s not really news, but I wanted a funny post title on here that would grab attention.  Anyone else ever paid Jesus to do some work for them?

This is probably one of the funniest/cutest videos we’ve shot. Debi was carrying Toren around in the bjorn while she was working around the house. Toren loves this, but apparently it was too much for him this day – he crashed, in the bjorn, on the camera: