I received this fun little piece of mail the other day: 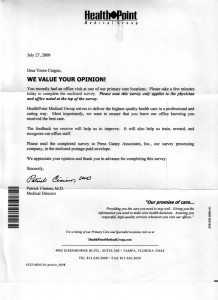 If you click on it you’ll see that it says, “Dear Toren Cragun; WE VALUE YOUR OPINION.” It then proceeds to ask him to fill out a survey evaluating his recent doctor’s visit.

I considered being a bit snarky and sending back the survey with Toren’s hand and foot prints all over it.

How would you respond to a survey sent to your 2 month old child?

TimMinchin.com (courtesy of the SGU)

As I was walking into my building today, a recurring thought hit me, one that was spurred by the opening scenes to the movie Amelie a few years back: Just how many people are having sex around the world at any given point in time?  Yeah, so, I’m weird, big deal!

This didn’t occur out of the blue – I’m teaching a class on the sociology of human sexuality right now and will be talking about frequency of sexual intercourse next week.  As I was preparing my lecture notes for that discussion, it must have triggered this thought again deep in the recesses of my bizarre mind and, for some reason, it surfaced as I was walking into the building.  With about 3 or 4 minutes to think about it before I got to my office, I realized that I might just be able to actually calculate that number.  So, I sat down with my trusty spreadsheet program (OpenOffice, of course), a few reference books, and web access, and tried to come up with some numbers.

First off, thanks to Tom Smith (2003), we have decent data on the frequency of sexual intercourse of people of different ages in the US:

Now, just so it’s clear up front, he only actually gives numbers for people over 18.  So, I estimated that people between 10-17 would average .5 acts per week (mostly thanks to those above 15) and assumed those below 9 would have 0.  I needed those numbers to make my estimates more accurate.

Using US Census Bureau data, I looked up a world population pyramid to get a sense of how many people fall into these age ranges.  Here’s a rough estimate that is close to accurate:

I only needed one more bit of information to make the calculations: the average length of sex.  I found various estimates online, ranging from 2 minutes to 25 or so.  I went with what I thought would be a good average, around 10 minutes.

Using all of the above information, you can actually calculate the number of coital acts per week and per day:

Combining this with the average length of sex, you can then make an estimate of the number of coital acts at any given minute if you divide the number of coital acts per day by 144 (24 x 6; you would multiply by 60 for every minute, but considering each act of sex lasts 10 minutes on average, you need to account for overlap, so you only divide by an additional 6).  This means, the answer to my question is:

About 6 million people are having sex right now!  (I’ll let you provide your own mental images!)

Now, I did these calculations pretty quickly, so it’s certainly possible that my math is off somewhere.  And keep in mind that this is just an estimate, but I’m thinking it’s pretty close to accurate. There is also the problem that the frequency of intercourse numbers are for the US, which means they could be way off for the rest of the world, though I’d guess they are probably close to about average for the world (higher in some countries, lower in others).

The beauty of having these numbers is that you can now calculate how many people are having sex in given regions by turning them into rates:

So, just for fun, here are some numbers for places I’ve lived:

How many people are having sex where you live?

I caught this article in the NYTimes this morning talking about a new software product by Microsoft – Songsmith.  Basically, the software allows you to sing in vocals.  It then generates the music to accompany your vocals based on preferences you set (e.g., lighter or darker mood, rhythm, beat, etc.).  The original advertisement video by the coders who put it together is a bit sad.  But Songsmith has such potential for humor.  How?  Take classic songs, strip out the music and add the vocals to Songsmith.  Then let it work its magic.  I watched two of them this morning and was rolling with laughter.

We finally had a break in the weather yesterday (it’s the rainy season) long enough to go outside and mow the lawn and take care of some stuff outside.  In the process, I came across this:

In case you’ve never heard of “Project Steve” of the National Center for Science Education, here’s a quick recap:

NCSE’s “Project Steve” is a tongue-in-cheek parody of a long-standing creationist tradition of amassing lists of “scientists who doubt evolution” or “scientists who dissent from Darwinism.” (For examples of such lists, see the FAQs.)

Creationists draw up these lists to convince the public that evolution is somehow being rejected by scientists, that it is a “theory in crisis.” Most members of the public lack sufficient contact with the scientific community to know that this claim is totally unfounded. NCSE has been exhorted by its members to compile a list of thousands of scientists affirming the validity of the theory of evolution, but although we easily could have done so, we have resisted such pressure. We did not wish to mislead the public into thinking that scientific issues are decided by who has the longer list of scientists!

Project Steve mocks this practice with a bit of humor, and because “Steves” are only about 1% of scientists, it incidentally makes the point that tens of thousands of scientists support evolution. And it honors the late Stephen Jay Gould, NCSE supporter and friend.

We’d like to think that after Project Steve, we’ll have seen the last of bogus “scientists doubting evolution” lists, but it’s probably too much to ask. We do hope that at least when such lists are proposed, reporters and other citizens will ask, “but how many Steves are on your list!?”

Well, if you hurry and check, the latest Steve on the list is non other than Steven Wayne Morgan, Debi’s brother.  That page is regularly updated with the latest Steve, so catch it before it goes away.  Below is a screenshot for when another Steve is added to the list. 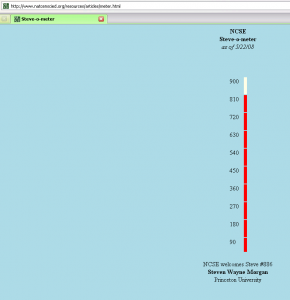 For those who don’t know, my family has a blog for sharing funny stories. I don’t hear funny stories from my family very often anymore (unfortunately), but whenever I do, I post them over there. My sister just sent me a good one. You should check it out.

Debi’s been on an anti-“alternative medicine” kick as of late. She found this comic today that gave us both a good laugh:

Kind of drives home the point 😉
(courtesy of

—————-
Now playing: Fireside Orchestra – The 12 Days of Christmas
via FoxyTunes

Caught this on one of the blogs I regularly read. Boy does it put the argument about gay marriage into perspective:

I successfully defended my dissertation yesterday! Hooray! A few minor revisions and I can finally turn my attention to getting chapters from it published. With all the preparation the defense required, I basically haven’t been doing much else – including blogging. But life has continued…

I’m grading mid-terms from the three classes I’m teaching this quarter and caught this quote that gave me a good laugh. One of the assignments I give the students in my sociology of religion courses is to write a religious autobiography. In describing his parents’ devotion to Catholicism, this student made a slight error in his phrasing,