I’ve had my iPod Nano for just under a year now and really like it. It’s not the most full-featured mp3 player on the market, but it does have a slick interface and works really well… for the most part. So, when I started experience bizarre errors with my Nano about 3 months ago, I started to get a little worried. I quickly checked Apple’s website to see if my Nano was still under warranty, which it was, so I breathed a little easier, but I still didn’t know what was causing the problem with my iPod.

First I’d get this lovely one from Windows:

I also occasionally got this error in ITunes, which really confused me:

(Text: “iTunes cannot read the contents of the iPod “CRAGUNPOD”. Use the iPod Updater to restore the iPod to factory settings.”)

Since my iPod worked 50% of the time, I knew deep down inside that this just didn’t make sense. Here’s a photo of my iPod connecting to iTunes just fine:

You can also see in the above photo that the USB connection icon in the taskbar is weird looking compared to how it normally looks when it corrects okay:

And since my iPod played just fine, I was skeptical that the problem was with the iPod. Even so, there were two more error messages I’d get that didn’t make much sense to me, but do explain why some people recommend some completley useless solutions:

I knew this error didn’t make much sense since all of the ports on my computer are USB 2.0. Even so, it seems to indicate there may be a problem with my ports or maybe with the USB drivers (more on this below).

(Text: “USB Device Not Recognized – One of the USB devices attached to this computer has malfunctioned, and Windows does not recognize it. For assistance in solving this problem, click this message.”)

This last Windows error caused me the most grief. This seemed to indicate that my Nano was malfunctioning. But, again, since it played fine for me when it wasn’t connected, I didn’t think the iPod was the problem.

So, what to do? As any relatively tech savvy geek would, I turned to the internet. I typed in “USB Device Not Recognized” and iPod Nano in Google and got a variety of results. Other people were experiencing similar problems – lots of people (which is probably why you’re here too)! The solutions offered seemed to make sense considering the errors that were popping up. Here are some of the solutions I tried: 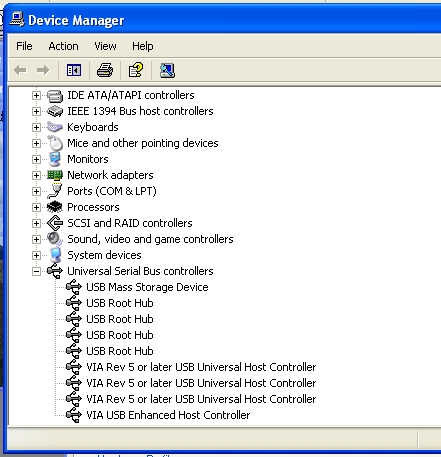 Wrong Solution #2:
Missing USB .dll file – One website recommended checking to see if you were missing a .dll file that is necessary for USB 2.0 drivers to work. Since I had the file in the right folder, that wasn’t the problem.

Wrong Solution #3:
Reset The iPod Nano – This was probably the most common initial response, and was, of course, completely useless. You can reset your iPod by holding down both the Menu button and the center button for a few seconds. Sometimes it would seem to work and the iPod would connect, but other times it wouldn’t do anything. Again, this is not the solution.

Wrong Solution #4:
Restore the iPod to Factory Settings – This is what was recommended by the iTunes software in the error message above. This solution, however, is the most annoying of them all. Why? Because I couldn’t get the damn iPod to connect to a computer to reset it!!! The only way to reset an iPod to the factory settings is to connect it to a computer that has the iPod Updater software installed on it. And since the problem was with getting the iPod to connect to the computer in the first place, this was even worse than useless.

Wrong Solution #5:
Put the iPod into Disk Mode – A little known feature of the iPod is the ability to put it into Disk Mode. Apparently this turns your iPod into a fancy storage drive, but it doesn’t solve the connection problem. Once again, useless.

Wrong Solution #6:
Revert your USB ports to 1.0 – Some “genius” on one forum suggested reverting your USB ports back to 1.0. A real winning solution. This isn’t even possibly on most computers (unless your original hardware has USB 1.0 ports). Don’t even bother with this one…

Wrong Solution #7:
I tried a few more of the wacky, worthless solutions people blindly threw out on the internet, but nothing seemed to work. Frustrated, I took my iPod into an Apple store to the so-called “Genius Bar” where the “genius” plugged my iPod into a computer and it worked fine. At this point I began to wonder if maybe the problem was with my connection cable, so I took that along. He tried it with my cable – no problem. He then gave me a look as if to say, “Why bother me, a genius, with your petty problems. You’re an idiot; now leave!” (Actually, he was nice, but, like so many other solutions, completely useless.)

Wrong Solution #8:
Out of options, I broke down and tried the two solutions I didn’t think would work but had not tried. I reinstalled iTunes. No luck! Then I reformatted my Windows XP computer. Yep, I reformatted the whole damn thing – spent an entire afternoon fussing with it (I’m actually pretty good at it and don’t mind doing it every now and then, so it wasn’t that big of a deal). Guess what? Reformatting didn’t do a damn thing. I still had the same connection problem!!!

Wrong Solution #9:
At my wits end, I decided that I had to rule out every possibility. I broke down and bought a replacement cable for my iPod at CircuitCity. Thirty dollars later I learned that I could experience the exact same connection problems with the replacement cable that I could with my regular cable. It wasn’t the cable. (I did return it – thanks CircuitCity, and sorry about the packaging…).

Out of possible solutions, I seriously considered selling my iPod on Ebay and being done with it. I’d buy some cheap knock off and listen to podcasts on that device. I was seriously frustrated. I’m usually very good at troubleshooting things but I was bordering on defeat….

Then, in a flash of my own “genius,” I tried something different. I straightened out the cable that connects the iPod to the USB port and plugged it into my computer. It connected fine, just like it did about 50% of the time. Then, hesitantly, I applied a little pressure to the end of the connector where it locks into the iPod and BANG!!!! Errors left and right!!!! All of the stupid ass errors I had been fighting with for the past three months showed up. Device Failure! USB Device Not Recognized, etc.!!!! I had finally figured out the problem – the proprietary connector end of the USB cable that comes with the iPod Nano isn’t very good at getting a solid connection. If you tweak the connection just a little bit, all hell breaks lose! Here are some pictures to illustrate what I’m talking about:

Here’s a picture of the connection port on the iPod Nano:

Here’s a picture with the iPod slightly angled so you can see how sensitive the connector inside really is:

As you can see, it’s just a thin little wafer inside there that sends all of the data back and forth. It’s pretty flimsy and has a lot of little connection grooves on it – connections that are easily lost when you add a little pressure to the cable.

Here are two pictures of me holding the Nano. The first is with the cable straight in: 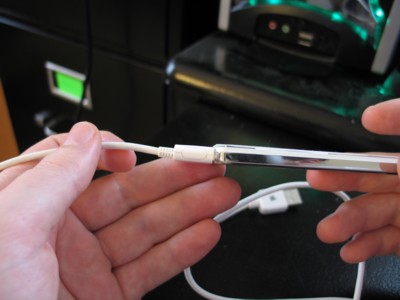 And here I am tweaking the connection just a little bit: 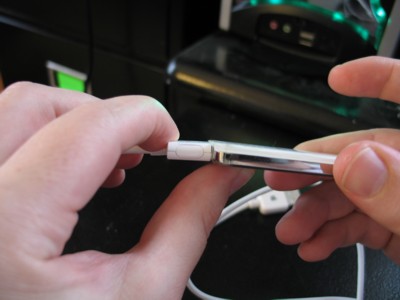 I’m really not putting much pressure on the cable connector and you can see that it is bending away from the iPod. With just that much pressure, the connection between the computer and the iPod is lost. And just so you know I’m not making this up, the screenshots I used for this post were taken today, after I figured out what the problem was (I actually figured things out about a month ago). I tweaked the connector just a little bit and the errors started popping up. I hated making my computer experience the error again because I’m not exactly sure what damage is caused as a result. Certainly the stress on the Nano’s interface isn’t good, but in the name of spreading information, I took the risk. As any good scientist will tell you, in order to test a hypothesis you need to conduct an experiment. I predicted that the problem was the connection between the cable and the iPod. When I tweaked the connection, I got the errors. When I reset everything and made sure there was no tension on the connector, no problems. In my book, that means hypothesis confirmed: the problem is the connection.

Now, understand, I’m a pretty clean-living guy. I may have a few cables running here and there, but I treat my equipment really well. I wasn’t putting any real undue pressure on my iPod cable when I started getting these errors. I wasn’t careful about having my iPod sitting level, but I didn’t think that would be a big deal. I wasn’t sitting there tweaking it or anything. I just started one day. I don’t get the errors anymore, but then I’m fairly careful to lay my iPod completely flat on my desk and make sure there is absolutely no tension on the connector when I connect it. Just the slightest bit of tension will cause the error. I’m guessing that just with regular use this problem will develop in many iPods over time. Why? Poor design! Apple likely went with a proprietary connector to make money. You can buy a regular USB cable for a couple of bucks. Apple charges $30 for a replacement iPod cable! They went with a proprietary connection to make money and that connector is awful (can you say class-action lawsuit?)! It is extremely sensitive and the slightest bit of tension on it will result in errors that don’t make sense to mere mortals.

So, what’s the right solution?:
Lay your iPod flat on a hard surface and make sure there is no tension on the connector. Make sure your cable is straight and connected properly to the iPod. Now, before you plug in the USB side, restart your Windows computer and reset your iPod (hold down the menu and center buttons for a few seconds). Resetting everything seems to be necessary as the error gets everything screwed up (I’m not a programmer or tech genius, but I know it works). With everything reset and your computer back on, plug in your iPod and see if you get the error. I’m betting you don’t. If you do, and you get it all the time on every computer you try, I’m guessing the connection port on your iPod is now shot. Take it into Apple and exchange it!

If this solution doesn’t work for you, well, you can post a comment below, but I’m not making any guarantees. Like I said, I’m not a computer genius. But having tried all of the other solutions I found, I’m fairly confident this is the answer.

46 thoughts on “USB Device Not Recognized with your iPod Nano”