I’ve spent the last couple of weeks buried in my research (some of which is getting published, but I’ll post about that when it actually comes out, which will be in a few months), so I haven’t had much to blog about on here.  But two news stories caught my eye today.

First is this NYTimes Editorial about everybody’s favorite administration – The Bush Administration.  I’m surprised there haven’t been more stories about this, but basically what the editorial details is the fact that the Bush Administration has filled posts in government departments with people inimical too to the very purpose of the department.  To run the Environmental Protection Agency the Bush Administration tapped a guy who wants to block reductions in greenhouse gases.  That makes sense in “Opposite Land.”  But the main point of the Editorial linked above is that, to run the Labor Department, the purpose of which is to be “responsible for occupational safety, wage and hour standards, unemployment insurance benefits, re-employment services, and some economic statistics”, the Bush Administration tapped Elaine Chao, whose record in this position has been deplorable.  Now, before all of the conservative readers of my blog say, “Well, the government shouldn’t regulate labor anyway,” read the Editorial.  Under Ms. Chao, complaints of hard-working employees NOT GETTING PAID have simply been ignored.  I can understand people arguing over minimum wage standards, but is there anyone out there who is opposed to people getting paid for the work they do for someone who has agreed to pay them?  Yeah, didn’t think so.

Second, a science finding.  Turns out, people really can’t tell whether a meat burger tastes better than a vegetarian burger that tastes about the same.  According to this study, if you tell someone who “loves” meat that they are eating meat, even when they are eating something with no meat in it, they can’t tell the difference.  I’m wondering if they got the idea for the study from my experiment with my brother-in-law.  Here’s the original blog post about it (now removed): 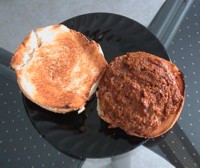 2006, February 14th, Tuesday
So, we’re here in Utah and finding a little time to relax. Amidst our relaxation, I decided to cook for Debi’s family last night. As most readers are probably aware, Debi and I are vegetarians – the rest of her family members are not. So, when I offered to make sloppy joes, I raised a few eyebrows. Even so, we decided to turn the meal into a taste test so everyone could see that you can actually make vegetarian food that tastes just as good as meat-based foods. Of particular interest in this test was the opinion of one of Debi’s brothers who insisted he remain nameless (though anyone in the know will likely figure out to whom I am referring).

This nameless brother agreed to participate in a taste test – Rosemary, Debi’s mom, would make her sloppy joes and I would make mine. We would let everyone try both and decide which ones they liked best. The nameless brother agreed to this scenario, but when I mentioned it to Debi and her mom, they had a better idea. Rather than have Rosemary make sloppy joes to compete in the test, I’d just make two distinct batches of sloppy joe mix and let them decide between them. I normally make two batches anyway as Debi likes hers particularly bland and I like mine very spicy. So, before everyone arrived, I made up the sloppy joe mixes, both of which were vegetarian, and prepared samplers for everyone. I then handed them to Debi who delivered them to the table. I didn’t tell Debi which batch was which but assigned letters to them so she didn’t even know which batch was hers and which was mine (we were trying for a double-blind taste test).

They all tried them and people were divided as to which they liked (the real shocker was that most people liked mine better), but the best part was that the nameless brother insisted that Debi’s batch was real meat and mine was the tofu. It was hilarious to watch him insist that one was meat and one wasn’t when, in fact, both were tofu but just seasoned slightly differently. He was, let’s say, a little perturbed by our subterfuge once we revealed what we had done.

5 thoughts on “politics and meat”