A sociology colleague of mine sent me the following email last night.  I know I’ve been more political than usual lately (for obvious reasons), but I’m hoping this is seen as more sociological than political, even though it is politically biased:

What if things were switched around?…..think about it.  Would the country’s collective point of view be different? Could racism be the culprit?  You decide… Ponder the following:

You could easily add to this list. If these questions reflected reality, do you really believe the election numbers would be as close as they are? This is what racism does. It covers up, rationalizes and  minimizes positive qualities in one candidate and emphasizes negative qualities in another when there is a color difference.

As a final thought, look at the candidates educational backgrounds:

Education isn’t everything, but this is about the two highest offices in the land as well as our standing in the world.  You make the call.

(Ryan again…)  The interesting thing about this election is that, had John McCain not turned toward the Republican base, this would have been a much tougher call in my opinion.  McCain had a record of breaking with Republicans on a number of issues that made him more of a moderate.  Obama is also running as a centrist/moderate, just on the other side (liberal vs. conservative).  But in order to get the support of his party, McCain has given up his Maverick ways and pandered to the Republican base, alienating many along the way.

Last thought… Debi and I had to pick up a few items from Sam’s Club yesterday.  Our Sam’s Club is in South Tampa.  The quickest route from University of Tampa to South Tampa is via Bayshore Blvd., which is a beautiful area, but also the wealthiest part of town.  Here are some home valuations courtesy of Zillow.com: 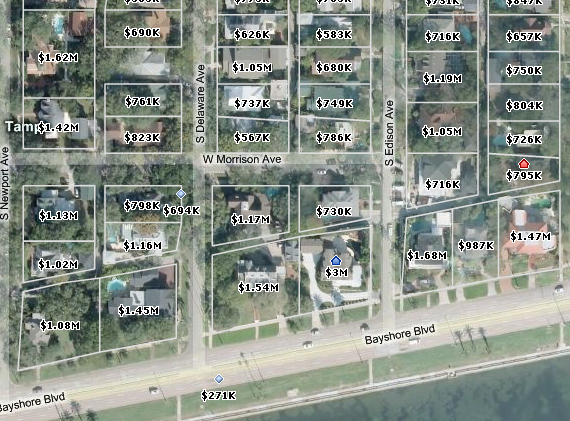 As we drove Bayshore Blvd. we saw dozens of campaign signs.  Take a guess who they were for?

Of the probably 50+ signs we saw, only 2 were for Obama/Biden.  The rest were for McCain/Palin.  And one of the Obama/Biden signs was on the most rundown house we saw.  The take home lesson: A vote for McCain/Palin is a vote for inequality and wealth concentration.  The wealthy know this.  I just wish more poor and middle income people would realize it.

Anyway, even if you don’t agree with my politics, please read up on the issues and the candidates and vote.  What good is a democracy if over 50% of eligible voters choose not to exercise that right?  Our politicians reflect the views of a minority of the population, and that shouldn’t be the case.