I use Kdenlive for editing videos when I have the occasional need to edit videos.  In recent versions of Kdenlive (e.g., 17.07.70), I have been running into a problem that has been driving me crazy.  The line that runs across the timeline editor, which is called the “playhead,” has been freezing in place.  I could click on a location and that location would show up in the Project Monitor one time, but when I tried to click anywhere else in the editor or move the playhead, it wouldn’t move.  It would stay where it was.  This made Kdenlive unusable.

Here’s a video illustrating the problem:

It took forever to find the solution to the problem, and the solution reveals that this is a bug in this version of kdenlive.  Apparently what is causing the problem is having multiple processor threads turned on in the settings in kdenlive.  Go to Settings -> Configure Kdenlive.  You’ll get this window: 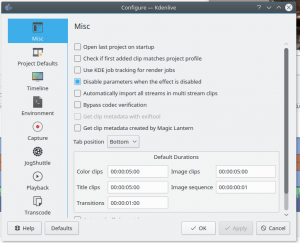 Go to the Environment tab and you’ll see this: 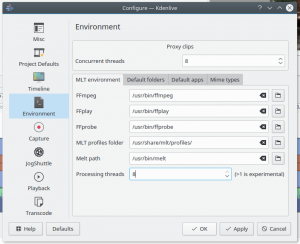 If you’re having this problem, you’ve probably got your Processing threads variable set to something other than 1.  I had mine set to 8, thinking the 8 core cpu I have would speed up the editing process for 4k video.  As it notes in the screenshot, any threads above 1 is experimental.  By experimental, I guess the Kdenlive developers really mean “unusable.”

To solve the playhead not being movable problem, set the Processing threads variable to 1 (I tried other values as well, and only 1 works).  Hit OK. 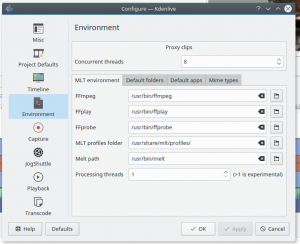 Then restart Kdenlive. You should now be able to drag your playhead around again and edit videos, like this: