After spending the night at America’s Most Wanted Bed and Breakfast in Colorado City, we were headed home.  But we wanted to do a little more sightseeing on the way.  I have done a lot of hiking in Zion National Park, but primarily in the main entrance (southern side of the park), and didn’t realize that there was a Western entrance that is right off of I-15. My brother-in-law mentioned it to me and I thought it might be fun to check it out on the way home.

I had scoped out the hikes in advance and had discussed the possibility of doing a hike with Toren.  Given his age, we weren’t sure if he was going to be up for too much hiking, but he agreed to try a 5-mile hike.  The hike in this part of Zion National Park that seemed best suited for his skill level was Taylor Creek Trail.

We pulled into Kolob Canyon around 10:00 and drove around to check out the sights for a bit.  Here’s a panoramic shot of Kolob Canyon:

And a shot of Debi and Toren at the lookout: 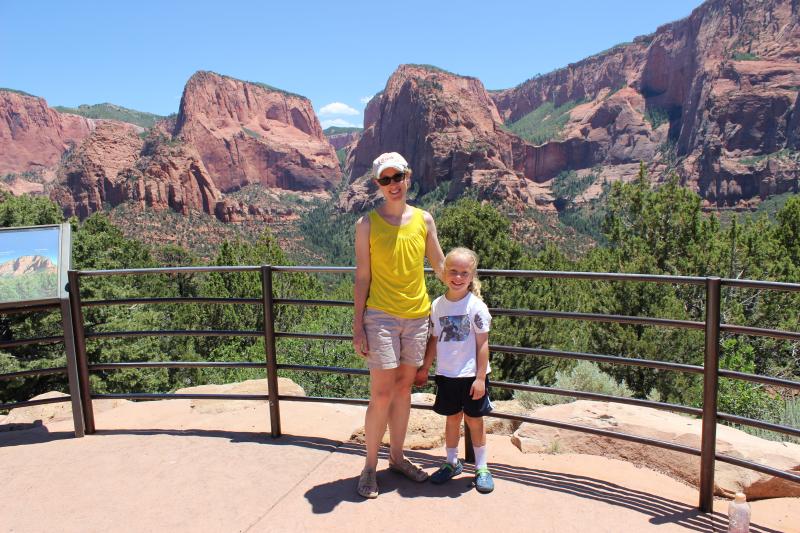 After checking out the sites we then headed to the parking lot for the trailhead of Taylor Creek Trail.  Toren was actually pretty excited about the hike initially and did pretty well going down into the canyon and for a while when the trail was flat.  But it did get hot and he started to get a little tired. After a while, he started to say that he didn’t think he could go any further and he kept asking to stop for breaks.  That was probably close to the 1.75-mile mark.  We told him we were close to the end and tried playing games to keep him distracted.  Eventually, we made it to the grotto at the end of the hike and he suddenly had all of his energy back as he wanted to go explore.

Here’s a photosphere I took at the grotto:

And a picture of the three of us at the grotto:

We stayed at the grotto for at least 30 to 45 minutes as Toren was having fun and we thought we’d enjoy the place.  However, a group of young boys showed up eventually and they ruined the ambiance as they were yelling, screaming, and generally being annoying.  We left at that point so we wouldn’t have to deal with them on the way out.

Toren did well for a while on the way out but eventually started getting tired again.  To keep him entertained, we tried to find lizards, insects, and other animals and kept trying to draw his attention to cool plants, fungi, and other cool stuff.  It worked for a while but he eventually lost interest.  At one point he said, “Let’s not pay attention to nature, let’s just get out of here.”