A couple of weeks ago Debi flew down to Tampa to interview for a job (more on jobs below). For cheap, last minute flights between Tampa and Cincinnati, US Airways has great deals. So, she was booked on US Airways. And, to make the flight as cheap as possible, she flew out of Dayton, which is about an hour from Cincinnati. Her flight to Tampa was relatively uneventful. But her flight back to Dayton, well, it never quite made it. She was delayed getting out of Tampa, which made her miss her connection. She was then sent to Washington D.C., where she was told that they could not get her to Dayton or Cincinnati that night. They claimed the problems were due to weather and air traffic, which she finally got them to admit was bullshit. Even so, they wouldn’t pay for a hotel or anything else. Additionally, she had a really important meeting the next morning and really had to be there for it. She finally got one gate agent to book her on a flight to Columbus, OH and I agreed to drive up to Columbus to pick her up. It was a 4 hour round trip and her flight didn’t get in until midnight, but she made it to her meeting. She was fuming at US Airways, who repeatedly lied to her and were not at all accommodating.

One bad encounter is enough, but for her second job interview, guess which company Debi flew with? Yep, US Airways. And, once again, they totally screwed her over. She came down last Friday morning for a job interview. The flight down wasn’t a problem – hooray! The return flight, however… She was supposed to leave Sunday morning for Cincinnati. She checks in, gets on her plane, and everything is going smoothly. Then they take off. Suddenly the pilot is on the speaker system telling them they have to return to the airport due to a mechanical problem – the landing gear won’t go up. They fly over the tower so the tower can confirm, then land. They pull into a terminal and a few technicians get on and fidget around. A few more fidget outside the plane (all this with the passengers still on). Then the technicians claim it is fixed and they taxi back out to the runway. They are already delayed enough that most are going to miss their connections, but they are going to try again. They take off and… here comes the pilot again, on the speaker system… The problem isn’t fixed; they’ll be returning to Tampa. This time they take all the passengers off, then cancel the flight. She took off twice for the same problem then had the flight canceled.

Once she gets inside the terminal, the gate agents who are trying to rebook everyone tell her they can’t get her another flight to Cincinnati that day. The next available flight will be the next morning (Monday). She ended up spending another night in Tampa with me (not complaining about that – but she did have to use up a vacation day at work). At least her re-scheduled flight went off okay… She is mad enough at US Airways to never want to fly with them again. I’m not sure what the problem is with US Airways (Debi’s brother-in-law, a pilot for Skywest, says they are just a sucky company), but they have some issues.

As for the job interviews… Debi had two in-person interviews here in Tampa. She ended up being offered both positions and spent the weekend she was here with me struggling over which position to take. She ultimately chose to join me at the University of Tampa in a contract position teaching genetics, even though the other job paid more and was a permanent position. She has always wanted to see what teaching college is like, and now she’ll have the chance. She’ll be a visiting instructor teaching genetics in the Biology department. So, she has a job now, too. We’re excited – we’ll be carpooling (or riding our bikes in to work together – it’s only a few miles from where we live to the campus – about a 5 minute commute!).

Finally, at the graduation ceremony last month there were some professional photographers snapping photos of the graduates. They then sent us out a mailing showing the photos and inviting us to buy them. The prices were, of course, ridiculous, but I decided to go ahead and get one of them (the others were pretty crappy). So, here I am, posed, in my robes: 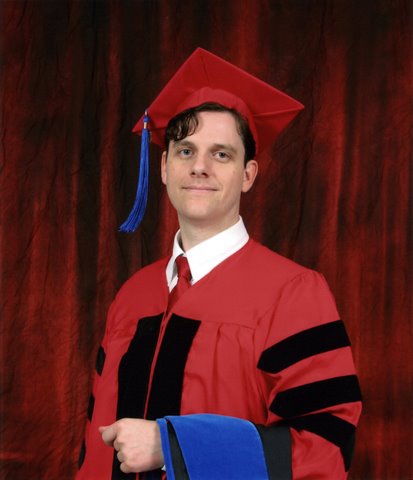