I have an aunt and uncle who are super nice and really great people.  But they also happen to forward to me (or Debi) every political email they receive.  They are pretty conservative, so the emails tend to be on things that I disagree with (as a liberal independent).  I’ve probably received close to 10 emails from them, at least half of which have been completely untrue or so filled with misconstruals of reality that I had to respond to them and clear up the errors.  But I can’t just respond to the sender; I feel obligated to respond to everyone on the email list.  I probably shouldn’t, but I figure most of these people won’t find out how the email is inaccurate unless I say something.

So, Debi received this email from my Aunt and Uncle a couple of days ago:

His explanation is so weak,what is wrong with people supporting this person.

Obama Explains why he doesn’t salute the U.S. Fla[g]

I sure hope this gets around before Nov.!!!

Hot on the heels of his explanation for why he no longer wears a flag pin, presidential candidate Senator Barack Obama was forced to explain why he doesn’t follow protocol when the National Anthem is played.

According to the United States Code, Title 36, Chapter 10, Sec. 171, During rendition of the national anthem when the flag is displayed, all present except those in uniform are expected to stand at attention facing the flag with the right hand over the heart.

‘As I’ve said about the flag pin, I don’t want to be perceived as taking sides,’ Obama said. ‘There are a lot of people in the world to whom the American flag is a symbol of oppression. And the anthem itself conveys a war-like message. You know, the bombs bursting in air and all. It should be swapped for something less parochial and less bellicose. I like the song ‘I’d Like to Teach the World to Sing.’ If that were our anthem, then I might salute it.’

Yes, ladies and gentlemen, this could possibly be our next president!! I, for once, am speechless. He has absolutely NO pride in this country!!!!! This is outrageous!!!! He doesn’t deserve to be dogcatcher!!! (Oh, sorry dogcatchers, I mean you no disrespect.)

LET’S SEND THIS CLOWN DOWN THE ROAD KICKING ROCKS!!!! Forward this to EVERYONE YOU KNOW!!!!

Now, if you’re like me, and you actually pay attention to the news, you’re probably thinking, “I would have heard it in the real media if Obama had said something like this.  Oh, and that quote sounds more like something George Bush would say in his eloquent two-year-old grammar, not what Obama would say.”  If that’s what you thought, kudos to you.  I thought the same thing, so I spent 2 minutes looking this up online.  Here’s the email I sent back to everyone on the email list:

You may or may not know me, but I feel obligated to do something to stop the spread of this email chain and rumor-mongering. The email below is based on a satirical news column, meaning it IS NOT TRUE! Barack Obama NEVER SAID what is alleged in the email below. You can verify this yourself here:
http://www.factcheck.org/askfactcheck/did_obama_say_the_national_anthem_conveys.html

If you want the real scoop on Barack Obama respecting the flag and the national anthem, check this website:
http://www.snopes.com/politics/obama/anthem.asp

I don’t really care whether you are for or against Barack Obama, either way you should at least have your facts straight. If you passed this email on, please pass on the corrected information I’m sending. If you don’t, you should feel guilty for misleading people.

Yes, I always feel a little awkward sending this kind of stuff, but considering my career as an educator, I feel like it is the right thing to do.  Also, having sent similar emails in the past, I didn’t think much of it.  Then I got this response:

I appreciate your concern for making sure the truth is being represented with regards to Barack Obama. You may be right, but then again I have a photograph on my computer showing Barack standing in a group during the playing of the National anthem, which clearly shows him not showing the same respect to the flag as all of the others in the photo. He definitely has some issues with the flag and the national anthem. I personally do not think he is ready for prime time as the commander in chief of our great nation.

It is obvious to me that your defense of Barack Obama and an earlier defense of the ACLU (a prior intrusion into our mail boxes) has put on display a very liberal bias on your part which fails to impress me, even with your previously stated resume. I suspect you may be a little like the ACLU (Anti Christ Litigation Union) claiming to be the protector of our civil rights, but having an obvious agenda that will only see the light of day when exposed by others.

Thanks for setting us straight with regards to Barack. I’m not excited about McCain, but he is light years ahead of Obama in Patriotism and preparation to lead the nation.

This response was sent to everyone on the email list as well.  As my goal is clarification of the main point, not convincing people they are wrong, I didn’t respond to David.  But I did lose hope that my efforts were helping make the US electorate a little more educated.  When a picture trumps actual research, you know our country is in trouble.

I am also on this e-mail chain for some reason! But I thought it was rather arrogant of you to pass on e-mails that are not true of others (regardless of whether you think they are light years behind someone else on certain issues or not). If the message is not true than you are in the wrong to send it onto other uninformed individuals making them believe untrue things of others. It is clear that you are a believer in Christ by your comment about not liking the ACLU and giving them a different name than is theirs, but certainly your actions of passing on untrue material of others does not support this professed belief! I personally am grateful for those who have the courage to take a stand when things that are NOT correct are passed around. I hope that you might also have that same courage. I wish the best to you.

So, I was feeling pretty good.  Then I opened my email this morning to find this:

Frankly, who the heck cares? Stop sending me junk mail. I’ve never sent anything to you – so stop sending it to me!!!!

The FACT that Obama is an inexperienced, slick, lying, socialist flip-flopper whose voting record pegs him as a Kennedy-Dukakis Liberal and who has directly communicated his intention to raise taxes to levels that will crush economic growth and prosperity is all I need to know about him. If I wanted to live in a socialist haven with a perpetually depressed economy and with liberal government micromanagement and over-regulation, I would move to such a place.

What’s the take home message?  As you consider the upcoming election, 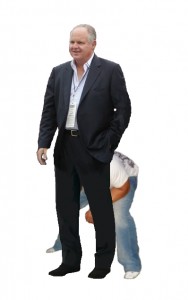 especially if you support Barack Obama and are actually hoping for a change in direction in the US, keep in mind that there is a large segment of the population that isn’t really interested in facts.  From the content of these emails, I’d guess they make their decisions on who to vote for based on just a couple of pieces of information gleaned from their environment that get them emotional (FYI this is supported by social scientific research, which indicates the best way to predict voting behavior is to find out what a person is emotional about, not what they know).  In short, depending on what percentage of the voting public thinks this way, I’d say McCain has a pretty good shot, not because he is a great candidate, but because people have their heads up Rush Limbaugh’s nether regions and are too afraid to pull them out to think for themselves for a minute.  In fact, when I tried to pull their heads out for a second, they slapped me away and shoved it in further (see picture for illustration).  Unless Obama is better at extracting heads from nether regions, McCain will probably win.

(Note: Photo courtesy of yours truly.  I wasted quite a bit of time putting that one together this morning.  But it does make me laugh.)

7 thoughts on “why John McCain will probably win…”