(Note: I forgot to mention the science outing on Day 3 when I originally posted it.  You may want to go back and read about our ant war experiment.)

We felt well rested after a nice night of sleep in our tent.  We started the day with a slightly longer hike, climbing all the way to the top of the plateau, well, I did.  It was a bit treacherous just below the summit, so I left Debi there and climbed to the top.  It was perfectly flat and covered with brush.

My Dad came prepared to build just about anything, but one thing he had in mind was a zip line for the kids.  Lake Powell has plenty of cliffs and he thought he could figure out a way to anchor a rope over a stretch of water so the kids could zip into it.  Most of the adults spent about 3 hours working on the zip line.  Turns out, this is a pretty bad idea unless you have a steel cable and a winch.  We stretched the rope over the stretch of water and down to a little island, but had to try to tighten the rope by hand.  My Dad was holding the anchor in place while I cranked on the rope and Debi helped.  I was standing close to the edge of the island, cranking as hard as I could when… the knot I tied gave way and the rope came loose.  I was pulling hard enough to launch me a good five feet into the water.  Debi was right there, watching the whole thing.  She now says that’s her favorite part of the trip: the look on my face as I plunged into the water.  I was fine, of course.  I just surfaced with a doubly-bruised ego – for falling and for my knot coming undone.  As we tried to re-run the rope, it got caught in my brother Danny’s prop twice.  We did pull it taught a second time and actually tried it, but there wasn’t enough tension to even hold a small child.  Three hours, an unexpected plunge into the lake, and two screwed up props later, we scrapped the idea.

If you’re reading this travelogue closely, you’ll remember that one of Debi’s truths from the previous night was that she had never been fishing.  My Dad and brother, along with a couple of nieces and nephews, had worked out a pretty good recipe for the fish off the back of the boat.  There recipe was good enough that you could basically put a baited hook in the water and the fish would fight to bite it.  They weren’t keeping anything, but the nieces and nephews got a kick out of it.  Debi walked back there while they were playing around with them and they gave her the rod.  Two minutes later and she’d caught two fish.  Here she is with the second one: 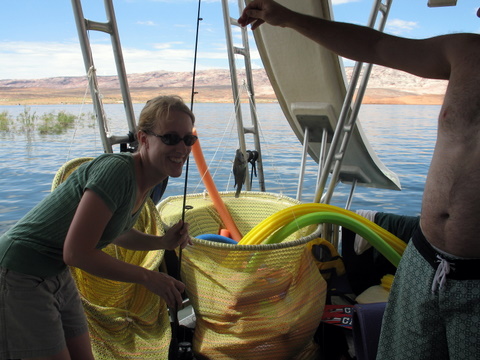 My brother, Mark, and his wife, Hillari, came early in the morning with my niece, Karlie, and a friend of hers, Missy.  Apparently the year before Mark took the grandkids on a hike and they all liked it.  So, he set up a hike for this year and took pretty much everyone again.  He sent us up the hill to a groovy crater-like formation he found.  We stopped and shot some pictures there (I didn’t, but I’m going to try to get some from my siblings).  We then split up, sending the younger kids down the rock to the boat and the older grandkids and my siblings down a narrow, narrow canyon.  In true Mark fashion, the canyon he sent us down was virtually impossible to climb back up and it ended at about a 20 foot cliff.  The only option: jump.  As an avid hiker, Mark sent me down the canyon first to make sure it was safe.  Safe, mostly.  Easy, definitely not.  But everyone did it and no one got hurt.  We did have to send a lot of stuff over the cliff in backpacks using a rope (we all had shoes, shirts, cameras, etc.), but it worked out in the end.  Here’s the canyon: 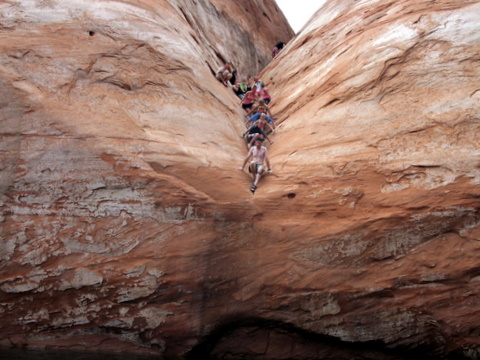 I’m getting ready to jump.  Yeah, that guy at the base is me, in my sexy whiteness!  The water is just below the bottom of the picture.  It’s probably a 15 to 20 foot cliff, maybe a little less.  Here are a couple of pics Debi shot (she went down with the kids to make sure they got down safe; she actually really likes jumping off things like this).  This is my sister, Tammy, doing the nose hold jump: 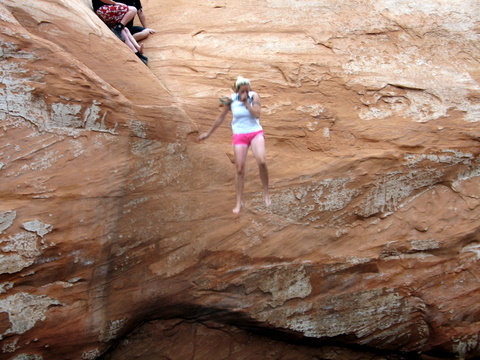 Here’s one of Tammy’s kids, Corbin.  This was just a really good shot by Debi: 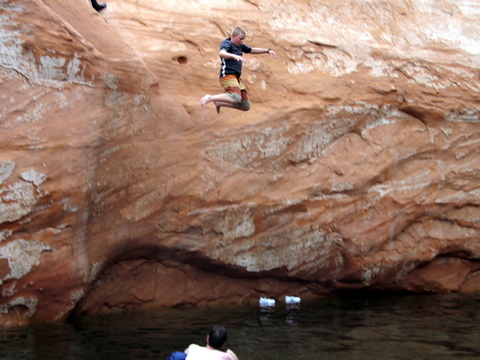 I’m floating in the water at the base in case there is a problem.  This next one is my brother Mark, the crazy one who planned the hike: 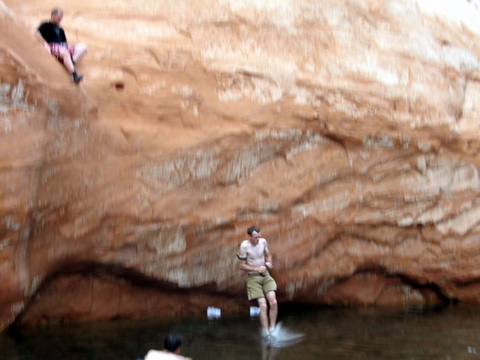 Here’s a shot of everyone who climbed down the canyon and jumped: 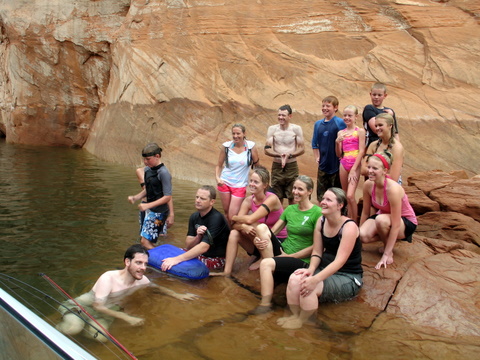 From here we swam to a little beach that Mark dubbed “Cragun” island because someone named “Cragun” had carved his name in the cliff above the island (how Mark found all of this in the 5 hours he was here is beyond me): 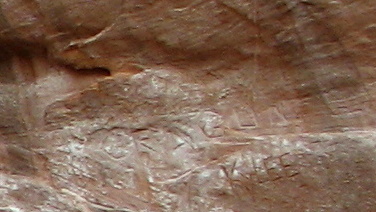 We got one last photo of almost everyone on the island: 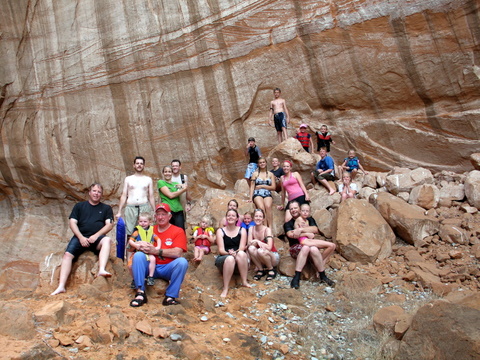 Debi and I cooked dinner for everyone.  I made peanut pad thai and a broccoli and tofu in peanut sauce.  It was also farely well-received, though some of the kids didn’t dig it.  After dinner we had a talent show, which is a Lake Powell tradition.  It was entertaining.  It was also a calm night, meaning we got a good night of sleep in the tent.