Day 4 of our Key West trip dawned overcast, drizzling, and freezing!  I kid you not – it colder in Key West than it has been since 1873: 42 degrees.  Of all the times to visit the Keys…

Trying to make the most of it, we opted for inside stuff in Key West, with one exception.  We stopped by the southernmost point marker: 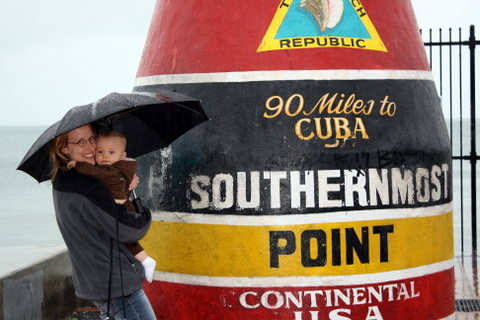 As you can see, it wasn’t the nicest weather.  It was drizzling and freezing.  We stepped out of the car literally long enough to snap just a few shots, then jumped back in.  (FYI, Key West is not the southernmost point in all of the U.S., just the continental U.S.  And the position of the marker is probably not the southernmost point in Key West, but it makes for a good photo opportunity, right?)

Debi wasn’t very interested in the Hemingway House, and having been to half a dozen butterfly conservatories with her, I wasn’t interested in the conservatory, so we split up.  She took Toren and visited the conservatory while I stopped by the Hemingway House.  According to Debi, Toren loved the butterfly conservatory – he just stared and stared at the butterflies.  Debi, of course, loved it as well, and also thinks it is the nicest butterfly display she has ever visited (and considering how many we have visited, that is saying something!).

Meanwhile, over at the Hemingway House, I paid the obligatory $12.00 (every attraction that isn’t free in Key West costs exactly $12.00; it’s weird!) and entered the property.  While it’s always cool to think about the famous people who have been in a place you are visiting, the house itself was a bit underwhelming.  It is certainly a big, nice house, but the displays throughout our quite slipshod.  It’s pretty clear this is a for-profit, lackluster operation lacking the guidance of professional preservationists.  The furniture and house are left open to the elements and the labels describing the items on display were poorly written and often illegible.

I walked around the whole property in about 15 minutes while waiting for the next tour to start.  While the tour was informative, Dave, the guide, was not very good.  It was clear he had given the exact same tour hundreds of times before.  His jokes were well-rehearsed, but his timing and delivery were terrible.  I’m usually not one for commenting on tour guides so long as they do a decent job, but I actually think Dave’s delivery made the tour worse than if someone had simply talked about the house in a monotonous tone.  I know I’m being critical, but I think a good tour guide would have made this much more interesting.

So, the displays were slipshod and the tour was less than mediocre, but there was one other thing that helped soured my Hemingway House visit – the cats.  Hemingway apparently had a famous 6-toed cat.  The owners of the house have apparently allowed the offspring of that cat to breed without restrictions, resulting in a brood of about 50 cats running around the property.  The cats are given free reign to go wherever they want – including on the antique, original Hemingway furniture or wherever else they are comfy.  I’m not a cat person, but generally was able to ignore this bit of animal favoritism.  But it actually seemed a bit over-the-top when I visited Hemingway’s writing studio only to be overwhelmed by the smell of cat feces!  His studio has all the original furniture, but is caged off so you can only see it from behind bars.  But the cats can get in, and get in they have, as the smell attests.

Anyway, here are a few shots of the house:

With the tour (30 minutes), my 15 minute self-guided tour, and me taking another 15 minutes to take photos, the whole visit lasted about an hour.  After my hour tour, I headed back to our hotel to warm up and check the news until Debi was done.  She called me over 2 hours later to say she was done (she spent over 3 hours looking at the butterflies).  From there, we had hoped to visit the San Carlos Institute for a free visit to their museum, but it turns out that Mario’s conference was actually being held there.  This meant a large part of the museum was closed.  However, we were still able to kill two birds with one stone by meeting him at the museum.  I don’t know that we missed much as the San Carlos Institute’s museum is only slightly better documented than the Hemingway House and is really probably not worth a visit unless you are a hard core pre-Castro Cuba afficionado.

We then went to dinner with Mario at Blue Heaven, which is, apparently, a Key West landmark now.  But from what we could gather, it was way over-priced and the food we got wasn’t great.  Perhaps the meat-laden $30.00+ dishes are worth talking about, but the cheapo stuff we ordered certainly wasn’t.  We dropped Mario off for his evening reception then headed back to the hotel.