I should really be doing other work, but after reading the news this morning, it dawned on me that what I really wanted to do was write a short blog post about “The True Meaning of Christmas.”  (NOTE: For all the readers of my blog who are religious, this is your cue to stop reading now if you don’t want to hear me discuss the historical origins of Christmas.)

While other people have put similar ideas on paper before, I wanted something I could refer back to easily for future reference.  I also wanted to extend those ideas slightly.  So, I give you my version of the True Meaning of Christmas:

1) In pre-history, December 25th didn’t actually exist as a date, that had to await the invention of the Gregorian calendar.  Calendars were, of course, under development, but none of them had a pre-specified date for the birth of the mythical figure Jesus. 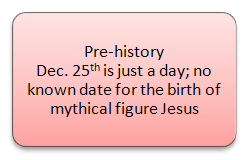 2) By roughly 4,000 BCE pre-historic astronomers and astronomers in early Egypt developed calendars, noting that the shortest day of the year (in terms of amount of sunlight in the Northern Hemisphere) is close to December 25th (actually Dec. 21st).  Their calendars obviously don’t include a month called December. 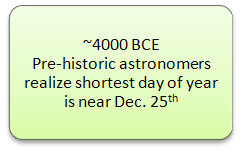 3) ~648-330 BCE – Using the Egyptian calendar and basing some of their beliefs on those of the Egyptians, the Persians developed a belief in a sun god named Mithras, whose birthday fell on or around the date we would now recognize to be about December 25th. 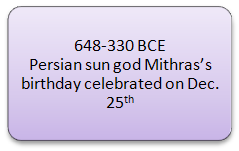 4) ~100 BCE to ~300 CE – Romans celebrate a winter festival called Saturnalia, which celebrates the opening of the temple of Saturn.  The festival starts out as a 1 day affair on December 17th, but eventually turns into a week-long affair, running through December 23rd.  The festival is marked by giving gifts, feasts, and parties.

5) 274 CE – A new Roman festival is introduced called “Dies Natalis Solis Invicti,” which is basically Latin for the “birthday of the unconquered sun god.”  Solis Invictus was the name of the sun god and a celebration was held in his honor on December 25th, decades before Christians began celebrating Christmas.

6) ~200-400 CE (estimated dates; probably range much wider) – Prior to their Christianization, Germans and Scandinavians practiced polytheism (a.k.a. they were pagans).  One of their celebrations, possibly influenced by Roman celebrations, was the festival of Yule, which took place around December 25th (exact dates aren’t clear).  The festival included sacrificing animals, burning yule logs, singing yule songs, and decorating with evergreen boughs.  Other than decorating their temples and the men with the blood of the animals sacrificed, many of the traditions from Yule celebrations have been incorporated into modern Christmas celebrations (Too bad about that blood decorating thing…  I’m sensing a new holiday tradition here!).  Yule is also the root of the word “jolly.” 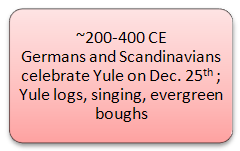 7)354 CE  – Historical records make first mention of Christians celebrating Christmas as a festival, probably near December 25th and overlapping with other Roman festivities. 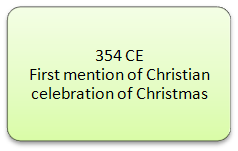 8) During the 1200s CE, Christians began incorporating elements of the Roman festival Saturnalia into their new holiday, Christmas.  The festival of Saturnalia becomes the 12 Days of Christmas.

9) During the 1500s a character is introduced into Christmas celebrations named Father Christmas.  He serves a variety of roles, but he is generally just seen as a jovial old drunk guy.

11) Christmas undergoes little development until the middle of the 19th Century when popular authors like Charles Dickens, Washington Irving, and Clement Clarke Moore write about Christmas.  In their stories they invent many of the traditions and meanings that are now associated with Christmas – stockings, Santa Claus, family dinners, Christmas trees, gifts, etc.

12) The creation of the new traditions by 19th Century authors also begins the commercialization of the holiday, which is quickly embraced by the rapidly developing consumerist culture of the United States.  Corporations latch on to the idea of an end of the year spending spree, which is beneficial for their bottom line.  Smartly, they wrap this in altruism – it’s always good to give, right? 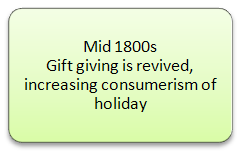 13) Also created in the middle of the 19th Century is the modern-day conception of Santa Claus, who was drawn by cartoonist Thomas Nast.  The idea is rooted in various European traditions of a gift giver, which is probably rooted in older traditions, perhaps representing the mythical magi who gave gifts to the infant Jesus and other Persian and Roman myths. 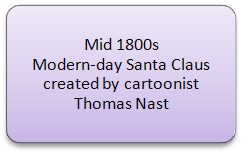 14) Christmas became a federal holiday in the U.S. in 1870.  It wasn’t until the late 20th Century, however, that religious fundamentalists in the U.S. began to decontextualize Christmas and turn it into a part of their culture war.  “Decontextualize” means they removed the context of the holiday.  The context is everything outlined above – the fact that it is based on various other holidays stolen or co-opted from other religious groups.  Once you remove the context of something you get to assert that it has only one meaning – a celebration of the birth of Jesus.  This is actually a very clever ploy by religious fundamentalists and political pundits to monopolize the meaning of a term and then use it against moderate Christians in their culture war.  It makes moderately religious people feel guilty.  My thought here is that religious fundamentalists want to use this to attract more moderate thinkers to their way of thinking, building their armies of followers. 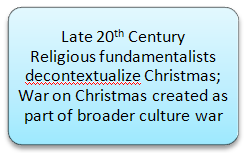 15) Several years ago a group of atheists, agnostics, and humanists decided they didn’t like the consumerism associated with Christmas.  They also decided they didn’t like the religious themes now attached to Christmas. They created a new holiday that falls between the Winter Solstice and December 25th called Human Light Day. It is a celebration of humanity.  Some give gifts; some decorate in ways very similar to Christmas.  Some sing songs.  It’s basically a secular version of Christmas.  In a sense, December 25th has come full circle – it started out as just another day, became an important date for a bunch of mythological deities, and has now been returned to just another day. 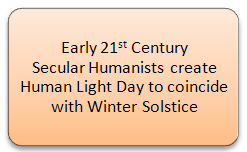 Syncretism is the key to understanding Christmas.  Christmas did not just pop out of thin air the day Jesus was born.  No one knows about Jesus’s childhood nor when he was actually born.  So, the holiday couldn’t just spring up to celebrate Jesus’s birthday given all the unknowns.  Also, the evidence suggesting Christians slowly pieced together a holiday out of prior religious festivals is quite compelling.  You can thank Scandinavian and Germanic pagans for: yule logs, Christmas songs, Christmas trees, and Santa Claus.  You can thank pagan Romans for gift giving, feasts, and parties.  And you can thank 19th Century authors and profit seeking corporations for: Santa Claus, gift giving, modern decorations, and the rampant consumerism of the season. 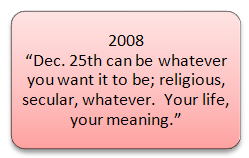 Now, for my contribution.  Given the fact that Christmas has been constructed, reconstructed, and even deconstructed by various groups over the years, that means the meaning of the holiday is fluid.  The claims of religious fundamentalists and political pundits trying to boost their ratings aside, the true meaning of Christmas is not the birth of the mythical Jesus.  The true meaning of Christmas is whatever you want it to be; religious, secular, whatever.  It’s your life; you get to give it whatever meaning you want.  No one has a monopoly on what Christmas can or does mean.  Yes, the word historically refers to “Christ’s Mass,” but there is no reason it has to in your own mind.  After all, how many Christians associate “Yule” with Odin?  You can turn Christmas into a purely secular holiday that includes no thought of the mythical Jesus, or Mithras, or Odin, or Solis Invictus, or any other god whose birthday has been celebrated on that day.

I think the true meaning of Christmas should be more akin to that created by secular humanists: A day to remember that we are all humans, to celebrate our relationships, both immediate and distant, and to reflect on our common goal to see our species survive.  That, to me, is what any holiday should mean.  But, the beauty of understanding that a holiday’s meaning is fluid is that you get to decide for you. I hope you have a happy holiday season, whatever that means to you.

Here’s the complete history of Christmas in a single chart: 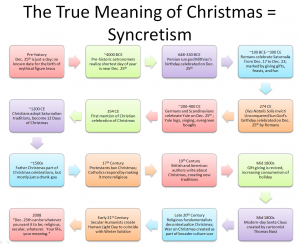 I created the chart in Powerpoint (1 and 2).

14 thoughts on “The True Meaning of Christmas…”